At last it's official! Let the blame throwing commence. 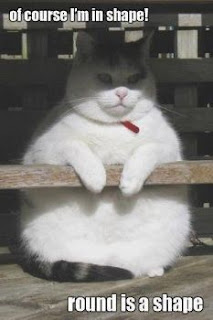 Round is going to be flatround if he insists on stopping in front of me for absolutely no reason at all except that he can.
Cat logic should be a valid subject for University study, it beats any logic being spouted by our politicians at the moment.  From the 'oh my God, we've been cyber attacked by criminal hackers' we have now come to the facts of the crash of Census night.  They didn't have enough of anything that could handle the amount of traffic rushing to the site, in fact some code was written 30 years ago.  The poor bloke they handed this steaming pile of merde to is so new to the job I doubt he could find the men's room for a panic stricken pee.  Them in the Government starved the ABS of funds to buy new computers.  Their answer to that was to cut some of the questions, cat logic in action.  I should link to the Age article but they also reported that obese people live ten years less/fewer (should satisfy the grammar critics) than skinny people so I don't have time for that.

"HEADS WILL ROLL" was Malware's reply (straight from Hunger Games script) to this dastardly attack but this was before the facts were made public and I wonder how his NBN performed on the night in question.  Could we have a new Census about that?  Not trusting him in the slightest, I filled out my terribly, frightfully important few pages with a trusty pen and will post (laughter at trusting AustraliaPost) it tomorrow if it's not raining, I mean it's not like it's urgent now.

One 'somebody important' who's name I didn't get, asked why not another page (before the truth came out) about equal marriage, to save 160 million bucks on another time wasting exercise, why not a few questions about how many pets in the home, how many of your kids are on the computer at this minute, obviously for the rich who can afford more than one, who can afford the electricity and the NBN, what did you have for tea obvious cat logic to weed out the obese, paleo nuts and the rich dining on Wagyu beef.  So now it's all out in the open except for the public beheading and rolling.(ooh look a shiney new Coliseum)  And don't sit at the back and snigger, Abbott or ring your mate Hockey boozing his way around Washington, because this stuff up started with the two of you.

Which reminds me, I can't wait for Hockey's book on 'Doing Washington on $5 a day' because he is such a great money handler.  So sorry, Mal and Barnaby head of the Australian Buggeredup Statistics, you have done it again, scaled the heights of political logic when you should have gathered a flea bitten mob of alley cats and listened to their logic instead of the lounge lizards in the Parliament booze circle.

I used to work with the ABS's Chief Statistician. Goodness he has aged. And not well. I suspect this week is just the icing on the cake of the last few years...


Homos want to get married, what should I care? Dogs get married in America. What I'm against is homos raising kids, I can't think of a more selfish act.
You think this is all the bible, I don't read the bible, I read the TV guide, that's all. And the Watchtower. Adventists are around here all the time, old ladies, promising me meadows full of fruit trees. I'm polite, but I get rid of them. Mormons are worse. Very determined. One day some blokes were trying to get in my gate. "Hoy," I yelled, "bugger off!" and it was the cops, plain clothes. I thought it was the Mormons. True.

I did my form early, before the crash, but if my information was lost in the crash, I'm fine with that. They want to know too much anyway.

Washington on $5 a day? I'd line up to read that. I enjoy fiction.

love you Coppy - you could make anything sound funny. the guy before the new guy told the govt that the ABS could not handle a 2016 census, so he's gone. mine hasn't made the postbox yet.

EC, working with the last few political parties would have not aged me, killed me no doubt. Maladroit is really showing his lack of anything, guts, brains, balls. At least with SpeedoMan you got a laugh.

Dear Mr Gray, our politicians, politics and public servants all serve to make us laugh, it's either that or opening a vein with a scalpel.

Robbert, it's only selfish because dorks like you haven't dragged yourself into the 21st century and seen the value of a loving family of gays. Some of those kids on Nauru wouldn't care who adopted them as long as they were off that hellhole.
My father used to say the Watchtower used to make the best toilet paper. I haven't seen a Mormon contingent in years, they must all be in war zones being human shields, all they're good for.

River, I've just posted mine and this year I was a Buddhist. Hockey is still obnoxious but he's in good company with Trump.

Annie O, I bet your paper was a triumph of sheepsheet. I mean how many addresses have you had in the last 5 years? And I hope you put down that you are a poor pensioner and your only mode of transport was a goat and cart.

The Watchtower makes good shit paper, a homo wedding certificate would do better, for all it's worth. How many dads did you have, some toddlers have two, both arse fuckers. Isn't that lovely. (Or should I be so honest?)

I could mince words, say it nicer, I've used schoolyard language instead. Homosexuals should not be raising kids. It's wrong. They know it, and you know it. Every school kid knows it, the entire world knows it, so how the hell did this ever come about?
I don't care about homos one way or the other, I don't believe they should be persecuted for it, but they are. And they're laughed at, lampooned, made fun of. However you feel about that treatment, you can't deny it's true. The world is heterosexual, I have to tell you, no one knows that more than "gays". What a cheek they've got, selfishness, arrogance, insensibility, to demand a right to put kids in a marginalised situation. They love these kids? Good, that's useless.

I've never insulted you, you're crazy to insult me. Crazy's the boat you're on.

If you think this is religion-based you're wrong. It's not that simple, not that easily explained away. None of my thinking is religion-based. I'm a bad example of a Christian anyway, breaking most of its principles all the time. I'm not even a good lawful citizen. Really, my opposition to this is from my heart. Kids shouldn't be placed in this sort of position. It's not worth the risk. Sorry.