You knew I'd be back although it's been a crap year so far. 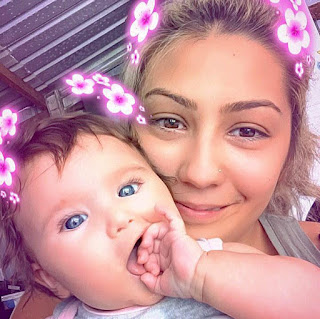 I just could not help myself, I had to post this photo.  Aren't they gorgeous?  I love that my granddaughter looks so serene and happy as a mother almost as though she's found something that she didn't know she needed.


We are up to the Year of the Rooster but I feel I'm being pecked to death by money grubbers not birds.
First a letter from Optusnet saying they will not be supporting 2G phones past March. Mother has a 2G cheap pre-paid mobile.  It's easy she presses one button and gets me but not anymore, they won't put any more money on pre-paid.  So now a pre-paid cheap Optusnet phone has to be bought and I am not teaching her to use it.  I'll get them to put in the sim card which I have to pick up at the Home on the way to Southland and my home phone number on speed dial.

I had another call before I left on Tuesday.  He was doing eye testing at the Home and mother had picked out lens and frames, a bit of a cataract, two degrees deterioration and that will be $500 please.
This is an aged care home, pensioners, half of whom wouldn't have a clue what he was doing. I asked him if they were gold plated and he gave me a discount of $60, that'll be $440.00 please.  Now I hadn't been informed he was coming, Mum has her own girl who knows how to handle elderly people but she isn't allowed in anymore only if affliliated with SCcare.  Mum's a bit deaf in one ear so probably only heard half of what he said.  Arrives the daughter in a filthy mood because my foot is hurting.  They had put up an eye chart which mum couldn't read (not the only one to complain) and then handed some frames to try.  Can anyone tell me why you would take frames already fitted with prescription lenses and expect old people to be able to see in a mirror?  It isn't polite to go someone who is smaller than oneself but it took him 2 seconds to hit mum's room with the frames.  The frames that he said she picked out were absolutely revolting, too small and almost black and on a face as white as a sheet, they didn't look good.  She didn't like them and was certain she hadn't picked them. I made him go through 15 frames before I was satisfied and she looked good.  She always has a pink tint and he didn't want to do that.  She has a large black spot just between the eye and nose, we know what it is and it isn't being touched but the frames mustn't touch it.  That will be $440 please, not until I'm there to make sure they fit, she can see through them and they have a pink tint. I really will have to stop watching Vikings.

Then there's next door, the new neighbours.  A letter in the box informs me that want a new fence as soon as possible and my share will be........but my share won't be that because the fine print says owners must removed all tree roots, rocks and shrubs which would cost me in the region of nearly $400 to get a gardener (Mick the Mower just mows) and I know there is one shrub which is holding the fence up and it's a beast to cut.  I've cut it right to the ground at least 3 times and back up she comes.  Ivy all along and over, Lillypilly tree in the corner with roots underground.  And then in the finer print, when they are digging the post holes, it's $20 for every rock or root they come across and I know there's a mound of bluestones  up the side way thanks to stupid ex. Also $500 to pull the fence down and remove.  I've told them I have no money, none especially for a gardener, they don't have trees right on the fence.  Now hernextdoor has taken photos of the fence and will get involved and that's when I will lose either money or a limb.  We'll talk it out over the weekend and he can see what's involved on my side, poverty, his side, two grown sons and him with salaries.

And for the cherry on top, Bank of Melbourne has fixed my mother's ATM card so that if I use it for her bits and pieces, the money comes out of my account instead of hers.
If you hear of a woman being arrested at Southland tomorrow, you'll know who it is.

And mother is back on oxygen, ventolin and antibiotics, thank you, Year of the Rooster.

Sigh.
And hiss and spit.
LOVE, LOVE, LOVE the photo of the next generations though.

YOU could probably do better with that Oxygen, Ventolin + AntiBiotic supply.
Should have gone to Specsavers where my prescription and frames were half ya Mums. Kickback Collu$ion by SoCross Homes? It is def Elder Abuse and govt has a hotline for that.
The other shocking thing is pop-up clothing rack sales to residents. Of course they R gonna buy stuff they don't need.
Hope you can fix her card so that your bits n pieces come out of her account.
Thank Baby Jesus that Cmas is behind us, and oh yeah, the baby is too cute, the young mum is lovely too. WE were lovely young mums once. Gather ye rosebuds while ye may dear grand-daughter.

Doesn't your great grand daughter have striking eyes. Yeah, had to get in ggd to make you feel really old. If I am a great uncle, all must suffer. The fence is a really hard one. A number of years ago Mother had a similar problem when units were built on a vacant block next to her. She wore the developer down with her recalcitrance and he paid. There is something like a fence tribunal, perhaps under VCAT. I wonder how they would decide such a case when someone has no money, and the fence I guess is still standing. So generous of you to be paying for your mother's bits a bobs from your own money.

First things first, get to Bank Melbourne and get that card fixed toot sweet.
Second; why s some random man wandering into care places with ready fitted frames? Are they old glasses that people have handed in? The ones that usually get sent to third world countries? Sounds fishy to me.
Third; the fence. If THEY want a fence so badly, let THEM pay for it, since you clearly can't pay your share and they know it.
Lastly, and this should have been first, how did I miss this yesterday? I could have spent half the night looking at the sweet deliciousness of those lovely faces.

The card is now fixed and mine had been linked to Mum's account and I think it happened when I unlinked my Medicare card from Mum's account. In the reign of Malware, one must dot the i's and cross the t's.

I am not paying for the fence, there is only one paling that's dodgy and besides I'm so poor there's not even an ice cream in the freezer. They can take me to Vicat but I don't like their chances.

The notice for the testing for glasses is on the notice board but way up top nearly to the ceiling and I never look at anything except a chair to collapse in. I looked today and complaint going in but gee, no complaint forms to be found.

I should blog this but so tired. Mother is on ventolin and oxygen at the same time, antibiotics as well but she looked very grey around the mouth when I left and I think she had a temperature. I'd been to Southland and the Home, 10 a.m to 4.30 and bitch sister rings and says, anything happening?

One Christmas present has been sent out and youse lot can wait for your surprises.

oh I hate when people who do nothing say "what are your plans for today" when my To Do list is a mile long.
Still nervy is putting it mildly thank you darling.
You must visit lovely Victorian Cat Politics blogger Anne S who meshes puter technology with Mercury being retrograde and she also had some dumb luck this week and I am sure it is astrological.
mwah mwah
oh and re the comment by Andrew: If I ever have to face down VCAT I want his Mum to pose as me and dumbfound them with her ... her ... whatever that is she has that makes the highrisers re-arrange their whole timetable to suit her

Annie, while her grandchildren call her Nanny Fud, for fuddy duddy, R, who has had a half a working life of dealing with old and disabled people says, he has never met anyone like her. Mostly for her manipulation skills, which don't really work on her children, but do seem to on everyone else. Mother would be a very good VCAT advocate. Honestly, when she was in hospital we saw a side of her we never had before, where she ordered hospital staff around to suit her purpose. Always kindly and nicely expressed, but there was no mistaking it was an order. It mostly worked.