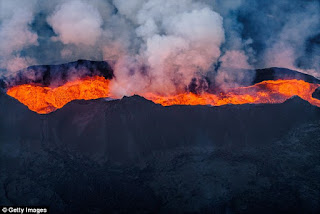 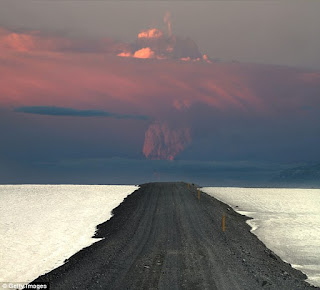 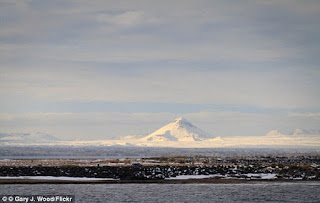 Pall Einarsson, a geophysicist at the University of Iceland said that Katla, Hekla, Bardarbunga and Grimsvotn are restless.

Katla is the least recently-active volcano of the four, last erupting in 1918 but is now shaking with over magnitude three tremors. It averages about two eruptions each century. It's especially dangerous since it is partly covered by the glacier Myrdalsjokull which fills a caldera depression and covers the eruptive vents so when it does go off it releases hot molten mud flows called Lahars.  These are uber Lahars, the last eruption in 1918 extended the southern coast by 5km just with laharic deposits.

Hekla, otherwise know as the "Gateway to Hell" has been quiet for 16 years but data collected in June last year revealed it is building up magma, and it's internal pressure is currently higher than before its last two previous eruptions.  It's ready to go, erupting once every 10 years, from 1970 to 2000, it's been dormant until now. Professor Einarsson said that tourists should stay away but what do you do with the 20-30 planes full of passengers flying right over the top of Hekla every day.

Bardarbunga volcano had a red alert issued at the end of August 2014 to February 2015 when it experienced a small eruption but only because it lies underneath the Vatnajokull glacier. The volcano sits in a 700metre caldera beneath ice but the majority eruptions come out of the fissures in the side. Not small fissures either, the Veidivotn fissure extends for over 62 miles to the south west almost reaching Torfajokull volcano while the Trollagigar fissure extends 31 miles to the north east towards the Askja volcano.
The last eruption was the strongest of its kind in Europe in more than 240 years and with earthquakes starting up, it suggests that magma could be building below the surface.

Grimsvotn is a near neighbour to Bardarbunga and likely to be fuelled by the same source of magma.  It erupted in 2011, sent a huge plume of ash skywards leading to flights being grounded.  Seismic activity is steadily rising.

These are only four of the volcanoes that dot the island of Iceland.  Between the lot of them you have just about every kind of volcanic activity documented.  All we need now is for the other side of the world to start rumbling, Yellowstone is already doing that but I mean rumbling in a really vicious Presidential kind of rumbling and then I might worry.
Posted by JahTeh at 1:43 pm

Four volcanoes getting ready to blow?
FOUR??
If they all go at once, we'll probably see the fireworks from here.

Knowing what they know, will people be smart enough to get out of the way while they can?

I've been to Iceland - it's am amazing country with a population smaller than Manchester. Sadly we only went for the weekend but the parts of it I saw were like a lunar landscape.

I want to go again and see some of the volcanoes - one of them grounded all flights in Europe for a couple of weeks a few years ago.

Reykjavík is an is a wonderful little city - I have never seen so many tall blond people in my life.

Lucky Plasman, I know that volcano, what a swine of a name to memorise and pronounce. I suppose they get used to the tremors and rumblings but I'm not sure I would, still some spectacular photographs have come out of the last couple of eruptions.

Davoh, If this is Gaia shrugging I'd hate to see a full blown sneeze. Fascinating when you look at the map and see how close they are and what would happen if all the magma chambers filled. Any Viking blood in your family line?

River, we mightn't see but we surely would hear the bang. Remember how the boom from Krakatoa went right round the world. The seismic technology is pretty spot on these days so I would say those tall blond people would have a boat or two handy.

Viking? JT, um, would you believe that have researched the male family line back to Lincolnshire 1580. At this point, given the 'family' name - am more inclined to think of any ancestors further back as "Saxon". But hey; a "vik" is a 'traveller' - so one never really knows.

I haven't gone that far back but with German on one side and French on the other, I'm probably a bit Saxon too. My cousin has done a lot and it turns out that one of the relos was a gifted boot licker and after killing enough Irish was given a castle there by Oliver Cromwell,


Andrew, I really hope your travel plans won't be blasted to Kingdom come but just think of the blog fodder you'll have. Don't forget to pack your running shoes, the heat resistant ones.

JT; wouldn't worry about ancestry too much. An Australian is an Australian, We are who we are.

BTW, if, and it's a big if; i travel back to Melbourne again .. would really like to turn up on your doorstep and A/. say hello; and B/say hello to .. everyone on yer blogsite (including RH, but hey... perhaps am living in fantasyland).

Thanks for the volcanic eruption update. Scary.
I don't like to think about Yellowstone as I'd be toast.
Thanks for visiting my blog. It's nice to meet you.

Belva, always there's talk of Yellowstone ready to blow. I watched a great documentary on Yellowstone, the springs etc then the group went riding in the country around and it wasn't until the guide pointed out little swirls of mist and said it was underground heat rising. It was miles away from the big action spots.