I think I'll have a right bitch today! 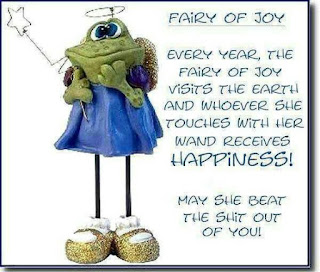 Before the bitching, a laugh. I sent this to Antikva and apparently she not only beat the shit out of her but used a 4x4 to do it.  This year the fairy of joy didn't visit me, I got the fairy of crap, the one that carries a forever emptying bucket.

Mother was nearly killed last week but the fairy of longevity saved her...again.
It was serious this time.  She's a large lady...tv programme said it's not our fault, it's in the genes....so she must be put in the wheel chair using a lifting machine which is hard to move at any time let alone when she swinging on the end of it.
The idea is to drop her gently into the wheel chair which is hard to move, I don't even try. I nearly fainted when she ordered it but the 6 grand it cost has been worth it.
The two newbies managed to tip over the lifting machine as Ma hit the chair which also tipped so she was halfway to the floor with two heavy machines ready to land on her.  She screamed for the RN in charge, no joy there, and had to tell them how to get everything back upright. They are supposed to have been trained to use these machines. She managed to sit upright in the wheelchair but she was very shaken, 10 minutes later Doc Marvin came in and got a week's worth of mistakes and pain. He was furious for the same reason I was, her heartbeat is fine but a shock like this can make it go haywire and those two idiots walked out and left her without getting the RN.
Anyone thinking of a Home for their elders, don't bother with Mercy Health, they're mongrels and worse, pious mongrels.  When mother does go, I intend to paint a moutache on every nun in the ten foot mural opposite her room.

It appears that my granddaughter, mother of that gorgeous tot in the last post has become an anti-vaccine campaigner. Nothing more I can say about that.

My sister was always forgetting to keep the nephew up to date with shots. I saw what rubella can do let alone measles. He had to stay in a dark room, be carried to the toilet with a blindfold over his eyes because he couldn't take any light at all.  He contracted chicken pox a few years back, head to toe pustules and it was only recognized at the hospital by an elderly nurse, one who'd been through the epidemics.
And if 'E', his partner is still rummaging through my blog and tells him I've been writing about him, go ahead, flattening you is next on my list to flattening my sister.  This idiot tart , woman has caused the only two screaming matches between the boy I brought up as my own.  I don't hate her, she's just on my invisible persons list.

My sister is another invisible person especially now she's gone to live in the Bogan State.  I rang her about mum, she hasn't bother to ring her and see if she is okay.  Too busy sending me photos of her new living space, couldn't call it a unit (go on 'E' send an email and cause trouble). It has nothing which suits her personality since she apparently left her brain in Melbourne.  Her happy news  when I rang was that she only lost $1.25 off her pension when she moved to Jungle World. I really really want to smack the smugness out of her.
Especially when she tells me to forgive and forget my ex-daughter in law.

I don't see the point in forgiving something that is invisible to me.  An excruciatingly vile, lying dunghill of inhumanity who is now a loving born again Christian.  Rubbish, it's like coating a viper with chocolate, the outside is okay but the poison is still waiting for a bite.  Boy, I'm on a roll today, anybody else want to go on the invisible list.
Pauline Hanson, who wanted to make it illegal to say nasty things about being white.
The Shooters Lobby who want the gun laws watered down. Now there's your worst nightmare, Pauline gets a gun but as long as someone doesn't tell her which end fires, we'll all be safe.
Morrisson, our PM who has just said he was sorry for the abused children who lived in horror.  The same PM who is abusing children living in horror on Nauru, got to love a man with two faces and no brain. I really shouldn't say 'no brain', put him up against Barnaby Joyce and he looks like Einstein.

Ranty post but as Shirley McLaine says in Steel Magnolias, I'm not crazy, I've just been in a bad mood for forty years.
Posted by JahTeh at 1:53 pm

And to add to the Morrison list of failures. He compared the Liberal party to those competing in the Invictus games...
You are not alone in being in a fearsomely bad mood. You have more justification, but I don't care. I am hissing and spitting for all I am worth.

You know how people say "look on the bright side"? I can't see a bright side here. Especially the new anti-vaccine person. The laws on vaccines are being changed and children who aren't jabbed may have to miss out on day care, preschool and possibly kindergarten. Family benefits will be cut by however many dollars the bigwigs decree too.
I've had a couple of bad mood days too, but I just can't help bouncing back to happy. It's my default state.
Are you enjoying The Brokenwood Mysteries?

El Chi, what an idiot. The Liberal Party is more like the Mad Hatter's tea party nowhere near the soldiers competing. I don't know what planet he thinks he's living on but I don't think it's the same one we're on. I haven't seen the latest on Kerryn Phelps but I want to see her take chunks out of Abbot in Parliament.

River, she had a film on Facebook about how they make vaccines out of the cells of aborted babies and I couldn't go any further. I was curious about what disease this would help but it was too sickening to go into. And I thought she had brains but it seems that it's her mother's brains she has.
I haven't watched Brokenwood because I lost the thumb drive but didn't lose it,I put it back in the box so I wouldn't lose it. I just never thought of looking in there, I'm losing my mind and half the time I wake up and spend 5 minutes working out which day it is. My default state is half way to insane.

Oh wow the fairy of joy is sure to lift my spirits when I'm having a blue day! Thanks for sharing Jah Teh. I think venting is not only healthy but good for the soul. Hope your Mum is ok and your precious great granddaughter's mother gets her vaccinated or as River said there will be consequences - at least here in NSW the changes for preschool and school enrolment have.

CG, I've tried visiting some of these anti sites but I can't believe that people can be so gullible. I blame it all that stupid doctor in England who said vaccinations were responsible for Autism.
I do hope the Joy Fairy visits you before the Christmas insanity.