I love a surprise

A surprise like actually getting out of bed, dressing, hair done, check emails and all ready to hit Southland.  Then a phone call and a visit from granddaughter and two great granddaughters and their father.  I was very quiet as I mumbled, "is your bloody mother coming?" and no no no, Yahoo!
First I had to rush and throw everything off two chairs for them to sit down. The baby is utterly gorgeous and bawled at the first sight of me, cats do that to me as well. Little Clio will be 3 in September but she's as bright as a 4 year old and speaks beautifully. Lovely housekeeper as she picked up a box and went over the carpet like a dyson on full power. I gave her a butterfly box instead and she made sure everything went into it.  I said she could play with the frogs which I thought she would, being all glittery but she put the frogs to one side and played with the rocks instead, her grandfather's genes.
I was going to go out in the morning because the sky was blue, not a cloud but by 4 o'clock it was freezing and I was coughing up ice again.  The little family was calling in to the nearest op shop to find gloves.  I automatically picked up the phone to call mum but I bet she was watching anyway. 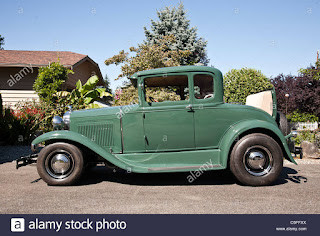 Now I'm really showing my age.  Anyone remember a rumble seat?  I'm addicted to the show American Pickers, I mean anyone who adores a hard rubbish collection would love this show where experts teach you the history of rubbish as they trawl through the sheds full of old crappy stuff.  So they came across a bright yellow car like this which I would love and a memory surfaced from so deep I thought it might need oxygen and resus.  I rode in a rumble seat, just around the corner but it's the first time I've remembered it and me, who can't think what day yesterday was.  I've just taken a week to remember a piece of music, the name of it and the composer.  Anyway back to the rumble seat, it was cold and windy and even for a kid, uncomfortable. No seat belt, no helmet, nothing to hold on to and did I mention COLD. Once again I reached for the phone to ask mum, no dice and now I'll never know whose car it was. At age 6 we should be given a piece of paper with set of questions to be asked and answered before the parents leave us without knowing everything. By age 16 we think we know everything and curiosity about XXXXX takes over.  At 66 there are things we're never going to tell our kids.  I think Mediumship should be taught up to PhD level.  I want to know about that car.

WONDERFUL news. And yes, your mum was indeed watching. And smiling.
I hear you on the unanswered and unanswerable questions too. Some days I would really like a hot line to the other side.

I like surprises too, love it when it involves the ones I care most about. There are times when I could go back in time and just talk to my parents. I do think they are always with us. My Dad was a great gardener and last week I am sure I had his help pruning the dwarf peach much better than I have before,it always seemed beyond me.

How lovely to get such a visit. I'd like a few questions answered myself, but that's never going to happen. Even my brother doesn't know the answers. He's been living in Adelaide for three years and when I showed him the family tree book mum made for me, he was very surprised as she hadn't made him one, so I let him photocopy the pages. We both have different versions of the stories mum told us.
anyway, can you write a letter to the newspaper about the yellow car? here in our Sunday Mail, we have a "Can you help" page where people write in wanting answers to all kinds of things. Maybe your Sunday paper has something similar?

Children are bandages for our souls, dear JahTeh. It's good that you enjoyed this happy playtime with the little ones. I have no difficulty in believing that your mum and other ancestors were not only present at the party but also had a part in planning it. As one spins through the cycles of life, one glimpses patterns that suggest The Veil is lacy, i.e., full of holes.

I, too, rode in a rumble seat as a child. Even then it was a very old car and the ride was one of those "now remember this" experiences the parents staged, along with a ride on an ancient Indian motorcycle and a view of Civil War veterans in a parade. I remember all three very noisy events smelled strongly of cigarettes.

El Chi, I will have a photo at some stage but I've just had my hair cut and look like G.I. Jane, another week and I would have been presentable.

Cheryl, the rotten childhoods some of our parents had stopped them from talking about it to us especially my father. My mother still had nightmares in the nursing home about trying to outrun a grass fire as a little girl. Her mother just kept yelling, "don't look back".

River, it's not about the car, it's the owner that I don't remember. And now there's no one left to tell me. I know mum told me a lot more than she told my sister and she doesn't believe me.

Beth, really showing your age, Civil War veterans? Smells do often bring up memories, I always associate sardines with bag pipes. Mum was helping at a Country Womens afternoon tea hence the sardine sandwiches and I was eating one when a loud pipe band rounded the corner of the street. I'd never seen one before, must have been only 3, and I was so terrified I couldn't move. Never dropped the food though.

The last Civil War vet died in 1956. Granted, he was not the old gentleman in the convertible for whom I was waving my little flag but still…

Examining childhood memories from the perspective of adulthood can indeed result in odd discoveries, JahTeh. My father remembered his grandmother as a formidable old lady who spoke only German and ruled the kitchen from her chair in the corner. Among her "when I was a child" tales, she recalled peering through the pickets of her family's front yard fence, watching soldiers marching by, and being fascinated by their plumes. Decades later, he did the math and was amazed to realize grossmutter was reporting an event from the War of 1848.

How's this for a surprise?

Hi big thing. just popping in for a minute. What a car! I think it's a roadster, that third seat where the boot should be is what we call a 'dickie' seat. I almost bought a 1948 Triumph roaster with a dickie seat at Shannons Auctions a few months ago. I changed my mind about it then heard it went for only $23,000. I'd thought $30,000 upwards. Anyway, I'm glad to see you still up and growling, so please accept my fondest regards. Mother was lovely.

(Take care how you talk to me, I've got lots of money.)

RH, how nice to see you aren't dead and don't boast about money, the tax office will be calling. I'm actually missing mother, keep picking up the phone to tell her something funny. She'd be pleased to know you haven't kicked the bucket.
"lots of money" that would be great but you might also have a hairy back and tattoos and no amount of money can hide that.

Beth, 1848? Was that the Alamo or somewhere in Europe? What a memory she must have had.

1848 was a year of many revolutions in Europe, JahTeh. My great-grandmother's family was apparently caught up in the Prussian Rhineland Revolt and consequently established outposts in Switzerland and the U.S. My grandfather was her youngest, and the only child born in the U.S. My father grew up speaking Kuchen-Deutsch ("kitchen German") and served with other German-speaking American combat Merchant Marines in odd spots during WWII. Like so many others, he was told not to speak of his adventures until 50 years had passed -- and he did not.

I'm sure your mention of touching the past embodied in remnants such as the car has prompted other commenters to think of odd bits in boxes "somewhere in the house". How sad that some fabulous tales are lost when kids no longer spend time with their grannies...

I notice the rear wheels on that car are bigger than the front wheels, very unusual.
I watch American Pickers, Antiques Roadshow, and Bargain Hunt - all at once, flicking between them during ad breaks.
There was a time when the ladies could extract money from me, no worries. But I'm awake to them now, cunning little devils.
How's Miss Brownie doing, I don't see her here.