Our Country is burning to death 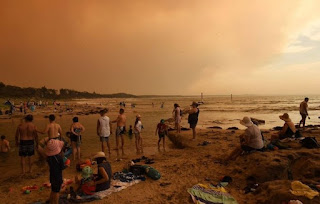 Not a photo of Mallacoota last night but another beach in NSW.  Mallacoota was like Hell described in some two thousand year old book that we are supposed to live our lives by in this age.

The people in Mallacoota were told to go to the beach and when the siren went off, go in the water with their bodies against the breakwater to stop the radiant heat from the flames burning them.  The small boat with two boys and their mother on the water went around the world on the front of newspapers and television screens.

I could only imagine what it was like.  What would I do? I don't drive, it was so dark from the smoke no-one could see.  All I would do was grab a woollen blanket, thick shoes, put the cat in his basket and load water for us both on my walker and try for the beach. I'd would have hoped not to hear that siren, not to have to try and stand in water holding a terrified cat.  But watching people help each other and a ring of firefighters holding back flames, I cried, sitting in my chair away from that hell.

Most of you know I had a boy who died.  All he ever wanted to be was a forest ranger, work in the bush, join the CFA, he was one with nature.  But last night I was almost glad he wasn't here because he would have been there, holding a hose but also saving every animal that came his way. I would have been looking for him in the smoke hoping for just a glimpse that he was still okay. I might even have seen him helping a lady with an old walker and carrying a fat white cat.
In all the years I don't think I cried as much for him as I did last night.  The cat and I just sitting together.

Heartfelt hugs.
If only the tears which have flowed since the fires began could be used to put them out. Or alternatively to drown a politician or two.

People of our age all remember really bad fires of the past. Even the 1939 Victorian fires were planted in our memories, but we have never seen anything like this. Of course inaction on climate change by this government, previous governments and around the world have nothing to do with it. No, absolutely nothing to do with it. Last word on Fire Fighting Nephew is that he was fighting small fires in the west of the state. I hope he stays there.

El Chi, so glad I can say I didn't vote for Scooter, what a coward. Now he won't even be interviewed on the ABC, he thinks they are biased. And we'll all be happy watching our heroes at the cricket including the cheating bastards they put back in the team.
If he thinks this will blow over and we'll forget, he's dreaming.

Andrew, it's the fact that these fires are joining up to make mega fires and these fires make their own weather. People who haven't seen flames like this can't believe the wind and fire can turn into a tornado like column and tip a fire truck end over on its back, that's what killed that young firie. I actually yelled at Dan Andrews on the tv when he said he'd requested the ADF help from scooter. So you've requested now go and take whatever you want and do it now. I want to know the brilliant mind who thought of helicoperting in fresh fighters and taking out the exhuasted ones. You couldn't do it in the smoke, too dangerous but doing it now. We need brains on the ground not morons giving firework parties.

I wish I was there to give you a hug. I'm crying buckets of tears too and wish I could throw them on a fire no matter how useless such an action might be. I simply can't imagine standing by and watching everything I own just melt away in the heat and flames, yet I see it every night on the news. And cry some more. And wish a few of the many lightning strikes would strike a few dozen of the arsonists.

River, I was just thinking of you and hoping the heat wasn't getting you down. There were a few arsonists but not out in the real bush where it was lightning strikes and small fires started with embers but joining up with the wind to be mega fires. Kangaroo Island's rare animals will mostly be gone. I loathe that vile scrote in Canberra who can do nothing without his religious mate beside him.

I visited your beautiful country in 2016, realising a 40 year old dream. My heart breaks when I think how these fires cause such havoc to your flora and fauna. The brave firefighters, I hope they keep safe.

Dear JahTeh, you and the fat white cat have been in my thoughts as even local media are covering the fires. My previous worklife involved some disaster preparedness drills as a responder, and I was horrified by the briefings that depicted the "negative outcomes" for elderly citizens who could not/would not leave their homes and pets. The best answer to the challenge seemed to be linking animal rescue groups with public transporters who knew where these vulnerable folks lived and how to shift them safely. My own bugout bag now rests inside a large pet carrier, complete with OUR back-up prescriptions and essential documents in a fireproof bag. And cash. Mum also advocated a stash of small denominations; Dad carried a carton of cigarettes as currency.

Annie, drivers leaving the fire areas are reporting not having one insect connect with the car windscreen. Birds are falling from the sky with wings burnt off. In one town they hosed the little bat colony to keep them alive. What does it say when a Koala not used to humans wander up to a bicycle club and almost beg for water. Most of our firefighters are volunteers and unpaid.

Beth, our Naval boats evacuating from Mallacoota took the elderly first for the beds and every animal as well. The smoke was so black that one firie put his hand above the roof of the truck and it disappeared in the darkness.


River, I haven't run the A/C because the fan is enough at the moment but the smoke from Gippsland is becoming thick. My cousin is in Gippsland living by a river which has a small island and he has been feeding the little Koala group there but the fires could head that way.