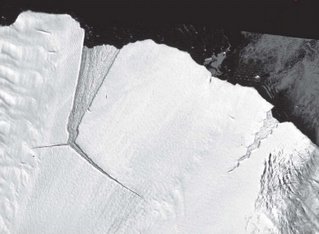 This is a part of the Amery Ice Shelf called the "Loose Tooth" which began breaking away about 10 years ago. The rifts seen above have been opening up and moving steadily at around 4 to 8 metres a day. In 2005, the same rifts were estimated to be rifting at between 2 and 5 metres a day. There hasn't been a major calving from the shelf since 1962-3.

The fracturing is like earthquake activity, variable and spasmodic. One rift lengthened by almost 200 metres over 4 hours. The rift bursts of activity are not directly triggered by either winds or tides but glaciological stress in the ice shelf.

The ice shelves are the floating extensions of the continental ice sheets and moderate the flow of ice into the sea and scientists expect a 30 by 35 kilometre area to break into the sea in the next few years.

Ice Shelf Research scientists left for Antarctica in December 2006 to study the "Loose Tooth" rifting using Global Positioning System units and seismometers to measure movement and to "listen" to the cracking and snapping of the ice shelf as it moves.

This is a long term collaborative project between the Antarctic Climate Ecosystems Co-Operative Research Centre, the University of Tasmania and the Scripps Institution of ocenaography in California.

The Australian Government chipped in with some loose change, $4.6 million.

The same Government is spending over $19 million on its terrorist hotline.

But there is no global warming.

Just the hot air coming out of Canberra.

When's the unveiling of the new photo? Will you be wearing a tiara? Will there be nekkid bits?
How about Australia Day and you can wear a flag, small, very small.

Ice
My grand abode,
From wanting everything.

(Well shit but this racket just ain't getting me my dream of an E-Type Jag convertible with Tracy Grimshaw in the passenger seat! ha ha ha)

Darlings "it has come to my attention" that my career as a blog-reply person has failed to advance my career as a poet, and may even be sailing it up shit creek. Therefore I have decided to go back to displaying my deathless Odes and etc only to my daughter and her friends, who laugh like mad at the love poems especially, but at least give me the satisfaction of making someone happy. I myself am not happy, and have not had a good laugh since my friend Ross W accidently burned down a big flophouse on Beaconsfield Parade then squatted among the remains for five weeks giving wild speeches from the balcony to peak hour traffic, until the balcony collapsed, fracturing his elbow, and his ambition to become prime minister.

So what does this mean, what am I trying to say? Well darlings, I have no idea, and never do, except perhaps that Miss Jahteh's blog may not win awards, yet is the most human from any person who ever kept a blog diary, and ever wanted to.

'Up shit Creek', not in a barbed wire canoe I hope. It's just Poet's block RH, you'll be back in your stride in no time, after all it's election year.

Cameraface will remain as such until there is a photo taken that shows his true beauty and youthfulness.

Where do you buy Botox Cameras?

Did you know you were nominated for a blog award?

A blurry picture with your old box brownie might do.

Blog award hey. Nice. Wonder what catergory? Most all over the place blog? (is this guy really actually interested in anything for more than five minutes?)