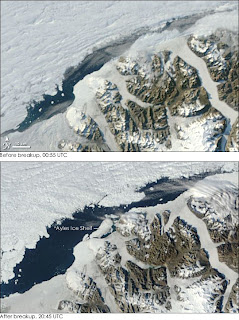 The first image above is of the Ayles Ice Shelf, Ellesmere Island, Canada in 2005 before the break-up of the ice shelf. The image directly below is the ice shelf as a new ice island 66.4km2.
The ice shelves in Antarctica and Greenland are fed by glaciers but the Ayles Shelf was made of compacted thickened sea ice approximately 4,500 years old.*

According to Dr. Luke Copland from the University of Ottawa's Laboratory for Cryospheric Research, almost 90 per cent of the Ellesmere Island Ice Shelves have calved and floated away since 1900. There is now insufficient new ice formation to replace what's been lost.
The calving of the shelf only took an hour and was captured in images by the MODIS satellite. As with the "Loose Tooth" in Antarctica, there were low frequency seismic recordings during the break-away.

As at January 2007, the Ayles Ice Island is frozen in the sea ice of north eastern Ellesmere Island. If it breaks free in the Arctic Summer and reaches the Beaufort Sea, its size could cause problems for shipping and oil platforms. 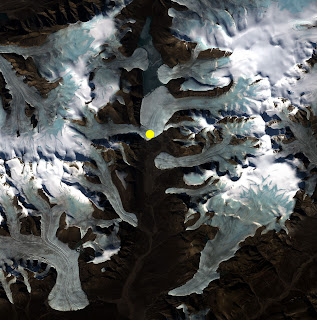 Ellesmere Island rang a bell when I was looking at the ice shelf images so I took to rummaging around in the foot high stack of papers on my desk and found this. It's a satellite image of the Borup Fiord Pass with its huge glaciers. The yellow dot marks a sulfur spring seeping up through the ice.

In June 2006, Stephen Grasby of the Geologic Survey of Canada led a team to observe these sulfur springs to compare them with possible sites on Jupiter's moon Europa. These sulfur rich springs are teeming with microbes and while it's not the same as Europa, it's close enough to provide a testing site for remote sensing and exploration techniques in the same way the Antarctic dry valleys provided testing conditions for Mars. (the report can be found at The Planetary Society's weblog)

See, I'm not all pretty boys and donuts and anybody in Melbourne tonight will know why I'm posting about Arctic and ice shelves.

I often put it up on the desktop just to look at it. It's why I love computers.

I've got an ice shelf too!

I never thought my dowager's hump would ever be useful but today - Eureka! - an icepack balances there nicely thank you God.

Not an icepack, get a packet of peas so it moulds to the shape of your neck and it's cheaper. I gave up on global warming responsibility and put the cooler on.