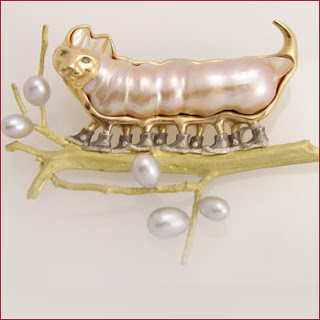 There's been talk of a discovery of a very large chunk of green diamond. While the colour is uncommon there have been a few found. Some like the caterpillar's eyes above are small, but in the photo below, this is one of the very large ones. 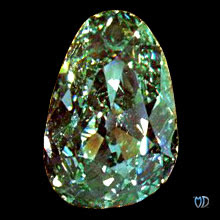 This is the Famous Dresden Green Diamond. It gets its name from the Capitol of Saxony where its been on display for over 200 years. The Gemmological Institute of America examined the stone in 1988. The quality diamond was found to be a rare type 11a and the clarity grade determined by the GIA was VS1 (first grading is flawless, then VVS1 and VVS2) and could be internally flawless, that is, extremely, extremely slight inclusions.
The symmetry of the cut and polish is very good for a diamond cut prior to 1741.
It's an almond shaped stone of apple green colour with a weight of 40.70 carats and set in an elaborate shoulder knot. It has a natural green body colour, not a green skin or scattered green patches.
It's believed to be of Indian origin and was purchased by Frederick Augustus 11 of Saxony at the Leipzig Fair in 1743. 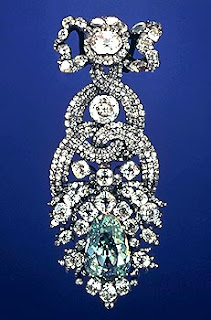 Noice but for really noice, check out the pear shaped Millennium Star below which took three years to be cut with lasers.
This is the world's only internally and externally flawless 203-carat pear shaped diamond. It belongs to the De Beers Millennium diamond collection which includes eleven equally rare blue diamonds totalling 118 carats. Now that's flashy. 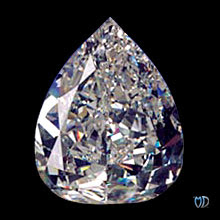 A Serious Rock
(and I don't mean Hudson,
Yes diamonds are a girl's best friend).

Tattslotto winnings are a girl's best friend. I put the kittycaterpiller up especially for you, I know you wouldn't wear flash.

I'm amazed how the green diamonds in the top photograph serendipitously managed to form the appearance of two eyes in a random, caterpillar-shaped object. A similar thing happened to an old biddy the other day down Fleetwood's high street when a car hit her and she managed to fall perfectly within a white chalk outline. At least that's what it looked like to me by the time I'd muscled my way to the front of the crowd.

It wasn't a Humber, was it?

I'm betting on it being that grand icon, a Leyland P76 - or one of its little brothers, the Austin A40 or that prized collectors' item, my personal favourite, the Volvo Minora.

Gee, I've never seen a diamond as beautiful, thanks Jt.

No...it wasn't a Humber, a Leyland P76 or any sort of Volvo...I already told you...it was a little old woman in a chalk outline.

My sweet Lady Ann
I've drunk the last can
I must take my leave
For flat broke I am.

Just hear this plea
My love
From Winchelsea
My love
Life is a dog
Without-
Lady Ann.

We are waiting for day you have the balls - errrr ignore that - afterall I did year 7 biology - yes I have had dissecting relations with that dead frog - to post pictures of the vice very regal family jewels.

Multi-faceted - yet at the same time uncut, internally and externally flawless, really noice and flashy.

Well they used to be flashy until we were forcefully ejected from the 10.40 from Falstaff Station by the boys in blue after a complaint from "Disgusted of Glen iris" - or possibly Constance E. Little of Eagle Point.

Fortunately De beers, who said in their glowing character referance that they had never seen such fine family pendants, came to the rescue and bailed me out.

(All of this is true, and don't even thinkabout believing anything that great unwashed Lancastrian soil scooper might claim - after all why would anyone you trust a base Uriah Heep of merde what sold his soul - and other minor body parts - to be the toy boy of the late 'Queen of Hearts.)

Now back to a soothing keg of Aldi's top shelf Sparkling Para Port.

Neo, it's a regal gem unlike the rest of my commenters who are as common as muck. Love the new squatter's acres, book me a tent.

After all that boasting M'lord, I now have a phobia about gnads and how could you infer that the emminent bog hopper has anything resembling a toy arrangement.

Rh, lovely poem and I've no doubt you would drink the last can.

Why do you attract such strange people?

(I only ask because I don't know)

I'd best clear something up (in case you think I'm Mick Jagger). Those lines aren't a poem; they're part of a song called Lady Jane.
I've tampered with them, but here's the original:

My dear Lady Anne
I've done what I can
I must take my leave
For promised I am.

Just heed this plea
my love
On bended knees
my love
Life is secure with
Lady Jane.

I mainly only mess up songs I like.
Drunkeness in other people inspires me to do it.

So beautiful... much more so in real life no doubt

LL, if I made a list, Lady Jane would be in the top ten.

Neo, when you say little ones, it's the boys not all the stray animals you intend to give home to, I hope.

LL and Rh, my sister's the RSs fan in the family so I'll have to see if she's got that song as I don't remember it. When the Stones toured here she wagged school and got herself to Tullamarine to scream and throw herself over the fence. Thought she'd got away with it until the six o'clock news and there she was filling the screen. I didn't often see my father gobsmacked but he was that night.

MC, that millennium stone looks fabulous but I'm partial to Argyle Pinks. Argyle diamonds are older than South African diamonds and harder and we don't use slave labour to dig them out.

Rh, if it weren't for Beau Brummell and his 'less is best' attitude, you'd be flashing jewells everywhere.

A company called Blina Diamonds (australian)found a green diamond not too long ago. It'll be in the asx announcements somewhere, with a photo. Apparently the green colour is caused by radiation. And if you heat it too much, the green colour disappears. Unfortunately, Blina discovered this when they put it in 600 degree acid to clean it.