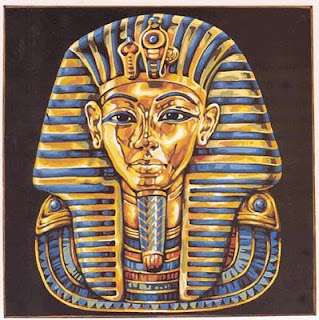 We're all familiar with the golden mask of the boy Pharoah, Tutankhamun, but it was only one of the thousands of objects found by Haward Carter.
In the Sackler Library at Oxford, there is a room where the humidity and temperature are controlled in order to preserve things not as durable as gold. The Griffith Institute houses the notes, photographs and diaries of the English archaeologist who discovered Tutankhamun's tomb in 1922. For 10 years, Carter catalogued the thousands of treasures stacked inside the chambers, but the majority of his work has never been published.
In 1993, Jaromir Malek started his work when he realized that of a total of 5,398 artefacts found, only a third had been properly studied and published. He decided to put all of Carter's notes online, the entire archive available for study. 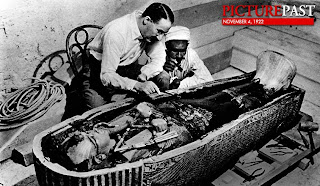 When Carter died in 1939, he had no collaborators left to continue his work. While the artefacts themselves are held in the Museum of Egyptian Antiquities in Cairo, the Griffith Institute has all of Carter's written records. He recorded his finds on more than 3,500 cards with additional notes by Carter's chemist and conservator, Alfred Lucas. There are also more than 1,000 photographs by Harry Burton, plus hundreds of fragile pages from Carter's journals and diaries and 60 maps and plans of the excavation site, one of which has the valley's contours with Carter's black-ink lines showing the dig site located in the deepest point of the valley where the floodwater dumps debris when it rains. This plus the fact that the later tomb of RamsesVI was built almost on top of it, kept the smaller tomb (after the first break-in) undisturbed.
Malek and his staff had to work in their spare time due to a lack of funding but in 1995, "Tutankhamun: Anatomy of an Excavation" became one of the first websites dedicated to Egyptology. 98% of the material is online with the last pages available within the next 3 months. 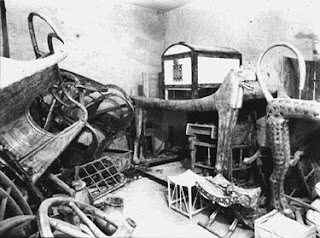 Carter, funded by Lord Carnavon, had been searching the Valley of the Kings for 7 years but only a few objects had been found with Tutankhamun's name but it was enough to keep the two of them searching. Years later, there were rumours that Carter had discovered the tomb early in the search but had kept quiet in order to explore the rest of the Valley, with Carnavon's money.
On Saturday, November, 1922, stairs leading to a walled up doorway were uncovered. A diary entry for the next day says "seals intact", a sign that the tomb was undisturbed. Carter's first look through a hole into the tomb was on Sunday, 26 November and by the light of a flickering candle he made out the images of statues, gilded couches, painted caskets, chairs and chariots.
Harry Burtonphotographed the team's progress, as Carter, worked slowly and methodically to catalogue the position of every artefact before removing them. The photos show a jumble of objects due to the burial of the boy king in a smaller tomb than he should have had plus the tomb had been robbed shortly after his death and the contents were shoved back in any old way before the door was resealed. The photographs on the database reveal treasures from a leopardskin cloak with a golden head and silver claws to a collection of green and blue draughtsmen. Burtan also photographed the stages of unwrapping the mummy.
Malek hopes that Egyptologists will begin to study in detail all of the artefacts, not just the luxury items but the everyday items to find out, not only what they were made of but how they were made and the techniques involved. Not only did Carter records exactly where each item was found but they were recorded and photographed almost immediately the tomb was opened, before any deterioration had begun. Museums at the beginning of the last century did not have the technology for preserving organic items which is standard now. If other Egyptian digs are entered into the data bank then cross referencing will make research easier.
http://www.griffith.ox.ac.uk/gri/4tut.html will take you there. 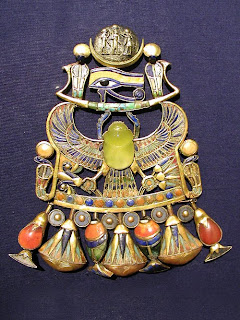 This is one of the treasures, a pectoral scarab ornament belonging to the Pharoah. It has at its centre, another mystery. To the west of the Nile, there is a patch of desert where Libyan desert glass is found. It sits on the sandy surface but is much older than the sand and is almost pure silica. The scarab in the middle of the ornament is the only piece of the glass ever found in Egyptian jewellery.

The scarab in the middle of the ornament is the only piece of the glass ever found in Egyptian jewellery.
This is, of course, yet more evidence that the Goa'uld imported it through the stargate to earth.
Or they got lucky when a meteorite hit the deck turning some sand into a purdy lellow blob of glass.
Yeah, the Goa'uld theory makes waaaay more sense :P

@Jayne, the meteorite is probably the correct theory, but I'm going with the Goa'uld/Stargate idea too. They probably brought in all that lovely jewelled gold ornamentation too. Then some of it got buried in the same tomb as Ra and Hathor, while the rest was gifted to the Egyptians.

Fellow 'Stargate' fans, FAIL.
One mystery site has it as the place where an intergalatic battle raged and fused the sand, another has it as a meteorite but now there's a new theory that it is the result of a strange volcanic eruption of hydrothermal origin. The big discovery of 13 'meteorite' circles is now judged as volcanic.

JB HiFi has 'Stargate' on special at the moment. I have one day to decide on food or Daniel Jackson.

I've been touring the archives, inspecting my comments.

I wish it were raining.

Optimism is a weather report.

Never mind, I've decided upon a title for my thesis:

That's it, that's what it's called.

Good things come to those who wait, the bad take some effort, I was never an artist, an historian, a fucking stupid social worker, being one thing through your whole life is waste, that's a very skinny man.

I don't want to go to bingo with you anymore, I get too depressed when you don't win, because you deserve it so much.

One day in Pentridge me and another young bloke were sent to clean up the Governor's back garden, because he lived there, in Pentridge, and we were given a cup of coffee made from all milk.
It was a fine lesson.

She'll have a job responding to all this. Might take her mind off Aunt Selma for a while.
Nothing will take her mind off Kitty Litter, or those damn bloody science postings. They're about as welcome as a pimp wanting bail money.

Just for that Robbert, you'll get another one. Life experience has been a bit lean as it's taken me 3 days to make a new bingo board for the old dears. Very flash, big numbers on rose gold paint with gold trim.

JahTeh, when it comes to choice, Daniel Jackson wins every time.
EVERY TIME.
Food can wait. There's probably a few crumbs in your pantry that'll see you through.....

I am absolutely blown away with the oldest of ancient egyptian treasures - there was such a simplicity and beauty and as the years passed this seemed to be lost and become a shadow of what it was and when the Ptolemys took over it was crap comparatively...