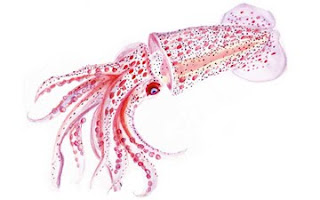 This little squid is an example of an asymmetrical organism. The cock-eyed squid belongs to the genus Histioteuthis and lives nearly 1000 metres in the deep ocean. It wanders up to 100 metres to feed at night and its body is covered in little photophores or light producing organs, which make the squid look like a little seeded strawberry. 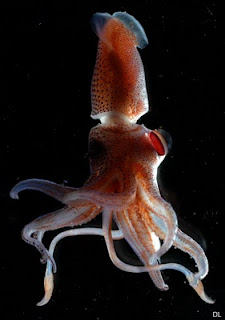 As for its other name, the cock-eyed squid that comes about because their left eye is two to three times the size of the right. Scientists still haven't decided why this is but sea lore has it as because the squid lives as far down as sunlight penetrates so the squid trains one eye on the illuminated downwelling water above while the other looks down into blackness.
****************************************************
I might be off line as I try to figure out what to do with the new modem to replace my wireless set-up. So far I have opened the box without mishap.
Posted by JahTeh at 6:14 pm

I say!
He's a pretty little poppet!
Y'know...he'd look particularly gorgeous on the top of the tree.
Especially if you toast him with a gin from a comfy chair ;)

To me they look like they're wearing particularly fetching chef's hats

You opened the box without breaking a fingernail? Well done!
That squid's a pretty colour.

Yum, I smell salt and pepper squid - next to duck a l'orange, one of my favorite vegetarian dishes.

MiLord, I thought of you immediately, one large eye looking down your aristocratic nose, one small eye upskirting.

River, don't get too excited, I couldn't find the CD they tell you to watch, it had slipped down underneath the cardboard. Swearing was heard.

Kath, I must try and find one that looks like a particularly delicious chocolate. Do you realize that your gravatar looks very much like that bug-eyed shrimp I posted about?

Jayne, it must be the Father Christmas otherwise the tree falls over. I counted 12 holes in the wall just under the painting and that 12 Christmases I've nailed that tree up.

What a little wierdie - amazing one eye bigger than the other

I still read his name and see "Mistletoe" :P

"What a little wierdie - amazing one eye bigger than the other"

Not so amazing MC.

Both knockers and knackers are rarely symmetrical. (Not that I have made a career out of studying them... well, not a paying career.)

Hullo me little darlin's, and yes you know it's me, poor RH: love on easy credit with no interest to pay. When I was a boy crayfish were cheap, popular with drunks coming home from the pub. And how endearing they are, these sots, they make you smile. My daddy got on a tram and bought two tickets, putting a crayfish on the seat beside him. "There, you're paid for." he said. How cute, but what a pity he stumbled off and left it behind.
My daddy died of malnutrition, because he stopped eating and kept drinking. I try to think what use his life was, and there's nothing. How unfortunate. Or else I might be in Brunswick Street now, wailing the plight of aborigines, homosexuals, refugees, and women receiving a measely $900,000 damages from blokes who stare at their tits.
I'd be an atheist for sure, and make rude noises at bogans through my rolled up arts degree. Anyway I'm glad to see Ted is suing poodle dog Brumby: squeaky little toy, protector of breweries and pimp night club owners, worst Labor stooge since Piggy Kirner who brought in poker machines to fleece the lower orders. What a crook. Meanwhile she's had a posh avenue into a Williamstown Estate named after her where the houses cost one million apiece. Golly. There's Piggy Kirner Neighborhood House too, and other things; Piggy Kirner Westgate Bridge could be next. Why not, there's already Bolte Bridge, fine tribute to a possum head who hung a man then beat a drink driving charge himself when his blood sample mysteriously disappeared.
His billiard table is in Rosanna psychiatric centre. My biographical subject commented on it when I visited him there, shortly after his mother's death.
This is a man, my biographical subject, who twenty years ago had a grudge on society, now he loves it. He's a bloke who used to pinch cars, now he won't even travel on a tram without a ticket.
What's happened? No more aggression, no more firearms, hell, he won't even stand up for himself. What a turnaround, total personality change, all thanks to Clozaril and the Thomas Embling. The old him is gone, that's for sure, replaced by a doormat: a child-like thing, terrified of scolding. How's that.
But still, they can't make it complete, can't dispel the delusions, the belief that he is special, a son of God.
Well say what you like, they all come down on him: psychiatrists, the government, courts, social workers -the lot!- but can't totally remould him.
Darlings, there's a secret place, a room inside all of us no one will find.

Good heavens, reading through all that I'm astonished at the insights. Extraordinary. BANG! away I go. Well darlings I know my views are annoying, but they are innocent, if I ever get hung it won't be for making things up.

Hi folks. Big woman has found a boyfriend and gone to Bangkok.
RH here, with a license to kill.

Saturday night, Bingo City Altona, and as the old chatterers toddle out for a smoke they discover a ruckus going on in front of the reception rooms next door (same building). A young bloke covered in blood staggers about trying to get back into the place, other little drunks try to stop him. Turns out he's part of a "schoolie" gathering, which explains the thump-thump coming through the wall. Well there's lots of shrieking. Then as intrepid gossiper bingo grannies of fifteen nationalities look on another bloke staggers out the door and falls to the ground. Hell. It's time for comment. "Put 'em in the army," says an old coot with a huge gut. "That'll straighten them out." But a hefty woman on a walking frame with four wheels on it says, "Army? What good is that? Get them playing bingo!"
Well you shouldn't laugh but they did.
And verily, there's a lot of hijinks oldies would get up to if the motor still ran okay, fever should be at the end of your life not the beginning.

Dear Robbert, I can always rely on you to fill the gap between postings. I cannot tell you how much I hate this 'schoolies' bullshit. The oldie was right, get them playing bingo while pissed and take all their money.

Golly, back from Thailand already. The romance didn't last long. What happened, did mother go as well?