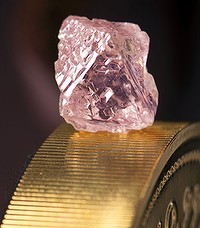 Lucky Rio Tinto, with all of W.A. to plough around in, it manages to find this 12.76 carat pink diamond. The largest of the rare and precious pink stones ever found in the resources-rich West.

Named the Argyle Pink Jubilee, the huge rough stone was found at Rio's pink diamond operations in the Kimberley region.


"This rare diamond is generating incredible excitement. A diamond of this calibre is unprecedented -- it has taken 26 years of Argyle production to unearth this stone and we may never see one like this again," said Josephine Johnson from Rio's Argyle Pink Diamonds division. 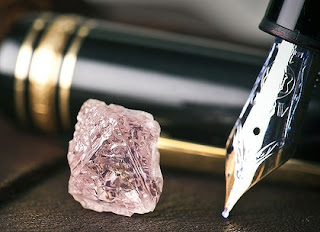 ﻿
Rio produces more than 90 percent of the world's pink diamonds from the Argyle mine, and said large stones like the Jubilee typically went to museums, were gifted to royalty or end up at prestigious auction houses like Christie's.

Christie's had only auctioned 18 polished pink diamonds larger than 10 carats in its 244-year history, Rio said.


When the Jubilee diamond has been cut and polished it will be graded by international experts and showcased globally before being sold by invitation-only tender later this year.


It would be nice if Gina R picked up the tab and presented it to Her Majesty.

I'm hoping they make a documentary of the cutting and polishing and that it turns out to be absolutely flawless.
Posted by JahTeh at 5:35 pm

I love your idea of Gina R picking up the tab but I understand that she is very, very careful with her money. As of course she has to be. Coff, coff.

EC, to be very uncouth, I've heard she's as tight as a fish's arse.
Ask her children, that poor daughter of hers, down to her last 60 grand.

In one of the papers in the last few days there was a comment from her son telling people not to bother kidnapping him and threatening to kill him for a ransom because she wouldn't pay up.

I find it odd that something as small as a pen nib can be called large, but in the world of diamonds it is a big one. I saw some jewellery in a city shop with pink diamonds in it, but I preferred the white and champagne diamonds in a ring next to the pink one. Gina R?

River, that would be megabucks Rhinehart.
Usually the rough diamonds are not as clean as this, some are quite frosty on the outside.

EC, she's her father's daughter. Ghastly old man who wanted WA to succede(sp?)from the rest of Australia because he didn't like paying taxes on his billions. He also wanted to nuke the coastline to make a large deep harbour for his iron ore ships so his billions grew faster.