Join me in the pain party 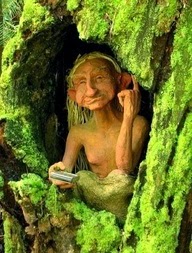 I found this and couldn't resist posting it. He hasn't been around much so I'm thinking that Rochester is holed up in a green tree somewhere composing more poetry or singing to the birds. He'd have to sing, there's no room in there for a piano.

I am in pain. It's taken me days to realize why I'm in pain and how stupid it is to do things when I'm old that I didn't even think about when I wasn't.  All those 40 degree days, surely they're over now, but to keep the house cool I would pull all the blinds right down, shut doors to rooms and generally it worked. But at night I would have to get the blind up in my room to open the window. And there is the problem, stupid ex with his heavy hand managed to destroy every spring in all the rollers blinds in the house. I did replace one or two until nobody knew what a roller blind was let alone the spring.
So I'm standing on tiptoe and rolling up the blinds by hand. Wasn't difficult a few years back but we didn't have too many unholy temperature days in a row and I was taller then. I've shrunk a few inches. Blind in the bedroom is 10 feet long in old money, lounge still has a spring and is 12 feet, hallway, no spring is 8 feet, kitchen, no spring 6 feet, second bedroom, no spring, 8 feet but I just shut that door. The study I fixed up ages ago by putting up drapes and cutting the roller blind to the roller and threading the lace curtain on to that which fitted inside the window.
I've stretched beyond limits, anything and everything that connects my shoulders to my neck and spine. Fortunately I didn't tear anything beyond repair. That would have been real pain so once I figured out the cause it was Panadol every four hours and lots of moaning, snivelling and sobbing.  All those great things one can do aloud when living alone. But I still couldn't work out why, once it calmed down, the pain would grab again. Bingo, don't let a cold fan blow across hurting things since they'll go into spasm and start pain rage all over again.  It's quiet now but I think I've possibly given my liver major damage since I always forget if the four hours since the last pills are actually up.

And to top it off the cat got mugged.  I didn't hear a cat fight or scream but then I had shovelled a couple or more of sleeping pills down. He was covered in filth, not sand when I brushed him down but sandy grease so I presume he hid under the car. I found that out when I was operating on him on my white doona cover but brave little lamb let me cut away the fur to see the damage. Well, something with a very big gob put two fangs into his shoulder and two directly opposite under his armpit ? legpit ? I think the chomp on the bone hurt more than anything else and the wounds are clean. He's had his calming water brushed into his fur and his calming drops in food and now he's grounded. He can go out in the morning but night time is barred, consequently after all my gentle treatment, he's not speaking to me.

Now a whine about hernextdoor and her concept of personal space. I rarely get inside her front door, usually I'm borrowing something from husband's realm in the garage and dressed in my household rags and looking like a bag lady. Still, this morning I'd been up, fed the beast, put the washing machine on which didn't go on, power outage so I went back to bed and warmed up the hurting back. I heard the front gate creak, which is why I don't oil it, cheap alarm system. I thought it probably was the BOH and some one did come in the back door, that's right in the back door through the lounge to the light switch, not put her hand round the open back door and try the outside light switch but through my house. She didn't want to disturb me, she says. If I had done that to her she would have had me on trespass charges.  Karma's a bitch, she has an all electric house and the electricity didn't come back on until midday and it had been off since 2 a.m.. I hope she was gasping for a cuppa and had a cold shower.
Posted by JahTeh at 3:54 pm

ugh, keep a good eye on those bite marks as they can abscess very quickly. Warm salt water on them twice a day, make sure they're healing and not getting infected. Poor puss.

Hiss and bloody spit.
And your neighbour obviously believes that if the world doesn't revolve around her it should.
I do hope the white beast doesn't abcess and that your pain subsides. Quickly.

She came right into your house???
Call the coppers! Well, next time, call the coppers. Or lock the door so she can't get in. Was she just testing the lights to see if everyone had no power? All she had to do was look around outside and see nothing but black at every house. Silly woman.
I hope IceBear recovers without any infection, I remember years ago bathing a wounded cat with cooled willowbark tea, got the biggest surprise of my life when he lay still and let me do it. Only once though, he wouldn't let me touch him again, but he recovered nicely and lived many more years. I believe his were more slashes from claws, not punctures from teeth. I don't know which is worse.
Keep up with the Panadol if you need to, just drink plenty of fluid (water, cups of tea) and your liver should be fine.
We have lovely cool days all this week here, so you should get the same soon.
I wish I could send you my ex to fix those blinds, he's a champion at that, he does it with a fork, which will then be bent forever out of shape.

Jah Teh, a young and vulnerable lass such as yourself should really keep your doors locked.

This electricity outage was extraordinary and not even mentioned on commercial tv news tonight.

Poor Puss indeed, Fenstar, I'd say the bites were inflicted on the run. He's all fuss and noise. Salt water is great but I also rely on Medipulv powder which is for humans but great on cats.

EC, no abcess front or back. I think his thick fur and fast legs might have saved him. Mind you he did get revenge last night for my not letting him out. The poop tray had a towering edifice that must have had him doing a handstand to finish. He refuses to bury in cat crystals so I get to pooper scoop it into the bin.

River, 40 years a neighbour and I'm still indifferent to her. She was brilliant at seeming to know all things but I realized early on that it was just a front. My house might have been the most untidy and full of kids and dogs but my mind was on the world.

Andrew, It was past 9 and I had been up to breakfast the beast which is when I opened the back door for him. Funnily enough the outage didn't extend to Farm Road so I didn't miss out on the Sunday coffee.

Excuse me, I haven't been in a tree since my Peeping Tom Days. Of course I consider myself retired now, but you never really stop, opportunities keep throwing themselves at you.

*Don't eat too much beforehand.

Well I won't mess about describing Robertson Macpherson's old digs but it's now owned by the state govt for the installation of those with funny ideas. It was the lovely Andrea's birthday last week so me and my biographical subject arrived there to call on her. And oh boy what a joint, stained glass and beautiful staircase. We found her little room and barged straight in. She was surprised of course, delighted but worried. "Men aren't allowed in the rooms," she said.

My biographical subject laughed but poor Andrea didn't get it. She did have a laugh later, well clear of the place.

Dear Rochester, I've seen a Mini Cooper S, you'll need two, one for each foot but you can steer me.