I'll have to wash the blog now. 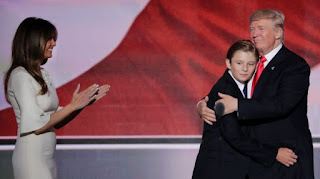 It's been rumoured that Melania Trump will not move into the White House but stay at home to look after Barron.  She wants him to remain at his exclusive expensive school where, presumably his exclusively rich friends will not stuff his head down the expensive toilets because they don't like Daddy President.

So while I am reading this tear jerking mother and son problem, my eye kept wandering over to the photograph of father and son.  It reminded me of some other photograph or couple or film and then the bell chimed and clanged my brain into reality.  Us Potterites still have not forgotten the 'fingernails down the blackboard' scene from Deathly Hallows Part two where Voldemorte tries to be human by hugging a horrified Draco.  Now look at the father and son photo again, it's there as plain as day.  Barron is as far apart as he can be while being held by two hands, he knows Voldemorte has returned.
Posted by JahTeh at 8:27 am

And now I have to wash my brain out.

once seen cannot be unseen :(
Well at least at school he'll be away from Daddy Dearest.

This family who will be leader of the free world. Know how the rest of us live.
Coffee is on

Darlings will go crazy to learn that RH's Christmas Message is imminent. How exciting! Of course there are poor sad sack bastards who get excited over nothing beyond planting their arses on a latte chair to talk shit for an hour. What sheep! Robots. "It's so funny when those bogans try to be like us."

Nothing changes, nothing will ever change, there'll always be the lower orders. Low wage bums with a cheap roof over their heads. And only their own class to look down on. I'm from the slums, the dirty slums, foster raised by dumbarse alcoholics. My luck is no de facto managed to kill me. From age twelve I had four probation officers, one after another.

1. An old lady with nice furniture but nothing to do who wanted someone for afternoon tea.

2. A young dolly, good looking, distracted by the exciting male tendency to chase a root.

3. A homosexual who asked me if I played with my dick.

4. A sad old man who wrote me a letter ending with "Kind regards".

Nothing has changed, there's no help for the poor, the poor little children.

What can I say? Odd things happen: Donald is president.

-Robert.
Merry Christmas, big woman, am sending you a card.

"stay at home to look after Barron" - watch the cook feed him and the housekeeper do his laundry? poor kid though. x x

Money speaks all languages, lawyers know them all.

Darlings the RH Temple of Extreme Thought is sold. $999,000. I'm astonished. The bloke who did the photos for realestate.com is a magician. He could make a feminist look good. "Move that clutter," he said, "too much happening there." He got me working. The clutter shifted from one end of the house to the other, finally I just crammed things into cupboards. Later it took me a week to find my little radio.

The place has sold weeks before auction day.

$999,000, is this true? I can't believe it. But yes, it's true. Well darlings as a boy I walked from Burnley to the boot factory in Collingwood, just to save the tram fare. Picking up butts on the way. Now I can blast through it in an E-Type. So how is this? What's happened? I've done nothing. Dirty old Newport has skyrocketed in value, that's all. I paid $51,000 for this dump thirty years ago, now I'm being handed near a million. Good heavens. I'm ashamed.

It's the latte set, two couples, they fought like mad, upping each other on the phone. It reached $930. In the end they had to bowl along to the agency. The agency lady had big melons, when she told me the final amount I thought she was joking. Darlings I've never understood money, the chase to acquire it for its own sake. In these last few weeks with estate agents I've found out what's going on. While everyday life on the surface is bland, underneath it's ferocious. You have to understand that to understand anything about this society. One week before my sixteenth birthday the boot factory manager sacked me to avoid paying me an extra ten bob a week. And so I lost my room, my bed, and became a vagrant. And was jailed for it. No one can touch me now: police, shopkeeper magistrates, dirty maggot bosses. And I've done nothing darlings, just kept a roof over my head. I'm innocent, everything explained in hard cash.

I've got a house in the country, solid brick, $169,000. My thoughts are gigantic extreme. I walk the main street, past dead shop windows, no business has succeeded here in fifty years. Yet some show merchandise, just for a joke, all covered in dust. There's a train station here, but no one gets off. It's all freight, passing through.
My house is on a rise, all else is flat, I feel quite lordly. And I am. My house is all alone, just how I like it, no cabbage heads nearby. The population I'm told is 975, I've only seen three of them.
There's a camping ground at the river, visiting latte set pedal about, come into town on their bikes, touched and thrilled by the crumbling decay, a graveyard of unrentable shops.
It's dry here, farmed out, I research its history, a boom town one hundred years ago, streets crowded, shops thriving, gala events at the Masonic hall, everything all lit up you bet, farewell speeches, cheers, for boys going off to the first world war and never coming back. The Masonic hall, all quiet now, and smaller than you'd imagine.
My estate agent, the one with big tits, was curious about this move of mine, "What will you do there?" she said. I struggled to think of something, "I'll write my memoirs," I said, then laughed, to pass it as a joke. She doesn't really care, and it doesn't matter, RH is RH anywhere.

R.H. - nearly a million smackers? will you marry me?
actually I can top your town, as mine with all the same historic attributes, has no 'main street' and only one business - the pub is for sale and I need to buy it but am 150k short until my house sells. You will have an earnings problem unless you stash some cash where it earns you nothing until after June 30. I can help you with that.

The Austn Bureau of Statistics says the popn here is 300-odd. I too, thought I would write and create once I got here but it has been totally hectic and there is no downtime at all. Tiny communities are different. Clean air, no litter, no vandalism or grafitti, and at times, when the convoys of logging trucks stop passing each other at the crossroads and the birds shut up, total divine silence. Welcome to the country.

Pardon me, I'd have to ask my mother's permission to marry and that's no longer possible. As for buying the pub, my son in law (an Arab Walter Mitty) had a deal for me immediately he heard the news. If I happen to cark it soon and he gets hold of the dough it won't last long. That's my big worry.
The house I've bought here is a much better house than the one I sold in Newport. It cost a fraction of the price and at 1400 square metres has three times the land. And there's a cellar in which I plan to imprison Miss Jahteh.
The locals are old men with white beards and lots to say, but there are even a few young latte set. (The latte set are like fleas on a dog, you never really get rid of them.) There's even a little latte temple here for them to worship in, but I hear it's closing soon. Businesses here open and close regulary, and you can buy a good empty shop for around $65,000. I actually thought of doing it to put bizarre things in the window (mannequins without heads, ect). The locals generally are very welcoming, delighted to have a new compatriot in their fight against the world. They're defensive of the town, as it gradually slips into oblivion; bankruptsy occured years ago.
I'm joining their Historical Society, just for something to do, and because I love history anyway. My slight worry is they'll soon find out I'm a weirdo, but that should be okay, it's common here already. More later.

You learn a new thing every day, you can't avoid it. I'm told an early resident of my little estate here owned the local cordial factory. Cordial was a popular drink in the late nineteenth century, lasting well into the twentieth. I even remember it in the 1960s when I worked in a shop for playboy Mr Hall who went bankrupt and laughed like mad about it. We all drank cordial there. The old cordial factory here is peeling away like everything else. the idea is to just let the weather demolish it all. Last Saturday to flaunt my city sophistication and get a "Howdy stranger" I entered the local pub. I'd been hoping for a good looking widow but was immediately surrounded by three sets of white whiskers. "Howdy," they said.
Strangely, I felt a responsibility, an obligation to be bright for these poor souls on their sinking ship. They wanted to know all about me. I told them a pack of lies, much appreciated. It went on for two hours. Then after several tries I finally got away. (They probably think I'm a queer, which isn't a bad thing, people laugh rather than hit you.) My car was parked nose to the veranda. I took a while to start it because - Good heavens! - alone on a bench under brilliant light was a woman about thirty displaying half her tits. She must have seen me pass, but showed no notice. Well darlings country towns are dark at night, this one darker than most, such an extraordinary vision made the entire joint look worse. It might even explain what happened to it.

Had I been nicely brought up with toys at Christmas I might never have stolen so much stuff. I might even have been honest - rigidly honest, like my social worker niece who'll only rip off the government. Really, everyone's a crook.

Good Heavens, go away to have a small breakdown and I miss all the news.
Robbert, I demand that you write those memoirs, it's a history that should not be lost. My relo's worked in the boot factories in Collingwood. And when Miss O'Dyne stops running round like a headless chook she will help me with my family tree. One side is descended from a family of bootlickers who hacked the Irish so well, Cromwell gave them a castle.

That last comment, I know that feeling except with me it was books, toys just sat but books took you on journeys and my house is full of them, my friends.

Sorry to take so long to say hello to you Miss Dora and warn you to stay away from RH, Nouveau Riche and bad to the bone.

Photo of gorgeous fairy like granddaughter will be up soon.

A breakdown, how interesting; stretch it out big thing, a breakdown's as good as a holiday.