The Three Gorges Dam in China is already threatening fisheries in the East China Sea. The Dam on the the Yangtze River is the largest in the world and was partially filled for the first time in June, 2003. Within two months, a drop in the amount of fresh water and sediment reaching the sea caused a massive decline in the phytoplankton that forms the base of the food chain. Every creature that eats plankton is food for something else. Phyto plankton need fresh water in the summer flood season but that's when farmers need the most water for irrigation and while the Chinese government has promised not to decrease the total annual flow, the water may not be released at the right time.

By August, 2003, the High Productivity Zone at the mouth of the Yangtze had shrunk by about 86 per cent. The sediment load had decreased by about 55 per cent since before the reservoir was filled. The ratio of silicates to nitrates also dropped and caused a shift from a healthy eco system of silicaceous diatoms 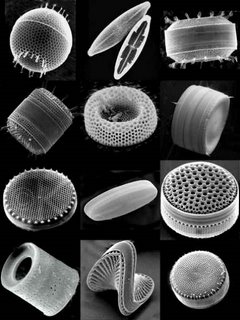 to flagellates which can kill fish by depleting oxygen in the water or secreting toxins. The annual catch of fish could be reduced by one million tonnes. The problem is going to increase with the building of half a dozen more dams.

In India water is also a problem with the depletion of the underground aquifers. More water is being pumped out faster than it can be replaced.
In Northern Gujarat, fifty years ago, the wells went down 10 metres now the wells have to be sunk to 400 metres. One of the problems in India is retaining the huge amounts of water that come with the monsoon rains.

In Gujarat, in the village of Rajasmadhiya, they have redesigned the drainage system to slow the monsoon run-off and collect it in specially dug ponds. The water passes from one pond to the next in a slow cascade then percolates through the soil to refill underground reserves and wells.
This is an old tradition where shallow mud-walled reservoirs in valley bottoms captured the monsoon rains. The Indians called them tanka, a word that's passed into English as tank.

Rainwater harvesting is now a movement across India, not only in the countryside but the cities. It is a communal effort, it can't be done by one person but dry countries across the world are experimenting with similar schemes.

We have to start looking at water conservation now in this country. When one cotton T-shirt requires 7000 litres of water and one quarter-pounder hamburger requires 11,000 litres of water to be produced then the water planet is doing down the drain.
Looking backwards as well as forward isn't a bad idea.
Posted by JahTeh at 7:04 am

everyone's thats got two dollars to rub together is worried, has been lately told they should be worried, about running out of oil. More deaths from starvation due to drought will occur than from not being able to drive the family car to the grocery store or the mall.

The world congresses on water rights and the UN commissions on it are completely unknown in US media. we had huge drought problems recently and worse are looming. and whats our solution? more lobbying!

It's only recently in the suburbs of Melbourne that we've been allowed to install water tanks. I really despise anyone who puts a green lawn above drinking water.
We have had dual-flush toilet systems for quite a while and new houses can't be built without them.
Every little bit helps but it's no good without rain.

I know there are many different brands but my experience, so far, with dual-flush toilets is that they are called that because they have to be flushed twice.

You have to watch the toilet rolls. Nothing more than 2 ply paper, forget the cottonelle softness.