Full moon's on the way. 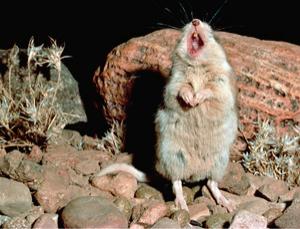 Cute isn't it?
It's called the southern grasshopper mouse. It lives in the badlands of south-western U.S. and Mexico.
It's carnivorous, fresh meat on the menu from crickets, rodents, tarantulas to scorpions and other grasshopper mice if food is a bit scarce.
And after a feast there's nothing better than throwing back one's head and howling at the moon.
Standing there like that, with open mouth, I could almost imagine it on X Factor.
I'd watch that especially after it finished with the judges.
Posted by JahTeh at 10:46 am 6 comments:

Of blog posts past

Yes, I'm still here, just melted to the chair.  The cat is fine, busy poking more holes in the curtains. As my Dad would have said, "nice cat but dumb". There is a huge gap between two lengths of curtain but do you think he can ever find it, just easier to put his head into a new shredded hole.

Now I was going through some old files and realized I had never followed up on this post. 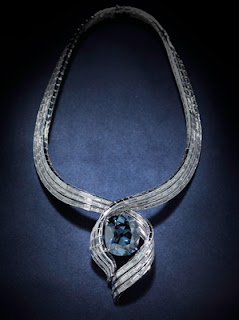 And we have a winner although the Hope Diamond is now back in its original setting.  I picked this one as my favourite setting which was the second design by Maurice Galli and called "Embracing Hope". 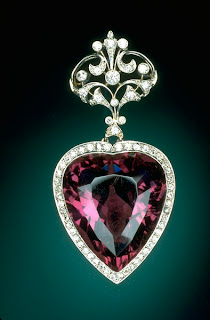 While I was wandering through the Smithsonian looking for the Hope, I found this huge amethyst and diamond pendant.  I'm particularly fond of heart shaped gems and I wouldn't mind adding this to my jewell box. 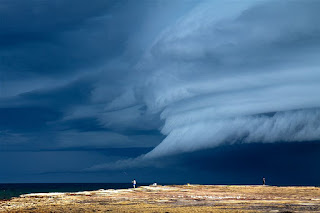 The outright winner was this image by Karin Rich.  Taken at Coledale, N.S.W. as a summer storm closes in.  I love watching storms but we've had a few too many in the last 4 months. Still it's a ripper of a photograph. 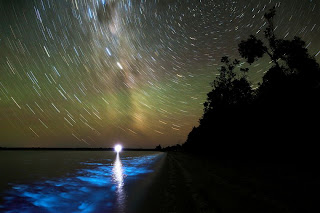 Another image I really loved was this one taken by Phil Hart in Victoria.  Lake Victoria under startrails and with the added element of bioluminescence from Noticluca Scintillans.  I blogged about them somewhere here as Sea Sparkles.
Posted by JahTeh at 2:46 pm 4 comments:

The sky is almost falling. 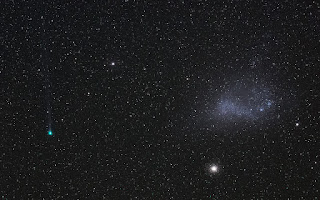 That green spot is Comet Lemmon and for more information on the other comet appearing now gohere.  Sky and Telescope also have a great report on the meteorite strike in Russia.  They have sky maps to show where the comet will be and how best to observe it.
Posted by JahTeh at 12:32 pm 4 comments: 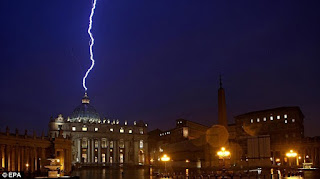 20/2012 and the end of the World according to the Mayan calendar.  It didn't happen but look at the start of 2013.
The Pope resigns and lightning strikes St. Peter's Basilica during a massive storm. Conspiracy theorists come out of the woodwork and say it's photoshopped or was taken on some other stormy day.  It didn't hit the dome but the lightning rod beside the Cross. 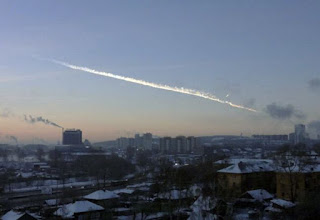 A meteor shower hits Russia and this time thanks to iphones and digital cameras, it's all captured for us to see.  We have a couple of meteor showers a year thanks to the debris left by comets as they've passed by but this was unexpected since we were all looking in the direction of this big beast.
The asteroid known as 2012DA14 measuring 150 feet across with a mass of 130,000 metric tonnes.  It skimmed the geostationary orbit of Earth's satellites at 17,450 miles per hour but had nothing to do with the meteor shower since that was going in the opposite direction. So the boffins tell us and we do believe them just like we believe dodgy calendars carved in stone.

Kim Jong Un the Twit of North Korea allows his fellow citizens/slaves/peasants/prisoners to starve to death so he can have a death weapon of his own.  You could say he is the Pestilence of the Four Horsemen of the Appocalypse.

Did I mention there is a huge comet coming at us, so big and bright we'll be able to see it in daylight?  Gadzooks, what a year this is going to be.

And I'm scarffing one down as I type.  One does need a drop of sweetness in life and all I had for dinner was pancakes, maple syrup and ice-cream, 2 gin and tonics and a cappuccino.  But for all that I can still imagine myself in one of Marchesa's new fall collection gowns.  I'm rather partial to the red but love the swing of the beaded chiffon although I do have a lot more to hold it up in front than the stick insect currently wearing it.  Perhaps a tiny string of beads over the left shoulder just to make sure I don't turn suddenly and swing someone's eye out.
Apparently the collection is headed for the awards season in Hollywood and please don't let me see a Kardashian in one of my favourites.  I would have to stab myself in the eye if that happened.
Posted by JahTeh at 9:08 pm 6 comments: 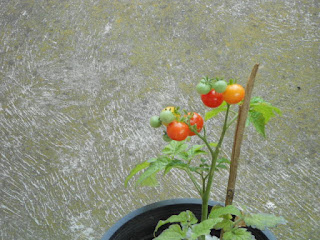 My cherry tomatoes, my triumph over my black thumb in all matters plantlike.  They never made it to the kitchen, I'd just walk past and eat the ripe ones on my way to the back door. I've now picked 10, an all time record. 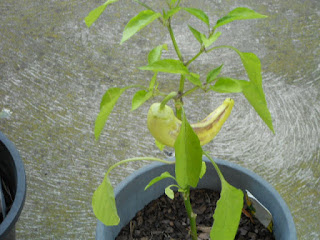 My one and only banana chilli. I stir fried it with tofu and Thai seasoning and it doesn't look like I'm going to get another one on the bush.  Probably because it's supposed to be in the ground not in a pot. A bit like the rest of the tomatoes which should be in the ground and are looking pretty grotty which is why you're not seeing a photo of them. 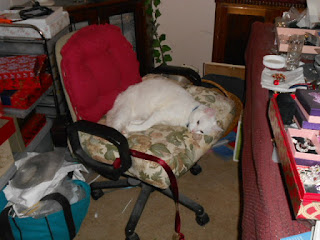 And my little (?) IceBear.  Comfortable on the feather cushion like every other cat I've owned. Perhaps I should have rescued the other feather cushion at the time then I might have a chance to sit on one.  He was still a bit shy of the camera but not of exploring the house.  Nothing like picking up numerous diamonds off the floor because he decided to walk across the table in front of him. The tapestry protecting my table is anchored by a tonne of jewellery making things and it hangs down another 2 feet or so on the other side.  Genius discovered that if he grabbed it with front and backs paws he could swing backwards and forwards, a great game. 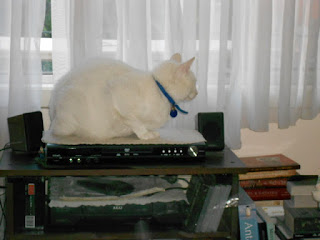 My shredded curtains courtesy of Lucy and now himself.  I do have lovely new ones but the shreddeds have been there since 2010 so I can wait until the explorer has finished exploring. The TV is beside the DVD player and it's at least a metre  higher so I thought he'd never get up there.
Never underestimate a determined cat and never underestimate the dumbass who finds getting up is a lot easier than getting down. 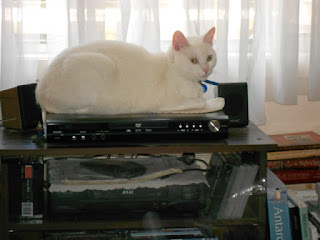 At last, a head shot without hysteria.  I've finally combed all the terrible fur knots out of his back so he's much more comfortable.  Any time a cat can't groom himself I automatically look for an injury and since the knots were only in one spot, I assume he's had a wallop on the spine that's stopped him from moving without pain.  I'm not spoiling him but I did find a nice diamond collar that should suit his colouring. Next up is getting to read the tag and changing the address to mine which the council charge for.  And since all animals have to be registered in April, I get that as well.  He's only been here a week and I heard a purr from him last night.  I told you we'd bond over a can opener.
Posted by JahTeh at 11:54 am 13 comments:

That holiday I used to dream of. 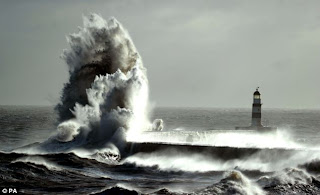 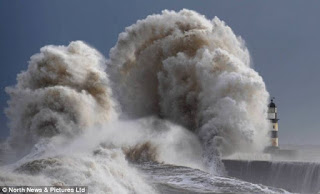 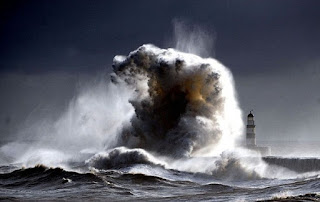 The holiday in a light house far away from the madding crowd.  No people just me looking out over a sunlit sea.  Well I might have gone off that idea a bit after looking at this light house in Durham County during a walloping storm last week.
The view from inside would have been fantastic and "wet yer knickers" terrifying.
Still bolstered with enough Bombay Sapphire, chocolates and tranquilizers I may have enjoyed it.

Board of Directors of the nursing home are still assessing reports and notes.
Cowardy custard me has avoided head of staff by going down when the office is shut.
The cat is doing fine.  Do you know there was more discussion about the beast coming to live with me than discussion about the 6 days of hell my mother suffered in hospital.
It's the 10th today, Chinese New Year but I'm still wading through the molasses that is 2013 so far. I've already had one breakdown and I don't usually get that bad until July. And I haven't even told you about my adventures in Myki land.
Posted by JahTeh at 1:43 pm 6 comments:

1.  I have moved furniture, in fact, nearly the whole house.  Everything is back in place where it was 2 years ago including the dust. Now the finesse of cleaning comes in, skirting boards, light switches, door and lights and carpet.

2.  I have a cat.  His name at the Home was Mr Jinx, his name here is IceBear and he will get to like it or else.  The Kingdom of the Ice Bears is from the Golden Compass and believe me this cat is the size and lumbering mass of a polar bear.  I can't put up a photo as he is still living under my chair but he is eating, drinking and pooping.  He and I are supposed to have flower essence drops during out patting sessions, this is for calming purposes to get him used to me and bond with me.  Yeah, that's working out really well. By the time I corner him somewhere, grab him with one hand, grab the flower essence with the other we are both hissing and spitting at each other.  Mind you, when I do get some on him, he does calm down and it's been great for my feet.

3.  I have spoken to a Board Member of the nursing home and written a letter which, to my horror had to be addressed to him via the Home. I was hoping to remain anonymous because if I'm cornered then I'm coming out fighting and taking no prisoners. He was an easy man to speak with as his wife was a resident at one time and took the time to listen to what I had to say.
I mean what do you call a complaint which isn't really a complaint.  Anyway the letter was easy to write by sticking to facts but also calling some points hearsay because I wasn't a witness.
As Harry Truman said, "The buck stops here!" and procedure was followed up to a point and no further.  If her doctor had been called on the Friday then she would have been treated with antibiotics at the Home and not spent a week of Hell in hospital.  And it was Hell, I was there.

4.  I have had my breakdown. Two days of shaking, temperature and nightmares followed by two days of picking up the pieces. How much do I love tranquilizers, lots.  I would have supplemented them with the cat's calming drops if I'd had the beast then.

5.  I have eaten 6 tomatoes and one chilli from my plants.  This qualifies as a world record for my black thumb.

6.  I have recognized that it is now February and have changed the calendar, only 5 days late.

7.  Blogging will resume before March.  Mother turns 83 in March.  She's aiming to be well enough to go out for lunch.  If I could just bottle that woman's will power, I'd be disgustingly wealthy.
Posted by JahTeh at 6:39 pm 8 comments: