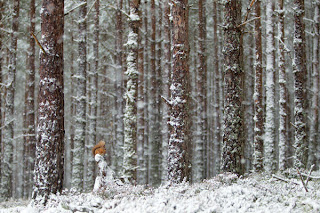 Another great website with blog and photos belongs to photographer Peter Cairns.
I came across one of his photos of a red squirrel in New Scientist and I was trying to find it to post for your delight and it is delightful but you'll have to click to get the best view. The Red squirrel below belongs to another photographer who's name escaped me. 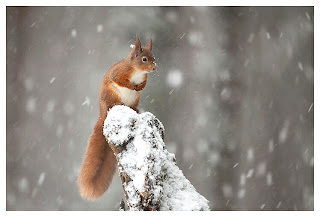 There's always some idiot that thinks it's a good idea to import an animal, in this case, the American gray squirrel which has only taken a 100 years or so to nearly see off the native English red squirrel.  The poor little reds only survive in Scotland and in a few protected areas in England.  And the grey yankie rodents also carry the squirrel pox virus which they are immune to but the pretty reds are not.

This is the place to spend an hour or two. Go to images and open the box for 2020Vision which is a nature photography project that aims to highlight the state of ecosystems all animals need for survival.  Then wander around all the fabulous places Peter Cairns has photographed. My stars said I need to meditate in nature to regain some balance and here I can do it all from a comfy chair. I'm not that fond of snow so my thanks to a great photographer who did all the freezing for me.
Posted by JahTeh at 2:56 pm 10 comments:

I blame comets, solar flares and the full moon. 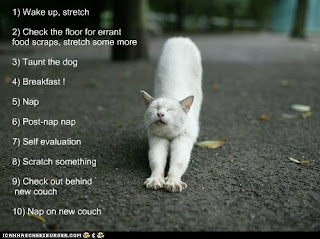 Accordingly to Link astrologer to blogsters and good at it, the full moon is especially moony this week.  I think she's right, I would dearly love to slap my sister, again. I believe this is the 50th time I've wished this and haven't done it yet.  And I found out that the blood clot went from mother's heart into her lung/s and is now goddess know where but she lives.
That image up there could be the exact double of the IceBear.  He certainly does everything on that list and the scratch something is usually the chair he's sitting in and if we had a dog he would taunt it. He's now discovered that sitting on me in bed makes a good post for bird watching in the mornings.  And speaking of bird watching, I have a bird I need identifying but everytime I take the camera to the Home, the bird doesn't appear.
The only image exactly like him I've found on line is from South America.  He is blue on top, no other markings, a paler blue underneath, red eyes and a red/orange beak. He's taken up residence on the bird bell near Ma's window and chases off the lorrikeets.  He's slightly bigger than them so, no, not a budgie.  He's used to people or he's so hungry he's not leaving the bird bell and I think he might have escaped from somewhere.
Hopefully I'll have a photo op sometime over Easter and post them here.
Posted by JahTeh at 10:00 pm 7 comments:

Still with the comet.

Our favourite cold island over a magma hotspot, wonderful Iceland.
If you look closely you'll see the Gullfoss waterfalls, a brilliant aurora due to a Coronal Mass Ejection and M1-class solar flare.
If you look really close, you'll find Comet PANSTARRS as a tiny light just above the horizon toward the left of the photograph.

This was taken by Stephane Vetter  who has a fantastic website of his images at http://www.nuitsacrees.fr and they are just magic. Don't visit if you're in a hurry though, it takes time to enjoy the beauty.
Posted by JahTeh at 7:19 pm 3 comments: 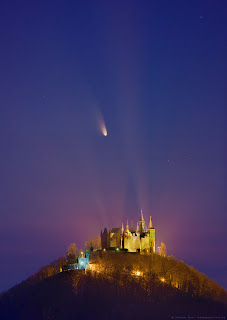 This is Castle Hohenzollern about 80 kilometres away from Stuttgart, Germany.
And above it is Comet PanSTARRS (C/2011L4) sweeping away from the sun and trailing the broad dust tail that's become familiar to comet watchers. I've seen other photos but I think this is the best yet.
The image was taken on March 15 with an extreme telephoto lens.
The next Comet to appear is said to be so bright that we will be able to see it in daylight and is heading for us late 2013.

Will be back soon.  The usual problems, panic attacks, mother in hospital, mother out of hospital and in good spirits, me in meltdown.
Posted by JahTeh at 6:55 pm 6 comments:

I should have posted a waterfall. 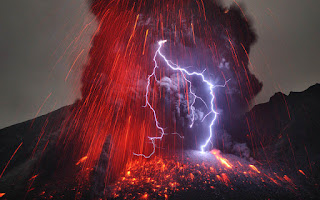 This is Sakurajima volcano in southern Japan photographed by Martin Reitze early this year.What's interesting about this volcano are the lightning bolts near the volcano's summit.Scientists are still working out the cause of volcanic lightning from catapulting magma bubbles being electrically charged or charge inducing collisions in volcanic dust. Considering they haven't really worked out why lightning occurs in ordinary thunderstorms, it could be a while.And for those who love lightning, it is usually occurring somewhere on Earth, typically over 40 times each second.

No, I wouldn't consider this, ever. 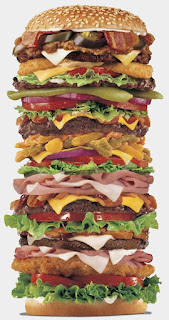 So, I'm catching up on my reading.  It's March and I'm just finishing New Scientist for January 12 and I came across this article which I consider to be truly moronic.  It's bad enough the obesity and fat bashing us largies cop every day in the news and this doesn't help the notion that fat people are idiots deliberately eating themselves to death.

You know my views about gastric bypass surgery by now, I hate it.  Well now let's look at this system built by Aspire Bariatrics of Philadelphia, Pennsylvania.  The idea is to let overweight people eat and drink as much as they like and still lose weight.  Aspire Bariatrics will surgically install a valve into a patient's stomach and through their abdominal wall.  This allows the patient to  pump out some of their food 20 minutes after they eat.

This system is now in clinical trials and has helped people lose an average of 20 kilograms in a year and some nearly twice that.  I assume the cost also covers the bucket to hold the pumped out whatever.  It's not a new idea, the Romans thought of it but they didn't have the pump, just two fingers down the throat and a slave to hold the upchuck dish.

This company will make a truckload of money, damn them.

Shut up, it's only been five days. 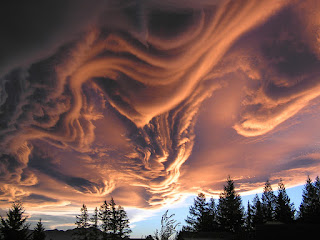 Asperatus clouds, brilliant. The colour of my hair and the turbulance of my convoluted brain.
I'm sure inside my head looks like this. I can see my brain banging itself around my cranium what with the panic attacks, the agoraphobia and the cut backs of my usual coping mechanisms. I haven't been to the pokies for weeks, I haven't bought anything on ebay, my chocolate stash is empty, no ice-cream in the freezer and the cat food doesn't look appetizing.
I have a party to go to tomorrow, the weather looks great, I have the hat (Mad hatters tea party) but I can't bring myself to get a taxi and head out.  I've pushed myself too hard this last month and I'm paying for it now.

The Home is still unsure whether I'm going to sue it for negligence.  The Councillor hasn't replied to my request for 'Stop signs' outside the Home so it looks like another Don Quixote charge on my part. New rules at the Home involve no loud noise, no raucus laughter, no hugging of residents, no pet names for residents, no more than two carers in the room with a resident, no carers to sit down with residents in the activities room.  It's my mother's home, you fuckers, not a Gulag.  Everyone who had anything to do with helping the old girl during the recent crisis seems to have been deprived of working hours or put on the graveyard shift or has had spies watching for any infraction of rules.  Nurse, who I credit for saving the OG, now has had his sexuality whispered about.  Even someone who I thought would have known better has said that after all he was in charge but not until the infection had been reported twice and ignored and he is only part time not full time.  And sexuality has nothing to do with his ability, it's just snarking for the hell of it.

I left there yesterday looking like a raging Asperatus but mother's getting better and will make her 83rd birthday next Wednesday.  She doesn't want a fuss so on Thursday we're going to walk to the park next to the council chambers and have a picnic with her carers who have that day off and the one who wheels the chair and we will be raucus, we'll laugh, we'll sit together and we'll insult everyone we can think of.  As luck would have it, the bottle shop is just across the street, bring on the Black Ice. Lemonade for the OG. We can't have her going back and being loud.