And we start the year with a bang 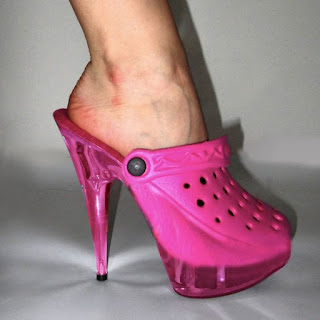 I decided not to talk about the year, I have a feeling it's only going to get worse. I was looking for a pair of boots I'd archived which I loved, no not those up there but the brown leather ones at the bottom. They're called slim calf boots for ladies with skinny legs and I think they look great. They remind me of the first time I saw boots on legs when they were just coming into fashion and I never saw another pair I loved as much. I also realized that I didn't have and never would have skinny legs so they remain on my never to wear list.

Now about Crocs, I hate crocs. They're not meant to be worn with any confidence and especially when made by men with a sense of humour. High heel pink crocs, insane but you'll get noticed. 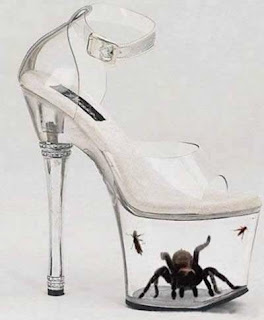 Now if you really want to be noticed, why not these? Spiders, dead I presume and safely encased in plastic but even the thought of walking on top of one gives me the horrors. Give a pair of these to your favourite arachnophobe for her birthday. Trains are too crowded these day to sit and cross your legs to swing your shoes in front of fellow passengers, all of whom are wondering if it's real or not. 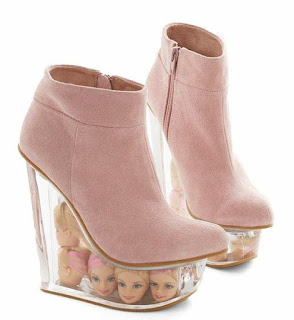 These are for us who were never given a Barbie for Christmas and hated every friend who had a roomful. Not me, I only wanted books not blondie dolls with skinny legs. For giving to all your friends you suspect are secret sadists but I'm all for equal rights so where are the booties full of Ken dolls, heads I mean. Although anatomically correct Kens would make fine stomping soles. These were made by a man and I really have to wonder about his mental health. 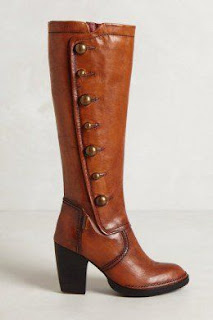 But my all time favourite, lovely heel, gorgeous buttons, great leg fit, yeah, yeah, except for fat legs but I can still dream. I've put them in my dream folder of all things I've ever wanted and will never have except in that little corner of my mind where I am 6 foot tall, fabulous figure that stays that way without exercise and long red hair plus flawless skin with not a wrinkle in sight.  It really is a dream folder not the walking nightmare I am in real life. I really love those boots.
Posted by JahTeh at 3:09 pm 7 comments:

Not even a fortnight into 2021 and I'm ready to build a bunker in the back yard, mostly for the cat. We have had fireworks but I forgot the Day for Dickheads when we waste money Australia hasn't got.

The cat's been having a bad time. Nearly killed himself yesterday by crawling into a king size doona cover, not being able to find his way out, panic. I could hear a tiny meow of fear, looked everywhere and wondered if he had gone out in the heat and was stressed. Then I saw the cover move. I could not find the open end, because he had rolled the damn thing into a ball and it was a matter of trying to straighten it flat with the lump still not helping. By the time he staggered out he was distressed and drank nearly a bowl of water.

It didn't help that I accidentally stood on his tail later on.

I will be glad when the 20th is over and maybe Biden can get on with the job of making America human again. And why are Australians in the Liberal Party going on about how great the Mad Mango still is. They haven't done a thing for poor people in this country. Scummo is on holidays again so he hasn't pulled his party into line. What a surprise!

Dan Andrews cut his holidays short, Albanese, one car crash, couple of days in hospital and he's back on the job.

Boris seems intent on killing most of Britain without having a war. I have a wonderful vision of Queen Liz complete with ceremonial (just sharpened) sword standing at the door of 10 Downing st. and politely asking Boris to step outside.

And another thing, why are the mosquitos the size of 747s this year? Covid is enough without Dengue fever wanting a spot in the limelight.

Scummo is off on holidays again because he had to come back and work on changing one word in our crappy National Anthem.

My sister cancelled her flight from Queensland thanks to ladies who lunch and spread virus in Melbourne. I'm glad she's not putting herself in danger which means I'm likely to kill her if she starts sistering me. Those of you who have sisters will understand that.

I'm still trying to calm down the cat from fireworks last night. They were cancelled in Melbourne but not at the local Park. He's been a perfect drama queen because of the full moon and slept on me, 40kgs of cat gives one nightmares and now it's fireworks.

And a big Christmas carol for Robbert who outdid himself in the Daffy Duck Tie present. Brilliant, looks fantastic hanging up with the other 5, yes I counted 5 and now 6. Sorry so long to thank you but I've been trying to take a photo of the cat wearing it.

He looks so Daffy in it.

Now I'm going to have a lo-carb beer while tea is microwaving itself.