NOTHING TO DO WITH IT 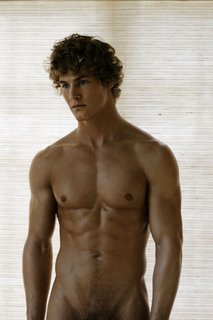 Nope, he's got nothing to do with this post whatsoever. He's purely there to be looked at and appreciated for his statue like beauty, aesthetic qualities and phwooor, wow, yum, drool.

We're still cleaning, it goes on forever. Who invented clean? My new toy is brilliant if a bit unwieldy. All the little bits that go on the end of the dustbuster work and my window sills are almost dead insect free. Not the Bogong moths though. They have to be picked up with a front end loader. Is it just me, or are they earlier than usual and bigger than ever? A B52 doesn't have a wing span that big. I just washed the curtains and the bodies are piling up in the folds as I type. The cat loves them. The joy of being woken up by paws crushing my face as he tries to climb the bed head to catch them in the moonlight.

I'm overlooking the US elections because the coalition of the dills is still in place.

The Federal Government has finally twigged that if you give mothers a baby bonus of $4100 then they're going to spend it. So to stop these ruthless consumers, the bonus will be paid in 13 instalments, but only to mothers under 18. These teenage mothers are supposed to have blown the money on plasma TVs, overseas trips and partying. In this article there's no mention of what they did with the baby while watching the tv, overseas tripping and partying. Mal Brough said they'll maintain the lump-sum payment for adults because most dealt with the payments responsibly. Wrong, since when did turning 19 suddenly make an irresponsible 18 year old gain maturity. Give it to all in a lump sum or instalments.

I've given up my shopping day posts. I hate Safeway and Coles. Coles not so much because they at least have a cafe for a coffee and cake, Safeway wouldn't care if I dropped to the ground in exhaustion. I hate the top shelf in any supermarket because half of what I buy is up there, way at the back, way way at the back. Don't they have minions to re-stock shelves? My one ray of sunshine was finding the Menindee grapes are in. I wasn't greedy, just a small bunch and was I glad it was small. When did grapes sell for $14.95 a kilogram? I could have bought 4 bottles of cheap booze for that. I couldn't put them back, I'd handled them which made me think that maybe someone else had so they've been washed several times. On my list of all time greatest inventions, individual steam fresh vegetable bags. No more dead and dying vegetables in my crummy fridge and I don't have to peel anything except the top off the bag.

I'm glad someone else has postponed the being overcome with joy at the US midterms until we see whether anything actually changes.

"So to stop these ruthless consumers, the bonus will be paid in 13 instalments, but only to mothers under 18. "

Odd how the Brough and his colleagues are the first to jump up and down when it suits them to denounce any moves towards a nanny state.

Tossers! Dwarf tossers at that!

Lucy, you've taken the "more things change, the more they stay the same" words right out of me mouth.

... and I do think it is bad form fo you to have posted that pic.

I was under the impression when I posed for it, it was for your personal private viewing only.

I'm not a sex object, I'm a human being!

My new toy is brilliant if a bit unwieldy.

For an odd moment I thought you were talking about the toy-boy in the picture.

Lucy, the only thing to be pleased about with these elections was that people were bothered enough to turn out and vote.

Damn it Sedg, I suppose you'll be wanting the royalties now.

Duckie, handling that much man would be more than unwieldly more like impossible at my advanced age. (I heard that Sedgwick)

So your shell-likes can hear through me lead lined sarcophagus!

Bugger, I'm a gonna have to brush up on me sotto voce.

BTW we don't want no freekin' royalties. Have have me fill of them ... Princess Margaret de Mustique, Anne of Horses, the toe-licked freckled Fergie, right down to the Princess of Hearts an' let me tell y'all, they're not all they're cracked up to be. We felt so cheap.

You do have good taste in men. Was the pic cropped?

I know what you're thinking Sedg before you do, it's a gift given to married women the minute the ring hits our finger.

Not cropped by me Andrew, tantalizing is it not?

Why can't stop thining about Germain Greer when young guys strut around like that?

You'll give us guys dysmorphia or something looking at images like that! Men be proud of your back hair!

He'd be better without the dopey head.

Bruce I saw that program with Germaine and I agree it's very nice to look as long as you don't touch and I have to admit I'm not a big fan of fur unless it comes attached to a beautiful personality.

Link, your opinion is tainted, you've been around sheep too long.

King Bruce wants to be a professor, but can't spell. How unfortunate. Yes, and he can't think, but that's an advantage. Well I'll tell you what Broose, I've been banned by bloggers who have some intelligence; you have none. So being banned by you doesn't bother me at all. Truly. I consider it a compliment.

Banned by Bruce, RH, when did this happen? I was only there yesterday. You've been shooting at Wally again haven't you? Good lad.

Welcome back from the country.

I don't know how many crackpots Wally has been able to assemble, but there'll never be more than you could fit into a padded cell. These poor dopes have always been crazy anyway, they'd have to be to find any joy in Wally's empty one-track constipated prose. Good heavens, it's religious, that's all -a bloody sermon! With farmer Wally: old Pastor Sourpuss himself, moaning about this, and moaning about that, to a weird congregation of turkeys.

Really, I thought Wally was the biggest laugh
-until I found Bruce.