I can't remember what I was doing when Camilla was trotted out wearing her first tiara and I missed all the gossip about where it came from but it looked familiar to me. Now at last I've found it.
Queen Mary had it made for the Delhi Durbar when she found out she couldn't take the crown jewells with her to India. It's shown below with a row of very large pear shaped emeralds. Around her neck below a circlet of diamonds, she's wearing the necklace of cabochon emeralds which was given to Diana, who astonished everyone by wearing around her forehead. Below that is a favourite necklace of Queen Elizabeth 11, also emeralds and diamonds with an emerald drop and a marquise diamond cut from the Cullinan. 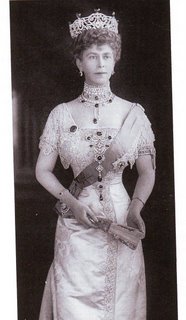 This is the same tiara but the emeralds have been removed. Unfortunately the photo is not very clear but in the front of the tiara, another two stones cut from the Cullinan diamond are mounted. These were later removed and made into a brooch which the Queen always referred to as 'Granny's chips'. This tiara was last seen on the Queen during her trip to South Africa in 1947. It was on loan from Queen Mary. 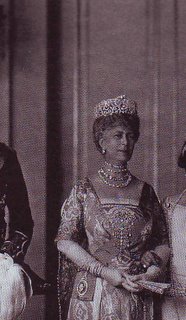 As I've said before, wearing a corset had its advantages, one could wear an enormous amount of serious bling before falling on one's face.
Posted by JahTeh at 5:32 pm

i heard a talk on the radio about Queen Mary. It was a long time ago, but what I remember is her strategy for acquiring things. If she spotted an object she liked in someone's home she'd say so -and then gaze pointedly at it until it was offered to her. Funny.

She was a ripper for doing that. She aquired beautiful jewells from the Russian reli's but didn't pay the proper price and the Queen ended up paying after QM died. Antique dealers got the jitters if they knew she was coming as her fingers were inclined to stick to small objects all the way into her purse.

It's Good To Be A Queen.