A WOMAN OF SCIENCE

If anyone thinks of deep ocean explorers, the name Robert Ballard immediately comes to mind because of his discovery of the Titanic. (an accident, he was really on a secret mission to find another country's downed submarine).

Dr. Sylvia Earle received her Bachelor of Science degree in 1955 at Florida State University, followed by her Master's degree in botany in 1956 at Duke University. She won scholarships and supported herself by working in college laboratories. Her Master's dissertation was a detailed study of algae in the Gulf of Mexico. She has collected more than 20,000 samples and continues to do so. Her collection shows the changes in algae as their habitat has changed over a period of fifty years.

She married after completing her Master's but still continued her research work on scientific expeditions round the world. She had to balance family and work even descending 100 feet below the sea in the submersible Deep Diver when she was four months pregnant. In later years some of her children worked with her at her company, Deep Ocean Engineering.

In 1966 she received her PhD from Duke University. Her dissertation "Phaeophyta of the Eastern Gulf of Mexico" was unique in being a long and detailed first-hand study of aquatic plant life as she was one of the first researchers to use SCUBA gear to aid in her work. In 1981 Dr. Earle and her former husband, Graham Hawkes, a British-born engineer recognised the limitations of scuba diving. They founded Deep Ocean Technology, Inc. and Deep Ocean Engineering, Inc. They designed and built a submersible called Deep Rover which is still operating today.

In 1970 she led the first team of women to participate in the Tektite project. The scientists lived for weeks at a time in an enclosed habitat fifty feet down on the ocean floor just off the Virgin Islands. This all women group was known as Tektite 11 because to quote Dr. Earle, "The people in charge just couldn't cope with the idea of men and women living together underwater."

After this expedition Dr. Earle went to the Galapagos Islands, the waters off Panama, China, Bahamas and the Indian Ocean. It was in the 1970s when she began to collaborate with undersea photographer, Al Giddings. The record of their voyages following the sperm whales from Hawaii, New Zealand, Australia, Sth Africa, Bermuda and Alaska became the documentary film, "Gentle Giants of the Pacific". 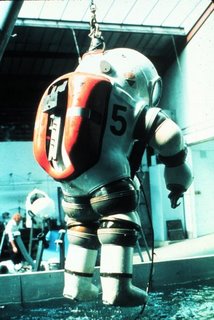 The image above is a JIM suit, a pressurised one-atmosphere armoured suit. Sylvia Earle was carried by a submersible down to a depth of 1,250 feet in the ocean off the island of Oahu. In a suit like this she walked across the ocean floor at a depth where no-one had ever been before. The only thing connecting her to the submersible was a communication line.

She's an expert on the ecological impact of oil spills, leading research trips to report on the burning of the Kuwaiti oil fields during the Gulf War. She also advised on oil spills from the Exxon Valdez and Mega Borg.

In 1990 she was the first woman to serve as chief scientist of the National Oceanographic and Atmosperic Administration. Time magazine named her their first "Hero for the Planet" in 1998.
She's explorer-in-residence at the National Geographic Society. She regards the oceans an an important and essential environmental habitat and would like to see changes implemented especially for deep ocean exploration. Of the world's five deep-sea manned submersibles, those that dive to 20,000 feet or more, the US has only one. Her company is working on one to reach 36,000 feet. She influenced the Clinton administration's decision to double the US National Marine Sanctuaries budget. She is still continuing to plan deep ocean expeditions.

I have only written about a small part of her life, I've left out the academic and administration appointments, the lecture tours and the committment to educating humans that underwater research is important to the health of the planet.

When women are good at science they're very very good.
Posted by JahTeh at 9:11 am

Hi JT...Sorry to have been away so long from your site.
Yes...What a woman!
Woman are usually better than men at most things anyway aren't they?
Hmmm...That girly rocks indeed! I was up a ladder at nine months preg trying to get a roof over the babies head (owner building) cus the prat at the time was too lazy....we just keep going without questioning. See a job and get it done kinda approach.
( Ps...My keanu is still better than that other guy you put up!)

An older woman professor was my instructor in a zoology class nearly 30 years ago. She was a really tough cookie but oh, she was so very good, partly because of that toughness. The boys didn't like her (of course) and most of the girls were intimidated. She was the prof I admired most, possibly because of her persona, and she was the one from whom I was most pleased to have had a positive letter of recommendation.

I just now spent five minutes trying to find any reference to her on google. I tried all possibilities of words and combinations. A very large university, yet not a single sign of her anywhere. Frustratingly sad.

You know, I could be wrong but I think a whole lot of women just don't have the egos that many men do. . .the egos that seek out acclaim and attention.

Yeah all very well Witchy One, but it's all about priorities. Could she knock up a batch of scones at a moment's notice?

Thought so! Not such a smart piece of skirt after all then.

The post was prompted by Barista's on Marie Tharp who died last year.
Rosalind Franklin is another who is only just getting the recognition she should have had along with Watson and Crick.

Above or below the waterline, Your Lordship.