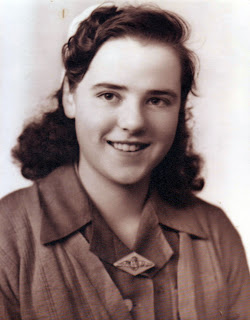 This is my mother in 1944. She'd just turned 14 and was working at Caulfield Hospital as a wardsmaid until she was old enough to start training as a nurse. She also worked at Heidelburg and watched 'Weary' Dunlop operate. She said his eyes were the kindest eyes she had ever seen. A year after this she met my father who was slowly dying from tuberculosis. A lot of the men she looked after didn't survive TB, especially the ones from the POW camps. She can still look at the photographs and tell you the names of the patients. Sometimes my father is the only one in the photo who survived. He made it because of her. They married in 1948 and he died in 1994.

She looks like a lovely kid. Fourteen sounds extremely young to be dealing with all that pain.

I sometimes wish I could have known my mum when she was my age. I've wondered what sort of relationship we would have had.

They had to grow up fast in those days and she never achieved her greatest wish, which was to go to high school. It cost too much money but she loved classical music and read whatever books she could get. She has an identical sister in looks but not nature.

Anzac Day post from a different angle. Nice. Also nice to see you misspell too. berg (sorry, in a bad mood)

Gorgeous, JT. My grandfather also contracted TB - just after being discharged from the war. He spent 2 years of his life in Royal Perth Hospital - lost part of one of his lungs. All the while, my grandmother travelled every week by train from Kalgoorlie (gold country) with two small children to visit him in hospital.

Their strength still brings tears to my eyes.

Can see where the Copper Witch mouth comes from. (Shape that is.)

Dammit Andrew, I was making sure I got the 'Heidel' right.

My Mum too, from Mentone to Heidelberg (blows raspberry at Andrew) by bus and train. She was only just turning 19 then.

Actually Your Lordship, I scrolled down to look at my son and I could see the resemblance there.

Now thats a love story! Why can't things be that cut and dry these days?

Well Neo, (like I can't guess where that name came from) it takes guts to marry a man you don't think is going to survive past the first anniversary let alone give you two children but she never loved anyone else.

Wow. Love is a powerful healer.

If you're interested (in seeing them), I saw Weary Dunlop's surgical instruments at Melbourne Museum. He had donated them to the Museum. They were in a glass case in the 'body-and something-or-other exhibit.

You know, I always thought that the old Fairfield was the infectious diseases hospital. Didn't realise Heidelberg took TB patients.

Heidelberg, McLeod and Caulfield were for the soldiers with TB. When my Mother transferred to McLeod, she said it was like Heaven with the fresh air.

A nice face...old photos are heartbreaking at times but wouldn't be without them. Sir Edward Weary Dunlop was one of the very few "goodies" and she was priviliged to meet him I think... and he her no doubt.