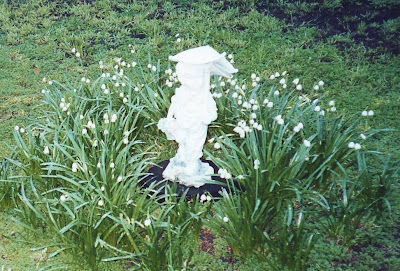 This was the only bright spot in my week. My snowdrops are up for the fourteenth year in a row. The statue is standing on what's left of the Blue Spruce I had cut down last year.

Tuesday until Sunday, that must be a record for me keeping quiet but it was a bad week with Mater doing everything short of spinning her head 360 degrees and spewing pea soup at us. Bitch phase ended yesterday, morphing into nauseous terrified little old lady phase. This change of personality is shortening to fortnightly cycles and increasing in duration. It's never gone on for five days before.

The only dish that's been washed is the cat's since he has a habit of hooking his food off the plate onto the floor if the plate isn't clean. Good thing he's old and can't see the state of the floor. I have two shoulder bags half cut out and left where I dropped and ran. Half finished blog posts are hiding in the bottom of my bag, written on scraps of paper. I managed to change the bed at midnight on Friday. To give myself a treat, I decided to put on the flannelette sheets that took me so long to pay off last year that summer hit before I could use them. Bottom fitted sheet seemed a bit snug so I clipped the elastic only to have the whole corner rip. It was nowhere near a queen bed size, only a double so I checked the top flat sheet and it's so big it would qualify for king size. Waste not, want not, pillow cases and a nightdress coming up, not that I wear a nightie but there's always one on the bedpost in case of fire.

The fat bashing continues with articles in magazines, newspapers and on TV. My own scales contribute this morning with me throwing a John McEnroe and screaming, "you've got to be kidding!!!" We'll just forget it until next week. Dr. Rosemary is at it again, calling for a fat tax on unhealthy food. She says the proceeds of the tax should fund education and subsidise the exorbitant cost of fresh fruit and vegetables for rural people. Crap, I'm suburban and I haven't noticed I'm getting cheap vegies. According to a study by Curtin University, a 15 per cent tax would net the Federal Government $1.5 billion a year, 30 times the amount spent on health promotion. More statistics, obesity cost Australians $21 billion in 2005 in direct spending (on what?), disability and premature death. Obesity-related illnesses kill 17,000 people each year.

And if that's not enough, I read in New Scientist of a link between the obesity epedemic and global warming. Apparently fat people not walking means more car use. Fat people eating more food means a heavier (haha) carbon foot print because we eat food with more fats and refined sugars. Greater food consumption means more organic waste producing more methane. Then, like Dr. Rosemary, the article starts on health. Fat people have more back pain, arthritis, shortness of breath, increased risk of heart disease, stroke, diabetes, osteoarthritis, infertility, gallstones and several types of cancer. I'm sure if the author had tried harder, he could have blamed us for the Iraq war because more oil is required to fuel the trucks to bring us the food.
His final words, "pandemic obesity is an energy vortex. It is time to treat it as the potential global environmental catastrophe that it is".

Lordy, that's made me so depressed, I'll just go and have a block of chocolate and a quick vodka to recover. Just to be totally and politically incorrect, perhaps I could sponser an anorexic to offset my carbon blubberprint. Don't bother leaving anonymous comments about being cruel and unfeeling. I'm fat and annoyed and want to pull the arms off thin people. How long before we're rounded up and shipped off to those vacant detention centres for a 1200 kilojoule and 20 km hike life style change. I wouldn't put anything past this government and I expect Joe Hockey to be on the first bus inland.

Don't leave yet, the griping isn't finished. Next on the list is the electronic card to be given to families on welfare support. This is supposed to stop parents (lazy or irresponsible parents according to my other favourite nerk, Bill Muehlenberg) gambling and drinking the money that should be spent on food for their kids. Dumbarse morons in high places, as though the parents wouldn't sell the food as fast as they bought it for booze and gambling. I know this would happen because in my extended family there exists some of the most professional welfare rorters in history. Don't forget either that this same government taking this measure to protect little children is the same government giving away thousands of dollars to parents to have children in the first place.

Done with the rants, let's go back to the snowdrops.
Posted by JahTeh at 2:26 pm

"...perhaps I could sponser an anorexic to offset my carbon blubberprint"

We're evil, Steph, one below cats on the 'born to be bad' list.

Watch it Bear, or I'll ship a consignment of Cab Sav to you in an unbreakable lock box.

"I read in New Scientist of a link between the obesity epedemic and global warming."

Those snowdrops are so dainty. My nan had them in her garden up Dayelsford when I was a kid.

On a good note, I am doing the World a favour it would seem by loosing weight then? Oh goodie :) I am really just running away from diabetes and heart disease and running towards a longer and healthier life.

True, fruit and veg are expensive, but it is worth a troll around the independant green grocers if you have some, they can have some great specials there :)

I don't drive Cazzie so I'm restricted to what I can find at Westfield which I get delivered. Years of carrying loads of food that would defeat a Sherpa have shortened me by several inches.

I call 3 kilos a fair weight reduction.
another 3 by christmas will be easy.
peace and love ...