IT'S THAT DAY AGAIN 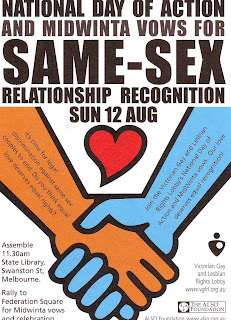 It's definitely that day again when everyone can tell John Howard and Phillip Ruddock to shove their outdated views on same-sex love and marriage. It's the anniversary of the day that an elected government (not by me) told gays and lesbians that their love was worthless in this country. By all means pay your taxes and contribute to Australia's economy but don't expect to be treated with anything but derision when you ask for the same entitlements as a heterosexual couple.
It looks as though I won't make it again this year but hopefully the weather will be as sunny as it was last year. But the Heavens will be putting on a display for the side because on the night of the 12th August, the Perseid meteors shower will be on show in the dark sky of a New Moon. 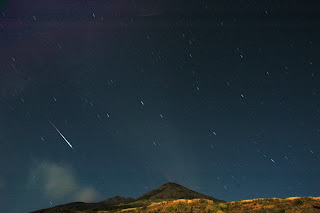 The sky will be full of meteor streaks which will appear to be shooting out of the constellation Perseus in the northern hemisphere. Earth's orbit takes us through the tail of the Comet Swift-Tuttle which orbits the Sun every 135 years. The last time it was in the inner solar system was 1992.
In the Middle Ages, the Perseids were known in England as the "tears of St. Lawrence" after the third-century archdeacon of Rome. Meteors streaked through the sky on 10 August 258, the day of his execution by order of the emperor Valerian, and reappeared every year around St. Lawrence's feast day.
In the 1860s, Italian astronomer Giovanni Virginio Schiaparelli figured out that the path of the Perseids followed that of comet Swift-Tuttle, making him the first to connect meteors with comets.
You can find more here.

Absolutely marvellous...I shall keep up to date with the whole astronomical thing..love it.

Strictly northern hemisphere, Cazzie but this site is great for southern skies if the kids are interested and there's a lunar eclipse at the end of August. http://home.mir.net/~reynella/skywatch/ssky.htm

"...It's the anniversary of the day that an elected government (not by me) told gays and lesbians that their love was worthless in this country."

Happen as may be, but they ought to remember that it's a multi-million dollar industry on the internet. Especially when custard's involved.

Are you drinking the ancestral mead again, M'Lord Hughes?

I'm getting there Link.