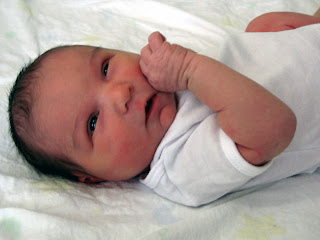 This is my blog which is two years old tomorrow and since that little girl and all the other children of same-sex parents were the reason I started, what better image could I post.

Her mothers have been partners for nearly 15 years and now they're a family but not in the eyes of this prejudiced government and sundry moronic religious groups.

In two years the subject of equality in superannuation, medicare, pharmaceutical safety net and marriage or partnership registration has risen in profile. Various liberal members of Parliament have tried their best to have laws changed. Canberra tried for civil unions but the uberrodent stomped his jackbooted paw on that social justice.

It's my hope that Charlottle's first dance will be at her mothers' wedding.

It's my hope that I'll be blogging photos of that same event.

Congrats on the blog anniversary!Here's to many more posts to come.

Lovely and very alert looking. A nice way to commemorate your anniversary.

Forgive me fer being a nasty basket .. but what happened to all the trees? Lttl ppl like that do not survive without trees.

"It's my hope that I'll be blogging photos of that same event."

Being a great supporter of the lesbian movement, especially when custard is involved, I trust you'll be blogging a selection of the honeymoon photographs as well.

Thank you - from all three of us.

My girls are coming home tomorrow morning and I can't wait!

ps she was only 4 days old in this pic - alert little darling, isn't she?

Lovely pic. I spent the weekend at a commitment ceremony for two lovely women - it was a very moving time with the two brides surrounded by friends and family. No Mr Howard, it is NOT too complicated, it's all about love.

OoC, yours was one of the very first blogs I came across and you were still at University.

Thank you Andrew, one day I'll blog your wedding.

Davo, little people is right. I'd forgotten how tiny babies are.

Hughes, Get thee away to Pompeii for those sort of photos.

K&S, after waiting so long, I still keep going over to your blog to look at her.

Frank, I hope Kevo7 is not as prejudiced as the old rodent and you're right it's about love.

Caroline, I tried to link to you for the lovely frog but you know the problem, you have a mother too.

Happy blogday to you.

Pompeii? Is that where they're going for the honeymoon then?

Congrats on the two years, and she is a most beautiful baby.

She is just adorable! Congrats to the mummies!

Congrats on your blogaversary too!

Miss Jahteh can you tell me the name of a dress that's popular now, it's plain I think and called a hoop dress or something and is a bit controversial because not all ladies feel able to wear it.

I haven't had a moment to check on your house hunting, Phil.

Mindy, I have a feeling TheMuriels blogspot is about to become a photoblog.

Steph, you're still with us in blogland. Glad you didn't let the bitches drag you down.

Rh, 'hoop dress', that's awfully 'Marie Antoinette' of you.
Do you mean the bubble dress where the hem is gathered and caught up underneath to show nobbly knees and is designed to make "Does my arse look big in this?" its true name?

So lovely... ah we need some babies in our family... miss them.

You dear thing. My daughter is part Arab, and always a most loved and popular person who can talk to anyone, and does.

I have kidnapped your observation about the Sudanese children (there are many in my part of suburbia also) and am transporting it blindfold over to my own blog, where I plan to take it behind the shed and quote it.

JT, I suspect you're right... at least for the immediate future.

Happy boggoversary and just out of curiosity - why are you such a strong supporter of gay rights? I know you cover the other ones - refugees, indigenous issues, fatism etc but you seem most passionate about this. I tried to look back through your blog but couldn't find anything to tell me why this particular issue, out of all the potential worthy issues, is the one that gets you going. I appreciate it! and I'm curious.

Not big on babies, but congrats to the happy parents.

Jeez, blogiversaries all over, what is this, bush week?
Sorry to see the old darling is giving you a hard time!
I'm convinced I'll be worse.