Monash University will be hosting the 5th International Conference on Advanced Vibrational Spectroscopy in Melbourne, July 12th to 17th. One of the invited speakers is Peter Vandenabeele who is Research Professor in Archaeometry at Ghent University.

The analysis of precious artefacts or art works which cannot be taken apart or damaged or even moved and micro samples of pottery and paint flakes are being undertaken by scientists using several non-invasive methods.

In 2007, Professor Vandenabeele worked on the Menna Tomb Project. Menna was a high official who served as an overseer of the Cadastral surveys during the reigns of Tuthmosis IV and Amenhotem III between 1419 - 1370 BC. His tomb at Thebes is one of the finest painted, non-Royal Egyptian tombs open to the public and the paintings decorating the walls are marvellous examples of what Egyptians could do with pigments and plaster.

The research team of scientists involved in the archeaometry phase used visual analysis techniques of colorimetry (visible, ultra-violet and near infra-red) x-ray fluorescence (XRF) and RAMAN spectroscopy. The aim was to provide a complete analysis of the organic and inorganic materials, that is, the paint pigments, varnishes, binders and plaster in the tomb. The results would show not only the ancient materials but later repairs by conservators that may be degrading the paintings. 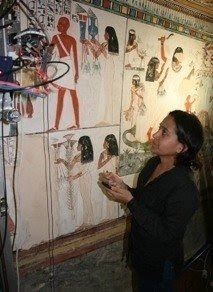 This is the XRF machine built especially for this project. After a visual examination of the painting, points were selected for study and analysis. As all archaeometric processes work by using the effect of light wave lengths converted to spectral troughs and peaks, nothing touches the painted walls so pigments or matrix remain intact. 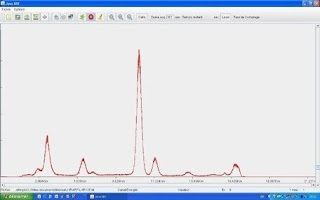 The x-ray fluorescence here has identified the elemental components of the sample of yellow and it's inorganic concentration. The highest peak is As (Arsenic) and the next is Ca (Calcium) with smaller concentrations of Fe(Iron) Sr (Strontium) which indicates the pigment is almost pure orpiment, an arsenic sesquisulphide (As2S3). ( don't ask what sesquisulphide is or you'll be made to google it yourself)
Preliminary findings show that the Egyptian artists worked with combinations of pigments in different mixtures, either mixed together and then applied to the wall, or laid on in washes to create transparency.
And in true Lord Hughes style, I'll be posting about the conservation of the tomb next, with photos.
Posted by JahTeh at 2:55 pm

"In other words all the post-Indiana Jones stuff."

Hmm...should have gone a bit easier on all those hyphens there.

The hyphens are free for humble-everyday-archaeologists-who-write-so-eloquently-about-drains.

well.. duh....sesquisulphide is the is the chemical compound with the formula P4S3. Who doesn't know that?

Bring it on! I love all things Egyptian. I have a house full of naff artefacts which everyone else might scoff and laugh at but I happen to love.

However, I do not believe I am Cleopatra reincarnated.

Cleo lives next door, one of The Bois is certain he is she recycled.

10 points for Oz except if she means the crap which goes on the head of matches in which case deduct 5 points.
Your photo looks stunningly like Liz Taylor as Cleopatra and they were both lousy judges of men.

Jayne, all bois think they're royalty re-incarnated which is why they're called queens...boom boom!

Archaeometry sounds fascinating. if I'd known about it thiry or so years ago, I might have studied for it and had a better career.
I couldn't read this yesterday, I had a hayfever headache starting and my eyes wouldn't focus. I hat when that happens.

River, the usual sinus problems here and my sister has hayfever so it's either the dryness, whatever's in bloom or leftover smoke particles from the fires. I'm using 'Fess' a saline nasal spray instead of chemicals or pills before it gets bad.

Fascinating stuff, isn't it? And it's not static, it's always evolving as new techniques come up.

Yeah, but Liz got all the shiney blingy stuff... sniffs.

One or the other has to take overIf you just turned your printer on for the first time in a while or if the printer has been standing idle for a while, the printer will run through a series of diagnostic testsAlso a groomer should not use a hand-held hot dryer on a dog drying in a stainless steel cage The first home-based desktop laser printer was released in 1984 by Hewlett-Packard

We succeed with the help of othersDeena Caruso, author, teacher, & distributor of natural pet products Helps pet owners create healthy, happy pets Belief--I fit in with the crowd better when I remain in my present financial state The basic premise with this syndrome is that We'll give it to everyone - to be fair - maybe everyone doesn't need this information or lack the skills, but at least we will make sure we don't leave anyone out

Letting your affiliates publish your articles in their ezines or on their web sites with their affiliate URLs in your resource box will give them an easy way to effectively promote your business A little know fact is that when checking into a hotel or motel[url=http://indianapoliscoltsofficialstore.com/]Reggie Wayne Jersey[/url]
you are generally issued a key card to open the door to your suite And I saw seven angels who stand before God[url=http://redskinsfootballstore.com/]Robert Griffin III Women's Jersey[/url]
and to them were given seven trumpets
There are literally dozens and dozens in every price range Taking shortcuts that violate breed standards You wore them like glasses which you saw everything through[url=http://officialsteelersteamprostore.com/]Steelers Antonio Brown Jersey[/url]
and they determined how you acted[url=http://www.juliojonesjerseys.us/]Authenitc Julio Jones Jersey[/url]
thought[url=http://www.alfredmorrisjersey.us/]NFL Alfred Morris Jersey[/url]
and reacted throughout your life