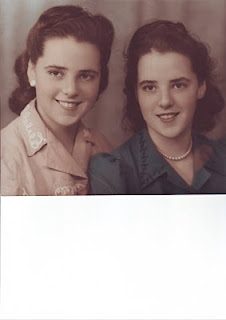 That's Aunt Selma on the right and mother on the left. I think they were about 15 in this photo.
I've finally dumped all those magnetic albums in the rubbish. I'm now down to keeping the very clear old photos where you can actually see faces. I'm getting sick of it now so all the boxes and empty slip albums are going to get shoved in the cupboard until a rainy afternoon in July.

Dear Aunt Selma isn't coming down for their birthdays in March. Instead she's decided to hold an open house for all her friends to come and see her. Mum's really cut up about it....not. She's planning on her own celebration for getting to 80 years but it will be at the home and hopefully I won't be involved in any way except walking through the front door.

I've posted the deposit cheque for the gold plated and diamond encrusted wheelchair. That could be the only reason for the cost. I did ask if she had been supervised while filling out the customising sheet and they said the physio helped her with it. It's a shame they didn't ask the girls who actually push her in it as I was told yesterday that there was at least $900 worth that wasn't needed. So the standard price of about two and a half thousand dollars went up to $5,647.00. I didn't ask if a contract was signed but I've heard from others that if you make a fuss, your name goes to the bottom of the list and it's a 6 week wait or more from when the deposit is received. So it's making her happy even if it isn't there for her birthday and I'm not about to rock the boat.

She is in the happy phase of dementia where nothing bothers her as long as she is in her routine.
I proved this yesterday by making her miss Bingo to talk to me. She got very fidgety and wasn't happy until Bingo finished and her mates came over to talk and the routine was re-established.
This morning she was out with her walker to make arrangements for the train to Mordialloc and check out a party shop on the main drag of Mentone where I found the gold doillies she wanted. Connex would never allow more than 4 wheelchairs to get on the train as it slowed down the service, OH CHORTLE, but Metro is allowing the six residents to go, otherwise it's two days out and there aren't enough volunteers to do this.

I get to stay home until Friday afternoon or even Saturday morning, colour me happy.
Posted by JahTeh at 5:56 pm

What a beauty your mother is at fifteen. Who'd have dreamed that her life would become such a trial for her daughter sixty five years later. Diamond encrusted wheelchairs and the like.

Like most children, perhaps not most but many, you deserve a medal.

Gorgeous girls, even if one grew into an Aunt Selma.

Elisabeth, I don't feel like that, I feel a fraud when I think of other people going through much worse. I only have to read Jayne's blog and all that she does to feel I wasn't badly put about.

I just hope the wheelchair is pushable for me. It would be like the old days to sit and have a coffee in the sun.

Jayne, I read an article in New Scientist some years ago that said no cell ever divides exactly in half so identical twins can have more or less than the other. Their personalities are completely different and they never felt like they were one half of a whole person. They only got on because Aunt Selma lived a 100 miles away.

Despite the awful hairdos (WW2 Victory Roll) they are both cutiepie little peaches, the one on the left more cutie than the other.

-Robert.
Secretary. League for the Preservation of Peeping Toms.

Sheesh - that wheelchair is worth twice as much as my car!

Robbert, nice to see you flying the flag for a hanging offence.

Kath, don't think I didn't ask if it had afterburners for full accleration.

Wow, your mum and aunt are really pretty. Making it to eighty, that's quite a big thing and deserves a party for sure. With balloons. Don't know about diamond encrusted wheelchairs though. If you went over rough ground you could leave a trail of loose diamonds behind you, although that could be an easy way to find your way home again....

The RH Temple of Extreme Thought flys The Skull and Crossbones.

One day it will sail

With Cannon to flatten everything.

So...I shouldn't mention we picked Dad's 2nd wheelchair (fully upholstered) up from St Vinnies for $60 after the brand spanking new $500 job broke (the company went bust before the 12 mth warranty was up)?
OK, won't mention it :P

When you come here we'll sit in Nelson Place, lights on in empty city buildings Hal Porter's ghost on Ferguson Pier you are a big lady but delicate little bird is your soul.

RH, you've got me curious. Are you talking about Nelson Place in South Melbourne? I've checked your blog and it leads me nowhere.

I'm sorry therefore to talk to you in someone else's dining room as it were.

I trust you don't mind, Jahteh.

I have a couple of good friends who live in Nelson Place.

I'm always intrigued when the virtual takes on a touch of the real.

Greetings. A poet is never accurate, but I mean Nelson Place Williamstown.

In Miss Jahteh's dining room there are many mansions.

Thanks RH. Nelson spreads his influence far and wide, from south Melbourne to Williamstown.

Oh aye indeed, lots of water between. But some days from Nelson Place I can see the statue of Christ on the Sacred Heart Church, Grey Street St Kilda.

Ave Maria this afternoon, and I broke some rules; Schubert is such a tyrant.
Murderess Trish C. came this evening and yodelled Wuthering Heights. It frightened shit out of me. But I played the accompaniment, what else can you do? The show must go on.

Elisabeth, one should never delve into the divine mysteries of the poet known as Robbbert. He is a wil'o the wisp who would lead you into the swamps of life and leave you with not an answer.

Jayne, if only it were that simple but the physio did pick up on one thing the salesman had slipped in so $96 is off the bill. Because she can't have her legs down all the time, the footplates have to be raised so her legs are almost straight out in front which stops the pain of the rheumatoid arthritis in the joints. Since she's had this old chair which supports her neck, she's been able to move it a little. It's all in the support for the crocked joints.

River, the only thing trailing mother will be me. I looked so bad on Friday that a lady in the cafe offered me a lift home. My fault for carrying a too heavy bag too far in the heat and forgetting my water bottle so I was dehydrated and out of it. On the up side I'd had a nice morning with mum and my sister turned up so we didn't leave until after 12, hottest part of the day.

Robert, while I love Shubert's Ave, there's another that I like better but the composer has slipped my mind.

wonderful pictures... we were all young once and thats the truth hey...
I have a spare wheelchair but the tyres are flat and the batteries removed...sigh

Begging your pardon but you keep leaving the C out of Schubert. What's going on? Have you forgotten how putting an extra L into Alison landed me on skid row? First she got me the arse from Blog Sarparilla, then she booted me out of her poetry workshop, and she even tried to get me put off the dole. Good Heavens! Don't ever cross a poetess, that's all I can say. Well Miz Croggon you don't write for everyone, okay? The suburbs can't understand a bloody word of it. Aunt Selma and Kitty Litter mightn't be fine art in Fitzroy but it sells like mad in St Albans.

A poet is never serious, he laughs at the world and all its worries: trains running late, good heavens. They flash past here, endless faces; romance on credit card.

Miz Grogon has a marvellous figure for a woman her age (and boy does she throw those hips around!). I'd like to examine whether she wears a corset.

Therese, pump up those tyres and charge the battery, it'll come in handy when the next flood hits and you have to negotiate the snakes.

Robbert, it must be because I have no real afinity for his music.
I should have, I suppose, considering my Kraut ancestry but the Frog genes makes me attuned to more delicate melodies.