LIFE AT THE HOME 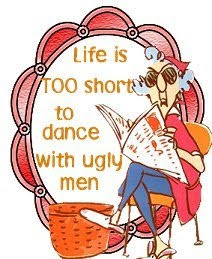 I should have had this tattooed on my eyelids before I got married and it has nothing whatsoever to do with this blog post. I just thought it might be a helpful tip to put in the spinster's Hope Chest, you know the one, it has a new toothbrush, shiny razor and 12 dozen condoms. Actually this post complete with cute photo was going to be about why Polar Bears feet don't freeze but condensing 3 pages of New Scientist to something that makes sense isn't possible after a day at the home for death's door mothers who suddenly slam it shut.

She dreamt she died last night and someone else was in her bed when she came back. And why did she come back? Because I was holding her hand and touching the rings on her finger and saying, "I know you're in there, come out." I haven't told my sister this, she'd probably break every bone in both my hands. There was a whole lot of layers to this dream and whatever they're putting in those pain patches is obviously better than a foot long spliff and I saw the effects of that at the last party.

So the old girl's back in form and up playing bingo and cheating like crazy. Bingo is very serious stuff down in the 'hood. Competition for the biggest pile of chocolate wins is ruthless and a dead heat yelling 'bingo' is the stuff of duelling straight from the Prisoner of Zenda. Every one today had won 2 games each, 2 chocolate bars each and the last game was on. My mother is caller and her method of throwing the numbers in the general direction of the board confused everyone except her. Method in the madness, she was stacking the deck, as it were. Sticking the numbers together so her rival at the opposite end of the table had no chance of winning a third chocolate.

When I pointed out the stuck together numbers, I got a clunk on the arm with the numbers box (I am bruised) and a warning stare. I've never seen a high stakes poker game at Crown Casino but it couldn't have been more intense than with these hovering claws ready to drop the last plastic bottle top on the winning number. They play with large plastic green tops so they aren't confused with chocolates and a mass choking takes place. Rival E was distracted by the arrival of a friend and quick as a flash Ma scanned the table and produced a winning number for Mr G who got a vicious look from Rival E as he pocketed the last of the KitKats. I got another clunk for nearly exposing her brilliant strategy.
Posted by JahTeh at 11:17 pm

It's worse when they hand out after lunch sherries pre-bingo game *shudder* it can get ugly.

My hubby was nearly lynched as a small child when his Mum took him to Bingo and he won twice. She covered his mouth when he was about to win for the third time because she didn't think they'd make it out alive.

Don't worry Oz, I'm pulling my chair right back if I'm unlucky to not miss the next game afternoon.

Jayne, ugly is the word. They're like vultures around a kill and that's without booze.

Mindy, that nearly happened yesterday but the visitor was canny and she tossed the numbers off the board when she saw she had bingo.

When chocolate is involved, fair play flies out the door. Period.

At least tell me that your mother shared some of her 'winnings' with you?

Cheating at Bingo? I didn't know that was even possible.

Kath, she did share a milky bar with me and I was lucky to get that.

River, apparently it's not cheating if you're your powers for good and besides she just loves to put one over Rival E.

That is hilarious and poignant all at once. And the game sounds more like X-treme Bingo.

Fine form indeed.
I used to play bingo with the old dears on the Geriatrics Ward, there was some healthy competition amongst them too and all they got was a certificate as a prize! They were so cute!

Sweetiepie darlings, loving you best I can.

The old in-and-out propels everything. What a drag.
It's why anyone does anything.
It's why I've got a Z3.

Fortunately Lad, they play around two big tables with wide gaps between but mother has a higher wheelchair then the others which gives her an advantage for checking out the numbers. I refuse to do the calling, I can't take the pressure.

Fen, they play on Saturdays and get a star for winning as there are not enough nurses around and if one started choking, they'd be gone. So the Saturday prize is a box of chocolates at the end of the year and competition is worse because they get to choose which chocolates. This lot is about as cute a rat at a chook egg.

Robbert, Public intellectual as opposed to private ratbag? Where did you boost this BMW from? Just remember cars do not maketh the man.

The Arabs gave it to me, stood me outside a caryard in Geelong and showed me The Promised Land.

Cars don't maketh the man? Now you tell me. You've just castrated half the western suburbs.

Great story, but mainly commenting because the WV is "odsoc."

The poor have everything the rich have got, but cheaper brand. Rich youth make a noise; the poor make thunder. Here's my poem, Loud.

It's his life
Don't you know

A poet writes within his class, he never tries latte set. There's too much already -of so little.

Jesus Mary and Joseph - and they say the Bearpit is competitive

Phil, that's right on the ball,they're all odsocs. I offered to make plastic numbers for them to make it easier but that idea was rejected and now I know why.

Therese, never stand in the way of an oldie getting chocolate and rival E would run right over you to get to the crisps packet.

Robbert, how did you know my all time dream was to own a Chevvy Impala. Parking it might have been a small problem but the cruising down the highway, I can still see me at the wheel.
Good poetry, when are you going to publish?

I see you at the wheel too, going down Chapel Street, me in the back, tossing petals.