PRECIOUS IS ALL MINE 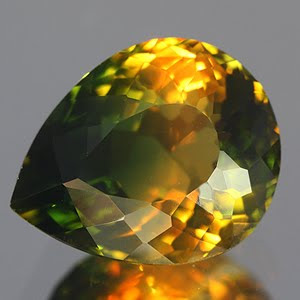 24 carats of gold and green ametrine for $3.79 which was the lowest bid.
So what did I get?
No country of origin listed so possibly a synthetic Russian lab created stone.

The other gem I'm going for has Brazil listed as Country of Origin so that could be an amethyst heat treated for the golden part then irradiated for the purple to turn green. Amethyst and Topaz are the stones most often heat treated or irradiated.

The only place for real natural purple/gold Ametrines is the Anahi mine in Bolivia. The mine was a dowry for a conquistador named Don Luis Felipe when he married Princess Anahi from Bolivia's Ayoreos tribe in the 17th century.

The Russians have been producing synthetic (hydrothermal created) ametrines since the early 1990s. It has the same physical properties as the natural stone but any colour combination such as sky blue and golden yellow, green and yellow or orange with blue is suspect.

I'm happy as long as the colour is as depicted and the facets are sharp enough to make the bling sparkle. A lot can happen in front of a good photographer, like making a crumby stone look like a million dollars. I mean I've seen Easter Eggs that cost more than this.

It's a very pretty stone JahTeh. I hope it sparkles for you as it does in the picture. After all, the sparkle is what you're paying for. There's nothing worse than a dull stone.

Is pretty.
So long as it makes you happy is all that matters.

Jayne, I'm a very cheap happy. An ice-cream, a cold beer, cheap Tuesday at the pictures, crotch watching, they all make me happy.

River, it didn't cost as much as those chocolates Kath reviewed but it will last longer. They were nice but I kept thinking of the dollars I was eating. I'm all for cheap thrills.

What is it, plastic?

The Williamstown Literary Festival (world event) roars again from April 25. I haven't been back since getting thrown down the stairs by five grey-haired feminists (Miz Croggon's fault). But I might turn up this year, I'm encouraged by the new mayor, Bill Tehan; he looks like a brickies labourer ("Hey Bill, can ya lendus a tenner?"). Meanwhile worn-out old trollop Catherine Deveny has actually been invited.
Why? Goodness knows. Maybe to give old Bill a head job.

That is just so beautiful - funny that something that comes out of the dirt or rocks can have such light and coulur...

Robbert, it's quartz but made in a laboratory to get the colour change.

I hope you are applying to read your poetry? An ode to Miss Croggan or a dirge for Deveny.

Therese, last time I was in my favourite gem shop, the girl asked if I minded waiting, I was in heaven and no I didn't mind. Next post I'll put up something divine for you.

Miz Croggon is 48 and looks 23, more curves than the Yarra Boulevard; 38-24-38. Good Heavens!!! And she's married to a lady man!
Well too much rooting gives women a fat arse, too little makes them feminists, romance is somewhere between. Old Bill Tehan is a neighbour of mine; I know him well. He's put his cock in some funny places, but shown a gob like Deveny's he'd prefer an alligator.

Robbert, I'll have you know my fat arse was not due to that.

I thought about that. But went ahead anyway.

Into the Valley of Death rode the Robbert.

What's happened to my comment, the one prior to me riding into the valley of death?

Your comment has disappeared and so has one from Brian in the next post. They were both there last night.