Heaven in a grain of sand 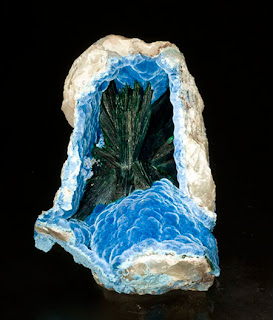 This is something remarkable and it measures just 7.5 x 5.4 x 3.1 cm.
The vug (a small cavity in a rock or vein, often filled with crystals) is of shattuckite in a blue velvety botryoidal (like a bunch of grapes) form coating the inside. As well there is a spray of acicular (needle shaped) malachite which is dark green with tiny clusters of needle shaped crystals.
There have been a number of these specimens from the Kaokoveld region of Namibia, south-west Africa but it would be hard to go beyond the beauty of this piece.
And I gave you all the meanings so you can kill the competition at Scrabulous.

Looks like a view of Heaven according to Ronald Searle.

Had to go search the difference between geodes and vugs, feral offspring will be most impressed.
Beautiful vug :)

That is just so marvellous...thank you

It's a what in a what? Such long words JahTeh.
If you squint a little it looks like the open mouth of some alien species, just have to picture the top of the head and a pair of eyes there......
The malachite spikes are pretty.

I nearly said in that post that I had a vug but decided no, Fleetwood would be on that like a rat on ripe cheese. If it was Roman, you wouldn't be saying that.

Jayne, I can safely say to you, I have a vug. It's filled with tiny pointed crystals and looks like fairy land.

Therese, my sister can't understand why I pay money for things like this. I was at the gem shop on Tuesday and because it was slow, all the glass cases were opened for me.

River, You've just described dear Brian to a tee except where you said the spikes were pretty.

I think it's time for an Aunt Selma Kitty Litter post.

RH. His Times And Testimonies.

One day in Pentridge I was given a wheelbarrow and sent to a metal hatch in the wall of H Division. A guard with me unlocked the hatch and a prisoner inside began shovelling broken rock into the barrow. He kept his head down but at one stage glanced at me. I don't remember his face but will never forget the look on it.

When I left Pentridge I went straight across to the pub and bought a packet of smokes. Then I sat on Coburg station. The train came and I got in. I took a cautious look around: innocent lambs; my jailers.

I've seen a photo of a bird, drenched in oil and beyond help.

We may as well confess, all seven billion of us.

Big Woman is in traction after downing a pavlova the size of her house. The Alfred has never seen a case like it. She was floated there in a hot air balloon, arms and legs over the sides. Good Heavens! But never mind, RH (to help her out) will post on. That's right.
Well I don't know what you think of a bloke who bumps his mother and inherits half a million from it, but I think it's ridiculous. His social workers (all social, no work) think it's disgraceful but can't say so.
Up the stairs they come "Hi Geoffrey," they say, full of bullshit. And (on the sly): "Is Robert getting money from you?"

OH!- Bank-Bothering little mongrels!
Well I do things for him, Okay? And it's not like "Oh yes, Geoffrey!"
"Very nice Geoffrey!"
"You're so right Geoffrey..."
I do things for him, spruce him up a bit, adjust his bloody collar in the middle of the street. "Don't just throw your clothes on," I tell him, "And go straight out, make sure they're on straight!" Yesterday he decides he wants to go to Northcote. Then he says he'll go to Fitzroy instead. Well you'll have to have a haircut I told him, you can't go to Brunswick Street with that half moon on your noggin, they'll throw things at you. I got out his K Mart clippers and gave him a kojak. He put up a fight "I don't want a haircut", he says, but zoom-zoom and it's all gone. That'll be sixty dollars I said. He counted three twenties from his wallet (took forever) then I grabbed for more and we had a wrestle during which I managed to seize another twenty.
We sat down. "Say what you like," I said, folding my arms, "Eighty dollars is a bloody cheap cut in MY poofter salon!"

And laughed and laughed. And I laughed too, to see him so merry.

How lovely. And therapeutic. Both ways.

Big Woman has made medical history, stunned all the professors. No human being could eat that amount, that's what they're saying. But she bloody well did. And now is downstairs in the canteen, eating lamingtons, drip in and all.
When I was a boy about five I was taken to live with people whose neighbours around the corner were a family of ten kids. I spent a lot of time in their house, having meals and all. Sleeping there too sometimes, up the opposite end of beds with nine and ten year old girls. They taught me how to catch fleas, these girls, and split them down the middle. That's what we did at night. Their big brothers were brawlers, coming home in taxis and refusing to pay; the older girls would rush out: "Here's your money, get going!"
The older girls used to go to Leggets dance hall, doing up their faces in a bit of broken mirror above a sink in the sideway. Betty Noonan was a brunette about eighteen. When I first arrived there I was on the front veranda, back pressed to the wall and everyone inspecting me, then Betty rushed out from the doorway and kissed me, darting away laughing. That's what she was like. For a while she had a boyfriend who had a motorcycle, I remember him whizzing her up and down the street. Then she had a bloke with a big American car, I saw it out the front of her place one morning with him asleep in the back. Eventually she got pregnant and disappeared for months, coming back without the baby.
When I was about fourteen I was moved away from that area and forgot about them all. Then one day about ten years later I was walking up the ramp at Flinders Street station when someone coming down punched me on the arm, I looked around and it was Betty Noonan, continuing on her way. I kept going too, but now I'd have yelled "Hey!" and hurried after her. What a pity it all is.

Miss J still laid up, I took her a bunch of flowers and she ate them. She is one hungry woman! The staff want her our before she eats the whole hospital. That's a joke, if anyone knows where she is they should say.

I'm living in Newport. My pals the latte set are creeping in. Old wooden houses where five generations lived are getting slaughtered, replaced by shitty little prisons: commodities. They'll never be homes.
I'm not far from Newport Railway Workshops where I began my working life aged fourteen. The buildings are still there, haven't changed. The people are gone that's all, most of them dead. I was a 'Lad Labourer' that's what we were called: assistants to the older men. The buildings were corrugated iron, surrounded by dusty ground. Huge thistles grew against the walls, or anwhere they could. I was in the electroplating shop, a small part sectioned off from the metal polishing room which rumbled all day from belts on overhead pullys. Blokes stood at machines pressing carriage fittings against fabric wheels, some using their thighs to help out. Every Friday the boys from the electroplating shop were supposed to sweep the floor. How ridiculous, the floorboards were blackened, sticky from one hundred years of metal dust you couldnt glide a broom over. But we sprinkled water down anyway, and made a show of it -which is all that was expected. There wasn't much work to do in any event, we played around most of the time. The supervisor was a kindly old coot in a dust coat, seated all day in a glass cubicle at the end of the our section. Whenever I was late (which was often) he'd eventually come toddling up to me. "What time did you get in this morning laddie?" And I'd tell him. "Go up to the office," he'd say, "And get a Please Explain." So off I'd go for a stroll, up to the administration building with its geraniums out front. I'd get the Please Explain form, write some bullshit and take it back to him. "Thank you, laddie."
The electroplaters wore baggy trousers and old sports jackets. I remember that clearly. (It was a thing of the times, my old man dressed the same, at home or at work.) Two of these blokes, Hookey and Harold (who looked amazingly like Harold Holt) had an argument some twenty years earlier and hadn't spoken to each other since. That's strange indeed in a smallish place with only about ten blokes in it, but this was the railways and you accepted things you'd call strange anywhere else. The job was a bludge and you'd hear all the time about it being a 'dead-end job' but the blokes there were the marvellous fun they always are in places with low wages and nil prospects. And anyway, it was secure; not much was expected of you and it was hard to get sacked. It happens that some blokes are content with just enough wages to get by anyway, family life being everything; they could even afford a small house back in those days.
When the old supervisor retired he was given a good send off out in the metal shop. There were speeches, and he was given a present everyone dobbed in for. In the end he gave a little speech himself in his faltering voice, getting interjections from the official wit. Finally he shook some hands and walked to the door. There was silence for a while. I was standing near old Hookey, suddenly he began dashing about for something, he grabbed a stick and began bashing it against the wall, the others were doing likewise: thumping the machines, the floor, whatever they could with whatever they could grab, as the old boy passed through the doorway for the last time. I'd never seen a send off like that before and haven't since. It was bewildering to us Lad Labourers. As lots of things were. We were only boys.

RH-I'm a bit concerned by the abscence of our witchypoo too. I hope everything is okay with her, her mum, her knees, etc.

Thank you Robbert, holding the fort for me as usual.
I will be back as soon as I get one hand out of the straight jacket and pick up what's left of my mind. It's around here somewhere, I just hope I don't stand on it, that would be the end of it.

Awfully crude of those professors using a straight jacket to stop you eating.
But who's surprised, the Alfred was always a bloodhouse anyway.

I almost believed RH at first - sucked in...but did query about being able to get Lamingtons downstairs in any Australian hospital - usually Gloria jeans and some other food chain store - lie subway - these days

Therese, slap yourself for believing Robbert, you know the man is evil especially when he mentions pavlova and I would kill for Pav right now.
I refuse to have anything to do with GloriaJeans after their partnership with the Hillsong mob and Subway is the ultimate con in advertising. It all looks so inviting on tele but the taste of the product is ghastly.