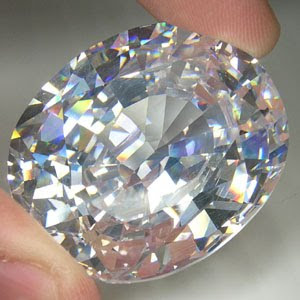 A synthetic stone is not a fake. Synthetic describes a gem made in a laboratory which has the same basic chemical composition and similar chemical, optical and physical properties to its natural counterpart.

Imitation is glass or plastic.

Synthetic diamonds have essentially the same composition as natural diamonds but usually without the flaws like included minerals that come with the way diamonds are formed. Manufacturers are now deliberately putting flaws in their stones to fool the eye or a jeweller’s loupe.

There are now instruments that detect the synthetics. When placed against a natural diamond, they emit a sound but not with synthetics.

A cubic zirconia is not a synthetic diamond, it’s an imitation with a different chemical composition. It also weighs more than a diamond which is why it’s always sold by size not carat weight. 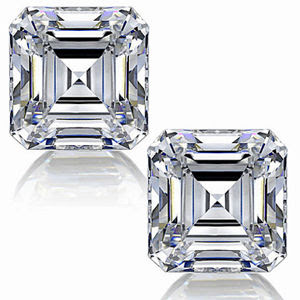 So now to eBil.

1. Buy from a reputable buyer (Ha!) in Australia so you can hunt them down and kneecap them.

2. If you do get lab diamonds, you have to make sure that they’re hand cut and polished not machine cut in a factory in China.

3. Have them appraised by someone who knows the difference between Czs and lab diamonds or a jeweller who has a beep machine because they don’t beep.

The large stone at the top is 207 carats and from Thailand, in other words, take your chances.
The square modified Asscher cut ones are mine. I paid .01 cent for them because nobody loves a square diamond that doesn't sparkle larkle larkle like 207 carats of bling. They're machine cut because I can still see the tooling marks on the back of one of them and they don't have as many facets as shown here but I didn't expect much for one cent. Tomorrow I'll find out if they're lab diamonds, CZs or glass.

Just by looking, I can't tell the difference between different stones. But I suspect one of my regular customers has the real thing on her fingers. The flash and sparkle with every little hand movement is really pretty, and her ring designs are beautiful too. Another customer has larger stones in more ostentatious settings, but they look dull,and scratched, so I'm betting they're fake.
Having said all that, I like the look of that top stone much more than the square ones, which are still very nice.

River, the verdict's in, Cubic Zirconias but at least not glass and they do shine.
The larger stones are probably just from Avon although my Avon rings are quite well made. But they have to be cleaned and cleaned regularly and kept in a dust free environment. It's amazing how many women will still garden and do housework with good rings on their fingers.
If you do have to clean rings, never fall into those sonic cleaning things, they can do real damage.