One down, two to go

Oh look, Shiny, Glittery and never to be worn by me except in dreams. Actually I could wear them as long as I used those poles, the ones skiers use to stop from falling over. I worry about those heels though, whether they've been industrial strength tested. 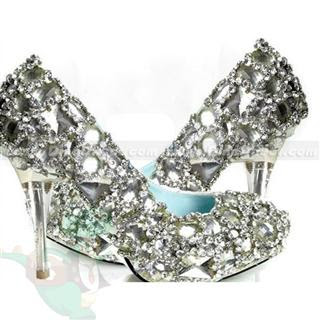 Finally I made an appointment to see the podiatrist on Monday and she better be worth $62. I do get some back but it means a bus trip to Southland and a walk past the book sale. I woke up in the middle of a dream the other night because of shooting pains in my big toe, the one that didn't get the toenail ripped off in January. So there I was in the middle of the night with nail clippers in one hand and a torch in the other, just making sure I didn't have an ingrown toenail that had become infected in the few hours since I'd taken off my slippers. Yes, I know it sounds insane but turning the light on would wake me up too much so I used the torch and if you think I'm going to tell the podiatrist why my toenail looks lopsided you're crazy. 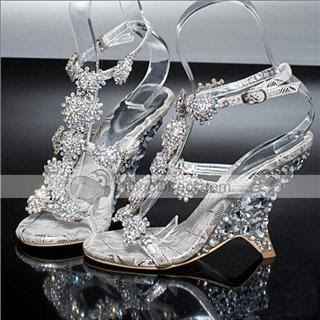 Another pair of frou-frous that are not for my fat footies. Try saying that after a few beers. How on earth does one walk in these? But stupid me, if you can afford to buy these, you don't have to walk, the chauffeur carries you to the red carpet. That brings me to the last photo and the joy of my life. 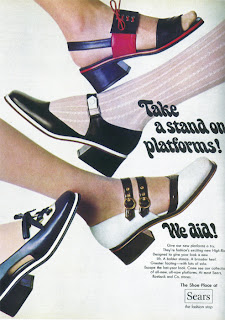 After a week of walking home from the station, walking to and from work in stilleto heels, my first pay packet went on the latest from London. Lovely flat heels, funky colours, painless walking. I paid $5.00 for them, a pretty aqua green and did I mention, flat. I haunted odment bins since I have moderately large feet which is why I fall over a lot, my feet get in the way but with my size there were always sale shoes for the grabbing. Anyone my age will know the feeling that I get from the knees down when I see fashion parades or stars waltzing around in hightower heels. Fashionable they might be but I still remember the relief of those green shoes.

My second pay packet started a lay-by for a jewell. Now that hasn't changed at all.

This is very close to home. I have large feet. My mother had large feet, my father had wide feet. I (you guessed it) have large wide feet. Once when looking for sandals the snippy young assistant told me in horror 'we don't make them THAT BIG - try men's wear. I can't tell you the things I wished would happen to her. Stilettos were agony. Flat shoes are bliss. (So is some jewellery). Sigh.

stilt-heels are masochistic.
a podiatrist looked at my feet and said "well you'll never wear 'occasion shoes' again." ... and I have not had occasion to, actually.
Next to teeth for eatinX ... biting into chocolates, our feet are the next most important thing to preserve, and I do hope the mother of Harper Seven works it out soon.

Wishing you a wonderful weekend.

been battling to get shoes in my size all my life and I LOVE flat shoes...Blundstone boots are even better ;)

You came to a decision early. It is funny to watch older women stagger in high heels.

You bought shoes from London? As in, London England? Online shoes?
Can you email me the website? I'd like to have a look. I have difficult feet to fit too. They're not large, but they are wide. Try finding nice shoes in a 7D. Everything out there is a B fitting, maybe an occasional C. This is why I stick to sneakers most of the time. I get them at Athlete's Foot and pay an arm and a leg to keep my feet comfy. It's the least I can do after they've carried me for so many years.

Happy birthday you ole trollop you. You don't look a day over a dreamy green-eyed svelte lad of your dreams.

Those shoes.!? Do they come with orthotics for an old codger with a heel spur and a recovering herniated disc?

Thought not. Diamonds on the heels of my spur don't mutt the custard.

Have a good one! Blow out the candles with gusto.

Happy birthday Jahteh! Those shoes from London look really nice. Hope the visit to the podiatrist is fruitful - I'm going through the hell of foot trouble myself ATM, so when I say I feel your pain... :-)

and be glad you can't hear me singing.

Happy Birthday Jahteh. Some savvy footwear merchant should bring those styles back, they'd make a motza.

EC, don't you love those assistants. You needed Miss O'Dyne to deal with her, she has a way. I always blame my size of foot from running barefoot in my wild youth. Even these platform stilletos are monstrous. I remember them as well, comfy to wear but try walking downhill as I tried going down Bourke St one night hanging on to every parking meter.

Annie O, I think it's too late for her. I don't think she'd ever be able to flatten her foot to the ground without extensive physio. It's the equivalent to Chinese foot binding.

Nice try, Jayne but I wouldn't be able to lift my feet in Blundstones. Another thing of terror is a child whizzing throught Southland with those hidden wheels in their sneakers.

Andrew, I have to admit you're right although politically incorrect and ageist but I have seen drag queens walk with more elegance than some after Cup Week.

River, we're using the Tardis here, going back to the swinging sixties which you are far too young to remember.
Sneakers are just as bad for me, they're all too heavy unless you've bought yourself a pair with wheels. I can see you whizzing up and down the grocery aisles.

Thank you MiLord, what you need is the old fashioned servant and rickshaw combo. One does regret some things about the demise of The Raj.
Terrific birthday when you get to take your own cake to the oldies' home. It was a sticky date cake, yum and my mother yelled at me for taking the syrup date off the top, my own cake!

Helen, I am pleased to tell you that I might have funny fat legs but that doesn't stop an excellent pulse and blood flow to my tootsies. It's very strange sitting there and hearing a heartbeat coming out of a foot and the machine has a print out as well. Only one tiny ingrown nail which she whipped out with what looked like a Swiss army knife, large size, no significant callouses or cracks and slight nerve damage from either my spine or the diabetes. Smiley face for me.

Mindy, there are always homeypeds but even they're not as comfy as they used to be and Kumpfs, win the tattslotto first then look at them. I did buy the Homeyped diabetes slippers but in the middle of the night try slipping the feet into those without velcro-ing the dressing gown up as well.

Glad to hear the footspert found all is good in the toes.
The gowns at abednigo but online they make it too hard to buy tickets.
X X

I have enjoyed reading your articles. It is well written. It looks like you spend a large amount of time

and effort in writing the blog. I am appreciating your effort. .

I found your this post while searching for some related information on blog search...Its a good post..keep posting and update the information.
Podiatrist in London