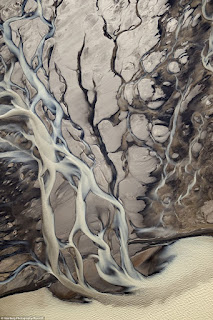 Here's another image from the Haarbergs from 9,000 feet above Iceland.  We could do a "What is it?", no?  Well the big white bit at the bottom is Langjkull glacier and the rest are small melt water streams. Please for full greatness, do the clicky thing.  I have a wide screen monitor so I turned the image clockwise and it makes a fabulous desktop wallpaper.

I'm back from a visit to the Home.  The Accreditation people said they had to take down the photo of the escapee from the front of the door for his privacy but they were able to leave one on the inside of the door.  Didn't do much good today when he was literally plastered to the glass door with two people inside wanting out and two outside wanting in.  The guy outside with me was a newby and didn't know not to open the door, fortunately people inside could see the photo.  I knocked on the admin window and it took three people to peel him off the door and cart him off to the office.  New guy said why didn't they put a notice on the outside as well.

Mother extremely happy with iPad, keeps her off the phone to me.

What a beautiful photo - at first glance (before reading your explanation and doing the big click) I thought it was some kind of wood and glass art sculpture....

The 'escapee' reminds me that I read the 'Iris' memoirs last week that were written by her husband, focussing on what it was like to love, live and support someone with Alzheimers. She too was an escapee but once she got out, she'd come back inside as she couldn't bear not to be next to him!

I'm disappointed with the image. When I clicked on it, all I got was a black screen. So I saved it to my files and I'll look at it later.
What a shame the escapee doesn't escape to his own room. where someone could accidentally lock the door.

What a wonderful, wonderful image. Perhaps I could escape to Iceland.
Sometimes I think that the serious professionals (like the accreditation people) don't have either foot in the real world.

Kath, I'll be posting the other photographs and I tell you I wouldn't have been the one hanging out of the airplane.

When he gets out, he goes fast but doesn't know where he's going, he just knows he's out.

I'm going to end up there, I just know it. I was sitting next to Eva yesterday who kept telling me it was a long time between the trains pulling in.

River, you can't lock them up there unless he's in the nurses' station. He falls down all the time but when he gets out, he's off like a train. I stood back from the door yesterday as he already has a hate on me for not letting him out. I think he remembers the red hair.

EC, it's cold and icy but remember how many volcanoes it has. If you want your fill of ice go to http://www.aad.gov.au. That's the Aust. Antartic page with fantastic photos of ice.

Hello, possums, I've missed reading your blog.
Catching up - yay on the iPad for mother, sounds like a great plan.
Re the unstable chap - slip in words like "expectation of physical safety in her home" and the like, there are policies galore on both residents & staff having the right to safety.
He needs geri-psych assessment, and suitable meds.
I sang in G&S and thought of you!

Jayne, he's on triple meds when he's aggressive. They know what he's like and can handle him, it's just visitors like me who have no patience to calm him down. I feel terrible because I have no patience with any of the oldies, too many years with mother.