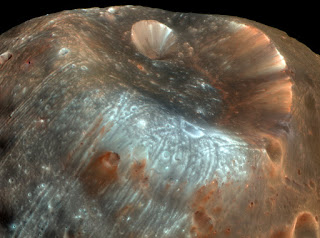 This is Stickney Crater on the martian moon Phobos.  Stickney is over 9 kilometres across which is nearly half the diameter of Phobos itself.  Astronomers think that the impact that blasted out the crater probably came close to shattering the moon.
The crater is named after Chloe Angeline Stickney Hall, mathematician and wife of astromomer Asaph Hall who discovered both Martian moons in 1877.
The image is colour-enhanced and was recorded by the HiRISE camera onboard the Mars Reconnaisse Orbiter as it passed Phobos in March, 2008, at a distance of 6 thousand kilometres.
Phobos does have surface gravity but it's less than 1/1000th of Earth's gravity and it's thought that the streaks in the photo might have been loose material sliding down inside the crater walls over time. The light bluish regions near the crater's rim could indicate freshly exposed surface but the mysterious grooves along the surface may be related to the crater-forming impact.

So great photo of a hole on a moon about which we know not much.

I can't give you an amount of money spent on Mars exploration or the current wars on Earth but I wish it could all be given over to oceanography so we can find out about our own planet before it ends up looking like Mars.

I don't begrudge a cent spent on the Hubble Telescope though, the images it has sent back to Earth has increased our knowledge of Space more than we could gain by roaming the galaxies in tin cans.

At first glance I thought you had a close image of a giant jellyfish.
I agree the Hubble Telescope is money well spent. I think we should be exploring our own planet and oceans more fully too.

Pardon me, other planets have better telescopes than the Hubble, strong enough to watch the powdered poonces in Chapel street. Or you scoffing a cream lamington at Southland.

And what's wrong with war? It keeps the population down.

River, I just signed a petition banning genetically modified salmon from being marketed. We've had enough trouble with ordinary farmed fish escaping and knocking off the wild salmon.

Robbert, I could kill for a cream lamington right at this moment.
War keeps the arms manufacturers rich. The population is doing okay just by driving cars into each other.

Coles sell cream lamingtons at $5 a pair in a little plastic box.

To get your way
Chocolates are okay
But nothing entices
Like vanilla slices.

You're out of luck Rochester, I like French Vanilla slices, that's cream, custard and coffee icing. Expensive but I'm worth it.