How much renewable energy could we have by burning redundant politicians, 'let them eat cake' Hockey could burn for years! 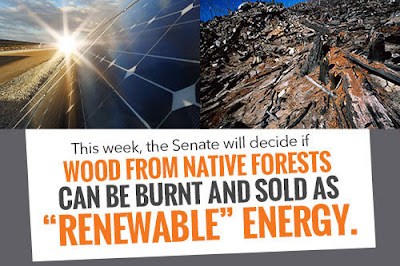 On Thursday, Prime Minister Tony Abbott used primetime radio to boast about cutting clean energy, calling wind farms "visually awful" and arguing "I would frankly have liked to have reduced the number a lot more". 1

Now, his government is kicking straight into action by rescheduling a parliamentary vote for Monday morning to slash jobs and investment for Renewable Energy Target (RET).

But here's the kicker: Monday's proposed legislation won't just cut investment in clean energy. The Abbott Government wants to redefine 'clean energy' altogether, by including burning native forests in the Renewable Energy Target. A move like this could see the open slather logging of forests that our Australian wildlife depend on for survival. Just as terrible: every native forest cut down and burnt for electricity takes away from capacity and more investment in the clean energy of the future - like solar.

That's the email I received from "Get Up" today.  Does this idiot realize how long a native forest tree takes to become "renewable" again?  Are the animals renewable, you know the ones who shelter in trees, on trees or underneath trees?  Does this troll of a politician know how much carbon trees take in and oxygen put out for us to breathe?  Does this entire political party have a brain cell between them that can estimate the damage of trees burnt and sold as "renewable" energy?  Well, the way the Mad Monk obviously sees it, most of the liberal (I refuse them a Capital) party have been living in the shadow of wind farms and have been permanently damaged by it.

Oh, here's a clue.  Let's build solar reflecting panel farms in our famous red and flaming hot centre. Too expensive  or you don't know what they are?  It's a shame you don't have a Minister for Science to explain it to you.  He could also explain about building wind farms in windy places because the wind is free.  Never mind we'll have lots of windy places when all the trees are cut down.  Perhaps the Minister for the Environment could look up "Mallee" and see what the ignorant did to that region.
Do we have a Minister for the Environment, as in for all Australia not just looking after the grounds of Parliament House and making sure no-one sneaks a wind turbine up there considering the free hot air that flows from that asylum.  Oh dear, there goes another trigger word, Hello ASIO.
Posted by JahTeh at 3:54 pm

I saw and responded to that GETUP message yesterday.
Our Tone is planning to investigate whether wind farms have a negative impact on health, but is promoting coal. Oh dear.
I would much, much prefer a wind farm in the neighbourhood than a coal mine. But what would I know.
He really is an oxygen thief. And I bet his stinking government did pay the people smugglers to smuggle asylum seekers. Anywhere that isn't Oz. Hiss and spit.

The babbling babbott continues to babble *sigh*
Does he think of this stuff himself or does he just memorise and spout what people tell him to?
I think wind farms are a great idea, we have plenty of windy coastline to put turbines along and places in the interior too.

Nice work Copper Witch, tightly put together and easily digested. I'm afraid I am bit overloaded by green/get up emails and I missed it, meaning I deleted it without reading. Btw, you get a gig in tomorrow's blog post. That'll learn you for meeting up with us.

EC, they actually say that "Get Up" is a terrorist group, can you believe that? Miss O'Dyne has been up country and passes said wind turbines and thinks they look fine in the right place. Peta Credlin must be spitting chips about that smuggling money leak. I love the way they keep speaking about what the Labor Party did (didn't agree with them either)as though they lost the election last week. I'd like to see the moron test they have to pass to be in the Liberal Party, must be a beaut, answered using coloured crayons.

River, I swear if you turned him upside down there'd be no difference in him speaking out of his backside than out of his mouth. Although probably louder since the ears would channel the sound straight at us.
After reading about the property portfolios the polies own, we'd have wind turbines everywhere if they'd bought windy coastal properties.

Andrew, you swine, to start with before I read the post. I'm a bit that way with GetUp and Avazz so I choose what I support. Don't you love the rahrah about developing to top end of Oz but we might have to import skilled Asian workers as though we didn't have enough jammed on Nauru and Manus Island.

proving I'm not a robot by recognising cooked animal flesh just slayed me. just in from the rain where I was herding uncooperative cows back to where they broke out. helping the owner because he swung by to include the one which spent the afternoon in my front yard.
Wind turbines are beautiful and getting close to them is strangely calming and peaceful.
I love all those smokers who wail about the health risks of wind power.
Over on Twttr we vent our spleen on all your points. Who voted for these turkeys anyhow? name and shame I say.

It's quite clear, even from this side of the world, that Tony Abbott is an arse.

That is an absolutely ripper post Jenny. I've been fighting with Jaala Pulford on Twitter. Unfortunately, she thinks it's a greeeeeeaaaaaat idea...

Um, so THAT's what have done wrong all my life - forgot to marry a rich wife ... heh

Annie O, I'm glad you said that, I find them mesmerising and over in England they even have them out at sea but don't tell the Mad Monk that or he'll be building them on the Great Barrier Reef and telling us he's saving the world.

Plasman, You should see the entire Government Party gathered together, their stupidity can be seen from space. The Speaker of the House, mate of Abbott's has just thrown out the 400th member of the opposition and I don't know who I loathe more, it's a close race.

Helen, there are some people you just can't argue with, it's like punching marshmallows, everything bounces off. Even plantation pines take years to grow let alone our beautiful old growth trees.

Davoh, look around, not too many rich women to choose from. Would you really want good old Gina the Grasper?

You might qualify for a new government solar energy rebate program.
Find out if you are qualified now!