I'm still with you 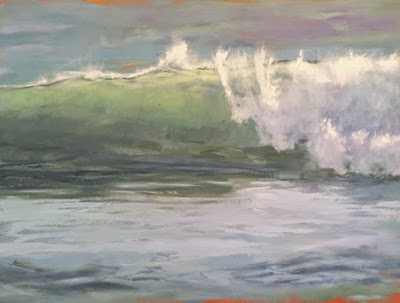 Watching waves is always calming but since I'm freezing I think I should have put up an image that had sunshine and palm trees framed with a large gin.
Bad days for the last week or two or maybe a month.  It started with me trying to help myself by looking up bloggers from before the "mother days" and re-contacting.  Ten years makes a big difference, twitter, reddit, facebook, instagram and me still barely able to turn on the computer. I've just spent two days and most of one night trying to get a twitter account until I twigged that I was putting down the wrong phone number. I have an account but I haven't a profile or a tweet to my name yet.  It was Twitter's fault combined with Firefox who didn't let me know that my background heading had been discontinued for some reason and that made twitter lock me out of the account as being a suspect tweeter.  At least I'm still anonymous in case the ex is on twitter. I still can't work facebook, haven't a clue how to comment and twitter only gives me a certain time to comment before they slash that account. I forgot to look at the post count but this could be my 2000 post.  I still remember the shakes at trying to set up blogger and that was on dial up.  I miss XP, so simple for dummies and I'm only on 8.2 after 10 nearly sent me insane. Updating is out of the question, I've been trying that for a month and just fail fail fail keeps coming up, updates download but won't install so stuff you Microsoft.

Now for Andrew, news from Queenscliff. Low light Queenscliff is on from May 3 to June 30 with a host of music, arts and culinary events.  There's simultaneous burning of sculptures in the main street, followed by a nude dive off Queenscliff pier and one for Highriser, a whiskey masterclass at the Queenscliff Brewhouse plus music.  Details: lowlightqueenscliff.com.au
Yes something else I've forgotten, how to hide links but I've found my cheat sheet and I'll start practicing.

Only have one load of magazines to go through and that's finished. It didn't worry me throwing out the craft, wedding and Vogue but this lot is different. I keep coming across memories and I'm surprised at how much of a belt it gives me.  Ben Ean Moselle, that taught me not to have more than one glass and does anyone remember Mateus Rose? I'm sure the girlfriends and I only drank this to put candles in the lovely shaped bottle. A shop advertising the very expensive handbag in black patent leather that took me ages to pay for.  I was suddenly back in time, walking Bourke street and staggering down Collins Street hoping the trains weren't early. And "man spreading" is not a new thing, we had one on the Frankston line, he'd get on at Highett, force himself between two girls and spread those legs. It must have killed him when the red rattlers gave way to the blue trains (am I right, Andrew, blue trains).  Too many bad memories have surfaced and added to the depression I already have, not made any better by not one person emailing or phoning to tell me about the arrival of little Riley, already a week old. I did send the photo (nicked from facebook, only reason I have an account) to my sister who emailed one word back, gorgeous.
One word, I swear there's a sinister invisible machine at the Queensland border that sucks the brain out from anyone crossing the line to live there. Election time was the only time we really talked but now nothing, next thing I know she'll be voting One Nation.

And send love to Antikva who was going to start blogging again but her 7 year old grandson had an hour long epileptic fit this week and is okay now but she's still recovering.
Posted by JahTeh at 3:45 pm

I don't play twitter, Instagram or FB. And admire those who have the energy and the brains to master the complexity.
Glad to hear you are still with us. Just.

Sadly I am back to work for a few weeks so no time for the Queenscliff Low Light. Besides, it is a long way to travel and R refuses to stay at Sister's anymore. Yes, blue Harris trains. I don't think I've had rose since days when Mateus was around. That is very sad that you weren't told of the birth of your great grandchild. My best wishes to Antikva, someone good in my memories.

El Chi, I've found twitter better than facebook because I'm following Penny Wong, Antony Green and Laura Tingle, politics can't get much better than that. I see Bolt is blaming the voters for making a hash of the election, ho ho. I tried re-tweeting something but I don't know where it went.

Andrew, she has kinship custody of the 3 grandkids now and has done a fantastic job of looking after them but epilepsy is frightening as he stopped breathing this time and she was starting CPR when the ambos turned up and took over.
I don't think you'll miss much with the nude dive off the pier, I remember how cold it is down there in June.
The Harris trains were luxury after the red rattlers. Now that I've remembered Mateus I might treat myself to a bottle but the price won't be what I used to pay.

And I keep meaning to email you, but then I read all the blogs and move to the TV chair to watch the zillions of shows and movies that K has given me and after that I'm brain dead until dawn. Have you learned how to send and receive text messages on your phone yet?
I remember seeing Antikva's comments on your blog, I don't think I ever visited hers. Sorry to hear about her grandson. My brother has epilepsy and used to have a fit most nights as he fell asleep when he was very young.

Brava! dear JahTeh, for having sifted through the magazines and duly dispersed the ghosts with the dust. When I began the literally dirty job of downsizing, I realized the truth of my mother's observation that opening each box was like digging up the dead. Perhaps that's why the job is left undone? One senses that it makes more difficult any effort to live in the present...a task best scheduled for a bright, sunny day?

Another random observation that might be relevant: A recently divorced acquaintance asked me to "understand" that she would not be joining in future charitable projects with our group because being with us kept her linked her to a painful experience. It was a matter of her feelings rather than our actions. I do almost "understand" her decision. At least she had the grace/courage to offer an explanation rather than simply "ghosting" us.

Commenting on blogs is as sociable as I'm ever to be on media, and now that G+ ist kaput, even that profile is lessened. Facebook is the 21st C version of a party-line.

You have inspired me and I have been sorting out a jumble of sheets and an assortment of items from the linen cupboard. Yesterday I found my mum's fancy work doilies which brought me almost to tears, I miss her so much.The cupboard looks much better now and it will be easier to find things quickly. The bed for the gorgeous cat who visits us is undisturbed on the shelf so he will be happy. I remember Mateus Rose,happy memories there.

River, I'm with you, useless in the mornings but come alive mid afternoon. At this moment I supposed to be collecting kibble for the cat but I couldn't get out of the house, he has enough for tomorrow.
I can receive text messages and send but the other day I could not remember how to turn the letters into numbers. As for twitter now that I have it I don't know what to do with it although following the Politicians and reporters has been good.

Beth, it has been a 'digging up the dead', so many memories I didn't need to be reminded of. I was a terrible flirt but didn't have a boyfriend or like boys touching me so they were in no danger but my girlfriends turned on me like a pack of wolves all because the boys liked flirting and no touching. I tucked that side of my personality into a little box and hid it.
Sorry for your friend because she said it herself, 'linked to a painful experience' and it would have been better for her if she had the courage to ask you for help and unlink the memory. I think it took enough courage to face you.
I read all that rubbish on blogger and have no idea what G+ is or any of the other stuff. Facebook keeps sending me groups to join and I was tempted to find out what sort of people were in the "Pink Fairy" group.

Cheryl, would you like to pop round and do my cupboards? My lounge is still piled up with mum's objects but the level is dropping gradually and I anticipate being able to see across the room by Christmas. You've just reminded me I must see what price Mateus is these days, considering what I just spent on cat food, kitty litter and tomorrow his kibble plus taxi fares.

G+ is Google plus and I think it's probably similar to google chrome, as in something "they' want us to do and something "we" want no part of.

oh River - don't do Guggle+ it should be called MINUS. After I went on it, bloggers who weren't on it, could not comment on my blog.
Mateus Rose used to have raffia wrapped bottles but not anymore and $12.99 the comments at Dan Murphy page are all good.
addicted to Twitter - so much good stuff and when my Aussie followers are asleep, my UK & USA friends are on. 1205 witty followers have saved me from the 3AM pain-induced suicide plenty of times, and when major news breaks Twitter has it first and the most detail. And of couse there's #CatsOfTwitter

Annie O, ebay has empty bottle of Mateus and the price, upwards of $25. I race out to see if I had one left with a candle and I'd thrown it away. Next one to call me a hoarder gets clocked.