My mind is drying up. 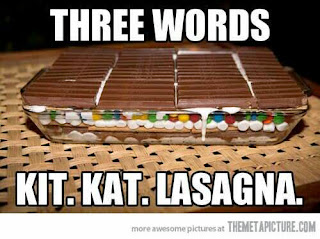 It's a shame that I kept the photo but lost the recipe.  It must be easy, just Kit Kat, white marshmallows and coloured jubes.  I'd rather just open the packets, putting it all together just to eat it seems a waste of time.  The less I do, the less I want to do.

No I will not be 'phone apping' tonight.  A sneaky contract to Amazon without including Australian bidders does not inspire trust with this government. Our Crime Minister has said all information will be held in Australia despite the face that any American company can be compelled by the US to hand over any information held in cloud storage which means it really isn't safely held in Australian hands.

Yesterday I decided to go through my mother's Hope Chest. I'm trying to collect all family papers in the one strong box to make it easier for the poor executor of my Will since my sister has refused the job.  I've just made rules for this, do not read any of her diaries. I have diaries of my own mostly written to keep the Doc up to date on her condition but to go over my father's battle with cancer and my son's death is not good in isolation. Apologies to anyone who sent cards for her birthdays but they are going in the bin. As a break, I then go and throw out books for the op shop but will they ever take anything again.

I don't think there will ever be a vaccine for the virus. It may slowly disappear in time but it will always be somewhere. Think about it, so many bodies buried with a dead virus contained but a disaster at some time in the future may bring it all to the surface. If I had a child I would not send them to school.  Write down all the things kids do at school, it's frightening.  I'd be sending mine off to school in a full hazmat suit.  Sorry for all of you locked up with fighting monsters, trying to homeschool but think of all those outback mothers in the early days, breakfast, cleaning, homeschooling, sewing, baking, feeding animals.  Those women were giants compared to us.

And now my opinion of the day regarding the mad mango. He knows he's losing everything and I believe he is wanting to go out in a blaze of glory, an assassination, a grand funeral and a giant monument.  "I almost saved America but look what they did to me".
Australians are more practical, we will wait until scooter chokes himself by putting both feet in his mouth.

Is this too sour a mood, probably.  Only because like most of us, we are sick and tired of the lies and selfishness of Politicians.  Send kids to school when you go back to Parliament and earn your pay. We won't forget $181 for a politician's lunch and $6 a day for our oldies in stinking Aged Care Homes.  I think I'll go and sweeten myself up, I just remembered a bag of musk sticks in with the tea towells.  Shows how long since I washed a dish.

Rather a lot of agreement from me - but sadly no stash of musk sticks.
I do wonder whether scotty from marketing will be able to slash social security payments to their former abysmal level after six months. I hope not, I really hope not.

I was a bit puzzled about the home schooling fuss. It has been happening in Australia for a long time, sometimes as you point out because of huge distances and sometimes just by parental choice.

You are probably correct about vaccination, and there will be another one, hopefully not as bad.

Andrew, have you seen a class full of grimey kids, you can practically see the germs, viruses and bacteria breeding and they do love to share. And consider how many of these have to use crowded public transport to get to school. It will be interesting in 2 to 3 weeks to see if the virus count goes up. The incubation period can be 1, 2 or 3 weeks. Scooter wants everything back to normal before the big Hillsong do in July so he's bullying every one as usual.

El Chi, I just found a Christmas card I was going to send to you and a present went with it but I haven't found the present and I can't remember if I sent it. I know I sent River's and Andrew's is still sitting in the box.
This virus and the effects on people who've recovered will go on for a lot longer than has been reported. And he might have a Eureka moment if he just drops the payments before there are jobs to be had. Loved how the Ruby Princess was shuffled out of harbour before the Captain was due to give evidence about the order to berth the ship. And the questions are still hanging around about Hawaiian holidays. I wouldn't be too smirky I was him.

Mmmm, sweet stuff. I'm really beginning to miss that. I didn't at first, but the lack of snacks is getting to me. I'm crabby and sleepy and can't seem to get anything done. Except for the walking, that's still happening, although only one walk today, because I did 2 x 2 miles yesterday and I'm aching from that.

Yes, it has occurred to many that the POTUS is fraying a bit. His latest "musing" about drinking disinfectant alarmed very young scientists in our family. Sadly, some of the MAGAs have attempted to drink the Koo-Aid, thus prompting the kiddos to wonder if they could read.

We've tried to reference more positive news as online teaching cues, e.g., referencing the exploits of Capt. Tom and tying together the Queen's message with her broadcast of 1940. Hey, Greatest Generation? And pix of my Victory Garden are making the rounds, explaining to the kids that some of the heirloom varieties were indeed on the family table 70+ years ago.

My friends among the first responders echo your observations about maintaining social distancing until a vaccine is developed -- and then the anti-vaxxers will present a challenge. As one cop with a degree in history (don't ask) remarked: "It's worth reading up on the 1918 Flu, but what might be more relevant is the Black Plague." He shares your apprehensions about the political spin on our response as well as your fondness for KitKats.

Beth, one of the things about 1918 flu was that some people did not die but did not recover either, just went into a long sleep and I mean years until they died. I've mentioned before that our family is not a kissy family because of tuberculosis which is a bacterial disease but it is still with us even with a vaccine so I see Covid going underground for a while then resurfacing. Friend in England found some cleaning agent of a bright pink colour and called watermelon and I thought of Kool-Aid and mad Americans.
Actually the Black Plague is so interesting being two of them and virologists wondering if one was a virus and one plague spread by the fleas on rats but both coming from Asia.

River, I just had a load of sweet things delivered for Mothers Day and remembered that it is next Sunday. It is, isn't it?
No walking for me today, it is freezing and the wind is right up from the Antarctic.
Now I have to go and hide the sweeties and forget about them until I'm desperate.

hello darlings, dopey O'Dyne has locked herself out of her login so it's just me to agree with everything you said. We like lockdown and shall keep doing it as we read of massive 2nd phase infections.
Getting through Mothers Day is easy if you have a media blackout & Whiskey flavoured or GIN flavoured chocolate or better still, both.
Love to youse all

I always loved that little Bwca. You shut down half your blogs, barred me from logging in to one blog and haven't blogged since Christ carried a cross so I'm not surprised if you've locked yourself out. Is your password something with two zeros in it like my farcebook?
It's pension day so now I'm off to ebay to buy another box of cat food.

I really appreciate  DR AKHIGBE,my name is LAURIE HUGHES . I will never stop testifying DR AKHIGBE , Happiness is all i see now I never thought that I will be cured from HIV virus again. DR AKHIGBE did it for me I have been suffering from a deadly disease (HIV) for the past 2 years now, I had spent a lot of money going from one place to another, from churches to churches, hospitals have been my home every day residence. Constant checks up have been my hobby not until this faithful day,  I saw a testimony on how DR AKHIGBE helped someone in curing his HIV disease in internet quickly I copied his email which is drrealakhigbe@gmail.com just to give him a test I spoke to him, he asked me to do some certain things which I did, he told me that he is going to provide the herbal cure to me, which he did, then he asked me to go for medical checkup after some days, after using the herbal cure and i did, behold I was free from the deadly disease,till now no HIV in me again he only asked me to post the testimony through the whole world, faithfully am doing it now,all the testimony of DR AKHIGBE is true  please BROTHER and SISTER, MOTHER and FATHER he is great, I owe him in return. if you are having a similar problem just email him on drrealakhigbe@gmail.com or you can whats App his mobile number on +2348142454860  He can also cure these diseases like HIV and AIDS HERPES,DIABETICS,CANCER, HEPATITIS A&B,CHRONIC DISEASES, ASTHMA, HEART DISEASES, EXTERNAL INFECTION, EPILEPSY, STROKE, MULTIPLE SCLEROSIS, NAUSEA,VOMITING OR DIARRHEA LUPUS,ECZEMA,BACK PAIN,JOINT PAIN. .ETC .please email drrealakhigbe@gmail.com    or whats APP him  ..+2349010754824.  he is a real good and honest man.
website...  https:drrealakhigbe.weebly.com