What happened to spring? 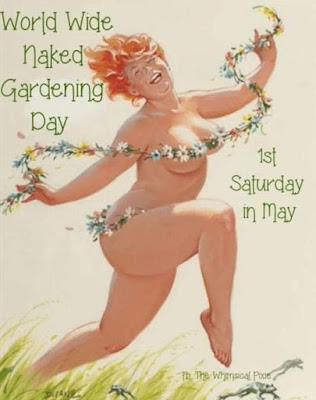 This is something I didn't know but I'll try to remember it for next year. Those were the days when I could cover the bod with a string of flowers now I'd need a couple of hedges.

Still cold in November so I'm still falling asleep in front of the tv during one program and waking up in the middle of another, makes for some interesting lessons.  I've never eaten Abalone but I now know that it costs a fortune to buy, there are greenlip or blacklip Aba's. They are actually an underwater snail and if you cut them they can bleed to death.  They like to live in S.A. in the same ocean as the great white shark which makes life interesting for people in wet suits trying to make a fortune harvesting Aba's. They were even more nervous in the show I watched because a pod of killer whales - NO, they're ORCAs, you know the big black and white ones. The pod turned up and chewed up a great white shark so the sharks pissed off for a week or so.  Very nervy when you know they live here but can't see a fin but can see your money disappearing.  I know I wouldn't be wearing a black wet suit, too much like a seal but there must be a rainbow suit I could buy that has "Orcas are my friends" printed on the back and I'd want a very big boat.

Christmas is coming closer in case you have forgotten.

I would LOVE to see a pod of orcas.
And I hear you on the seal resemblance. A BIG seal.
I am so not ready for Christmas.

No need for a Christmas reminder, thanks.

Some time ago I woke to the radio news alerting me to a new alliance between Australia, United Kingdom and United States. Why, I wondered did they call it after whales? Orcas! I remained puzzled until I saw AUKUS written.

El Chi, they actually had the attack on film, 3 Orca and one shark. They really made a meal of it. My friend who moved to the bottom of Tassie not only saw a whale and calf going back to cold water but had a perfect position for the Aurora last week. She said the only thing wrong with Tassie are the natives, mad as snakes but the sea life makes up for them. I am looking forward to Christmas because a bottle of real French champagne is for me before Scummo Indue cards all us poor pensioners and I stand in solidarity with Macron who knows a liar when he hears one.

Cameraface, I saw your cake cooking. I love that AUKUS, sounds just like up chucking which suits Scummo to a t. Your family is getting like a small country and I hope they all vote Labor, no anti-vaxxers like my granddaughters. I hope never to see them again, their father would be heartbroken.

Gosh, I think I missed a good show. I'd love to see a pod of Orcas chewing up a great white shark.
I'm falling asleep in front of the TV too these days. There's no point going to bed, because ten minutes after I get there her upstairs starts walking around with shoes on above my head, even without shoes she has a very heavy heel strike.

What interesting things you see a pod of orcas and a shark would be headline news here in the UK! I nod off in front of the tv every night and wake to find half the program has gone on without me!

I think I stopped them putting pineapple in the cake.

In a previous life I studied the Ordovician oceans of the American Midwest. Amongst the critters cavorting therein were cephalopods, giant gorgeous relatives of the abalone. Found one poking out of a roadcut that was good enough to be accessioned to the collection of a local college! Those were the days when I wore Red Wing boots, rather than hospital issue non-skid socks. Thanks for reminding me of those happy days in the field, dear JahTeh.
Can't say I ever tiptoed in the tulips like the flower-clad lady pictured -- but I did feel that good, once upon a time.

I'am glad to read the whole content of this blog and am very excited,Thank you for sharing good topic.
Premier League

I knew a cardsharp who'd been an Abalone diver and who cleaned us out playing poker every morning coming off nightshift at the old Mail Exchange. There were glass cabinets in his flat displaying relics illegally taken from the sea bed. I was dealing in stolen goods at the time and he knocked some of that as well. If he wasn't the most slippery character I've known he was close to it. He smoked roll-your-owns in a cigarette holder, smoked them right down to nothing.
Your granddaughters are young, impulsive. Don't be hasty. After all, who in a rage broke your daddy's TV table? (And was forgiven for it?)
Eclairs and inactivity have made poor Robert so wide it's hard to get cover behind anything now. But goodness me, another very funny posting from you, self-deprecating, as is your way. You've just won another Daffy tie, coming soon.

Robbert, 5 days in the Alfred after a month of various pain things. My nephew took 3 days off work and cleaned house in case of O.T. visiting and deciding I couldn't come home. Did it without asking as well as feeding cat so he deserves everything I have.

Thanks to everyone who commented. I am only able to sit for 30 mins and I am doing what I'm told. One joy was finding El Chi's cake in the fridge, I had forgotten. Will post soon and I am fine.

Three days? It would take an army to straighten up my joint -beginning with a conference about where to start.
And The Alfred, what a bloodhouse!- you're lucky to come out alive! I grew up within shouting distance of that gloomy old dungeon and it was notorious. It's been rebuilt, modernised, but nothing changes; nurses, doctors, have always sneered at the lower orders.
I've been away, trekking the Grampians. My daddy grew up in Stawell, so I investigated that as well.
Anyway, expect a missive soon, through the PMG. My pal Geoff tells me he sent out 32 xmas cards and got 2 back. He made a long story of it, ending with a strange giggle.
Keep well.
-Robert.