WHEN I WAS YOUNG 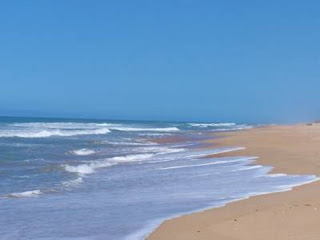 In my last post I mentioned that my copy of "The Sea Around Us" was falling apart. The view above of the Ninety Mile Beach in Gippsland, Victoria is the reason. My sister and I used to take the train to my cousins and we would all go to this beach.

We would spend all day walking along the beach, to the beach, home from the beach. We hardly ever saw anyone. On one side of the sand dunes, it would be so scorching hot, we'd be jumping from grass hummock to hummock. On the sea side, the wind would be blowing a gale. It's the only place in the world where you can get 3rd degree sunburn and frostbite at the same time.

We never swam here. You could see the rips from the top of the dunes so we would spend the morning digging the biggest hole in the wet sand then dig a channel for the sea to flood into our private pool. We almost drowned our youngest cousin by putting him in a hole and watching the tide come in. A couple of Nuns out for an evening stroll made us take him out. I make no apologies, the kid was one of the worst whingers ever born and it was a consensus decision by all concerned. Thanks to the do-gooders we spent the next week dragging his stroller up and down sand dunes.

It was the perfect place to sit and watch the waves roll in. I used to try and pick which were local and which had rolled in from New Zealand. We used to listen to the weather report every night and pray for storms. Cornish wreakers had nothing on us when we heard the wind come up and the surf get louder. The pickings weren't much but our imaginations were. An old boot had us looking for the body. Dead sea creatures were subjected to rudimentary necropsies. The biggest storm we ever experienced left the shoreline littered with all sorts of gemstones which I learned later had probably been dredged up from the off-shore oil and gas explorations.

Only kids would know why we would take an hour to drag home a piece of driftwood to sit on when the holiday shack had plenty of chairs. Sometimes my aunt would turn up with lunch but mostly she stayed away and left us alone. I suppose she thought we'd all stay together and be safe but we would get bored and wander off to do something that interested one and not the others. That was one problem with the beach, you could walk for miles forgetting that the wind was at your back until you turned for home.

I haven't been back, too much development and too many people now. I'd never get away with singing off-key into the wind.

I think the ninety mile beach is as dead and deserted as it always was. Mile after mile of beautiful sand and pretty waves and no one there. Pity the water was unswimable and icy cold.

What a beautiful story. Does your youngest cousin remember you all trying to get rid of him?

Our family holidays were always at Lake Conjola (some of my family live in the area now) which abutted Conjola Beach.

It, too, was one of those beaches where it was dangerous to swim because of rips. It was usually deserted as you see it in photo.

This new Blogger is very intrusive, isn't it? Everytime I leave a comment on a Blogger blog, it tries to force me switch to the new one which I don't want to do.

Ron, you'd better watch out. One of these days BetaBugger is going to render you impotent.

JahTeh, I loved your story. It must have been so very nice to have relatives like that with which to spend such remarkable times. Thank you for this one, too.

The beach is Andrew but not the miles of scrub behind the sand dunes. The water was like ice and even after digging the swimming hole we'd wait for it to warm up.

He never remembered Meredith and I think we might have dragged him out when the water got to his neck. I like to think one of the five of us would have cracked.

Blogger says you won't lose anything but Brownie says she's lost Crystal and her Chandelier blogspot.

I rarely see them now Kurt. Our family isn't one of those close knit clans and we drifted once we were married.

Lucy, I am enjoying the house renovations and I hope Baz isn't like our cats who couldn't keep away from wet paint. The minute I opened a can they were right in it.

That beach looks wonderful Ron, but I've found since the knee replacements that I can't walk on sand, my legs go every which way.

Loved it, them, and the beach.

Back when Paynesville was a village.

My sister -Mad Lynette, owns four houses in Bairnsdale, all furnished from the local tip. She herself lives in a brand new house on twenty acres -also furnished from the tip- with two horses, a cow and three pigs -all fed from the dumpmaster behind Coles. She also has a passing parade of suitors very handy for doing work on the place until one by one she boots them out!

Davo, you'd be surprised at how much Paynesville has come up in the world. Big houses and lots of money in real estate. Moving with the times like everything else.

Rh, I would believe anything you tell me about your relatives, knowing what mine are like.