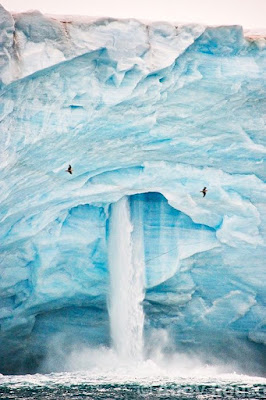 Scientists  have just put out a report that there is such a thing as "baby brain", where pregnant women, some women, are just not at their best.  Hands up all mothers who already knew this and could have walked all over this research.  It's only small things like forgetting where you left the car keys or the car or the car with the husband sitting in it.  Baby brain seems to hit more in the third trimester although I swear mine went way over 9 months.  I wandered home with groceries, vaguely acknowledged a cute kid in a pram and didn't realized until I was halfway down the street that the pram and kid were mine.

That photo of ice coldness is my favourite at the moment.  Do your friends tell you they remember summers much hotter than we have now and how fantastic the days were?  I wouldn't, I hated the heat, hated not being able to sleep, getting burnt walking to the letter box and never having enough ice blocks for cold water drinks.  I couldn't wait for Autumn.  Warm days and snappy nights.  So Ex and his blonde have moved house, even further away from me, lovely.  I now have another hobby, how high is the temperature where they'd moved to, currently mostly 40 degrees, bwahahhaha.  She hates the heat.

And today is the end of the first year of President Dumbkins, only three more to go.  He says he's kept all his promises made during election, he's forgotten that most women loathe him, of course they are fake women.  He also carries fake fat, it's not there, you're not seeing it, he's svelte but I want proof.  Him and Abbott, swimming, matching budgie smugglers, I'd pay to see that.  He'd have to put diving weights on his hair.

Don't forget the 26th, National BBQ Day.  Get in early to bludgeon a marsupial for the barbie.
And waste another million or so dollars for fireworks, a real waste when Mother Nature has put on a fire display for nothing in the last few weeks.

I might enjoy it this year, Bombay Sapphire comes in litre bottles and it's on special, a gift bottle of wine that has a hint of passionfruit after taste and 4 cans of DoubleBlack Vodka.  The vodka was stuck at the back of the fridge, I thought it was diet Coke.  One can makes me see double, 2 cans would make Highriser look  like George Clooney.  But as you can see not one animal was injured in the making except if I trip over the cat.
Posted by JahTeh at 3:48 pm

LOVE that chilly photo.
I think it is ironic that the most successful President the world has ever known (and the smartest and the best lookings) gets his govermint shut down for an anniversary present.
I think the 26th will pass us by. As usual.
Enjoy your vodka and your Bombay Sapphire. Someone in the house (and it wasn't the cat) has given me a nasty coughing, sneezing, aching lurgy. I hope to kick it to the curb quickly.

The photo cooled me off a bit just looking at it, thanks. I never believed that Baby Brain thing because it never happened to me, but Science can't possibly be wrong, so maybe I just didn't have enough brain to be losing any? I must have a little more brain now, surely I learned a few things as I bumbled my way through raising them?
Is there something special about the 26th? Hmmm? Apart from all the shops being so inconveniently closed.

Ahh, lovely bit of voddy and gin, chin-chin, m'dear, I shall toast you in spirit, wherever I happen to wash up on that day.
I will be celebrating, of course, for tis the day of The Rum Rebellion!
(Pinched the following from some geezer off FB)

The 26th of January is also the anniversary of the Rum Rebellion in 1808, the only military coup in Australian history.
It's simple.
Declare January the 26th to be Rum Rebellion Day.
Everyone gets pissed on rum, marches on Parliament and deposes the government for the vicious, lying fascist pricks they are.
This would be done as an annual event.
Beats the fuck out of elections.

I don't get George Clooney at all and would not want to look like him. There are some great photos of frozen Niagra Falls around at the moment. Barbeque Day or Rum Rebellion Day are fine with me.

Bombay Sapphire is the chief ingredient in the Gurrtini. See "Disney Legend Bob Gurr drinks gasoline" on YouTube. Mr. Gurr is the last survivor of the original 18 imagineers. He cautions that although his recipe is "practically vegan", it's for "seniors only." Note that he is an extremely active octogenarian.

El Chi, weather and high pollen count, I check every morning before I take a good breath outside. You're going to hate next week with all 30s and a bonus 40. I think I'll dip my lemonade icypoles in vodka and freeze them.

River, I was too busy throwing up to think about anything. I admire Duchess Kate for having a third go at this baby business.

Jayne, was that the MacArthur Rum Rebellion where they dragged old Bligh out from under the bed? I like the way you think and don't forget to make it Australian rum and just to help the farmers, let's start the morning with Pina Coladas with Qld pineapples and move to the straight Bundy after lunch along with drawing a name out of an old dunny, one Parliamentarian to be burn in effigy when the sun goes down.

Andrew, you're gay, you're supposed to like anything in pants, Cory Bernardi told me so. (Jayne, let's have Cory for the first burning, he's tall and should light up the sky for hours) George is smooth, one of the pretty boys who's aged beautifully not that you haven't aged somewhat gracefullykkkkkkkkdamn nose just hit the keyboard.

Beth, I've never heard of a Gurrtini but since I fall down a lot when sober I might give it a miss. I vividly remember my first Martini, felt very sophisticated until it hit the empty stomach and all parts of me stopped working. Every time I hear the phrase "frozen like a deer in the headlights" I can taste the gin.