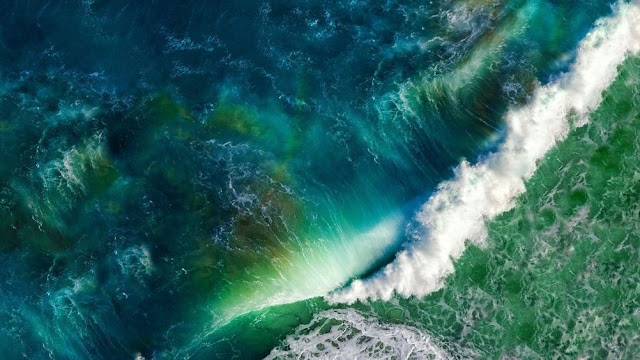 I was putting a few pictures in folders last night and forgot to change back to the desktop background I had.  When I switched on this morning my head went round in  circles and I pulled back in the chair.  It had to have been taken from a helicopter and it felt so real I felt I was almost out of the door into the sea. Memo to self, do not take helicopter ride, anywhere.
It didn't help that I felt dizzy and my throat is sore and I am tired again. I was getting better and had been out walking but a letter from Department of Human Resourses dropped me down again.  I have to pay back the nearly $1000 which they said was not part of mum's estate. Please nobody tell me to fight for it, I haven't the energy and the Catch 22 is that I have to pay up first then fight to get it back.  I paid and drew a line in the sand over the whole affair. I had promised myself I would not be told to do anything I didn't want to, unless there's 'egging' a politician involved. I could be talked into a dozen Xtra large right between Dutton's eyes, I might even take them out of the carton.
I'm not telling the others, nephew needs every cent he has and my sister would want to fight the DHR rather than pay her share.  But I felt myself sliding down the hill again so another day off from dragging furniture and definitely no moving the oven to clean underneath so I could take photos to show the store.
The stove is attached to the gas by an extension hose so I can move it around to clean underneath, great idea until I was suddenly fat and old.
Now we get to the big question.  What comes first, buy the new stove, same as the last, or buy the plumber to give me a quote to do the gas bit. This new generation just throws everything out so will the plumber know what to do with the fittings I have?  Remember the nice new phones that Telstra gave me? They're still sitting in the box because my other phones had different plugs and it will cost me money for the free phones for a technician to fix up all the different fittings.
I do remember the days when you could walk into the Gas and Fuel shop, pay the bill, order a new stove and a gas fitter came with it. See I was gearing myself up to do this when the letter came and I couldn't be bothered putting on the list of 'do this now', podiatrist, eye test, hair cut, find out about the heart scan, find somewhere that sells bed bases and takes the old one away.

Maybe it is me but there seems to be too many people to argue with these days. The taxi driver went on and on about electric cars and how he'd be forced to get rid of his precious car.  I politely said it would be years and years before anything happened and off he went again.  I went back this time, told him to remembered when cars became common, the government didn't make everyone rush out and shot their horse and burn the buggy. He didn't get a tip after he told me I needed a new walker.

Next week's temperatures are all in the high 20s, Autumn weather, dragging furniture weather, painting weather and please,feeling better weather.
Posted by JahTeh at 4:30 pm

Definitely feeling better weather.
And sigh (a big one) on the other things which are besetting you at the moment.
I would happily join you in egging Dutton. I dislike him even more than Mr Rabbit which says a great deal.

Be careful what you wish for. The old Gas and Fuel might return with a new Gas and Fuel monstrosity building at Fed Square. We bought a new gas heater and replaced a hot water service and paid them off on our gas bill. I don't think there was any interest applied. Ha, see what Origin Gas would think of that. I think you will find plumbers still know their trade.

Re the taxi driver, some people are just too stupid to engage with.

El Chi, my father used to pin photos of politicians that he hated and I mean pin, mum would be looking for her sewing pins and he'd be busy stabbing in eyes and mouths until the election was over. The winner was the poli with no face left. I have a feeling that Dutton would qualify for nails instead of pins.


Andrew, I don't think I can do that because of paying by Direct Debits, besides I'd rather pay now, waiting for the next sales and Good Guys have the model I want.
I thought the Apple Store would end up looking as bad as that, looming over Fed Square. It might have been bad luck moving the Indiginous shop to do it, land grab all over again.
I love getting the taxi driver that runs the hair brush over the front seat when I get out and leave it covered in white cat fur.

Feeling better weather is wanted by just about everyone I think, we have 32C and hot north winds today so I can't step outside for longer than to check the mailbox.
I remember the gas fitter days very well, my dad was a gas fitter in Port Pirie and he used to fit a new stove then straight away take out the factory fitted "piezo" ignition because they were made not to last and he would put in a better quality one right away. Then the housewives wouldn't have to be calling up the company when their stoves/ovens wouldn't light up.
I also remember the days when anything new being delivered meant the old one would be taken away if you asked. These days if you want the old anything taken away they charge you extra for that. K had the old fridge taken away when the new one was delivered, but a year later when a new freezer was delivered it cost $100 to take the old one away!

Those were the days, River. I'm still having to go halfway in the oven to light it because the piezo ignition didn't last.
Getting a new bed is just as bad, try having that taken away for nothing.
My neighbour takes my bins out for me after that episode of falling in the road but he's had the flu so I very carefully wheeled the big re-cycle bin down to the gate and then the red one so he wouldn't have to take them far. He's just been in and told me it's green bin day tomorrow. Now I can hear my son laughing his head off.